Kellyanne Conway on Prospect of Romney as Secretary of State: 'I'm a Concerned Citizen' 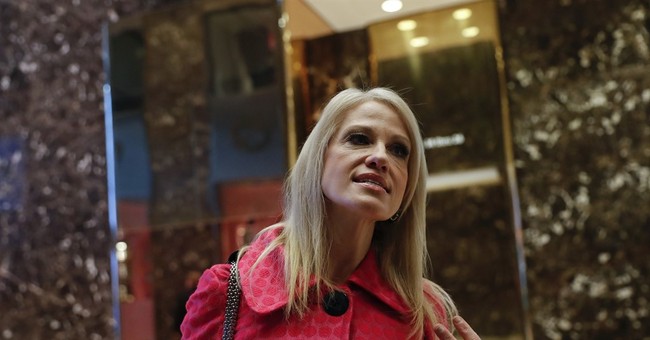 Making the rounds on the Sunday news shows, Kellyanne Conway said she has concerns about Mitt Romney as secretary of state, but added that if that’s who President-elect Trump chooses, she will support his decision “1,000 percent.”

“I’m a concerned citizen,” she told NBC’s Chuck Todd when asked if she was “campaigning against Mitt Romney as secretary of state.”

Conway assured Todd she was not “campaigning” against the former GOP nominee and wasn’t trying to “make the news.”

“People feel betrayed to think that Gov. Romney, who went out of his way to question the character and the intellect and the integrity of Donald Trump now our president-elect would be given the most significant cabinet post of all,” she said. “That’s a decision that one man can make, President-Elect Trump. I will respect it. And I will support it 1,000%. But I’m reflecting what the grassroots are saying. They feel — they feel a bit betrayed to think you can get a Romney back in there after everything he did. We don’t know if he voted for Donald Trump. He and his consultants were nothing but awful to Donald Trump for a year."

Conway later said on CNN’s “State of the Union” that she’s a big proponent of party unity but that doesn’t mean “we have to pay for that with the secretary of state position.”