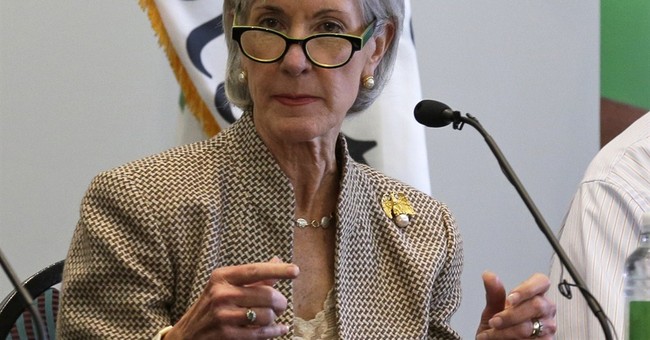 First, this video montage of HHS Secretary Kathleen Sebelius assuring the American public and Congress that Obamacare will be ready (read: working) on October 1:

With so much to say about the new healthcare law before the exchanges opened, Sebelius has been conspicuously silent since October 1. Of course, the new health care law’s roll-out has been a complete failure so it’s not surprising. Some members of Congress have even called for Sebelius to resign over it for “gross incompetence.” Others are, at the very least, demanding answers:

Leaders of the chamber’s Energy and Commerce Committee are pressing for public answers after the Obama administration and companies involved in the site's development and launch said the online health care exchange was “on track” for the October 1. start. […]

Committee Chairman Fred Upton began focusing on Secretary Sebelius after she went to Comedy Central’s “The Daily Show with Jon Stewart” last week to talk about the website.

“Secretary Sebelius had time for Jon Stewart, and we expect her to have time for Congress,” the Michigan Republican has repeatedly said.

The committee is scheduled to hold a hearing Thursday that will focus on whether officials involved with the site “Didn't Know or Didn't Disclose” problems. And the committee has for the third time in the past two days publicly called upon the administration to send witnesses to Capitol Hill to provide answers.

The requests, which have so far been rejected, include a letter Thursday directly to Secretary Sebelius. […]

"It's well past time for the administration to be straight and transparent with the American people,” Upton said recently. “Top administration officials repeatedly testified everything was on track, but the broad technological failures reveal that was not the case… The president and top officials were quick to boast the number of visitors to HealthCare.gov, but they have since gone silent.”

Sebelius, as it turns out, has time to attend the inaugural Kennedy forum gala in Boston on Wednesday night, but won’t be available to answers questions at the congressional hearing the next day. Imagine that.