Hungarian Official Defends the Country's Stance on Immigration, Says Upcoming Elections Will Be a 'Decisive Moment' in EU History 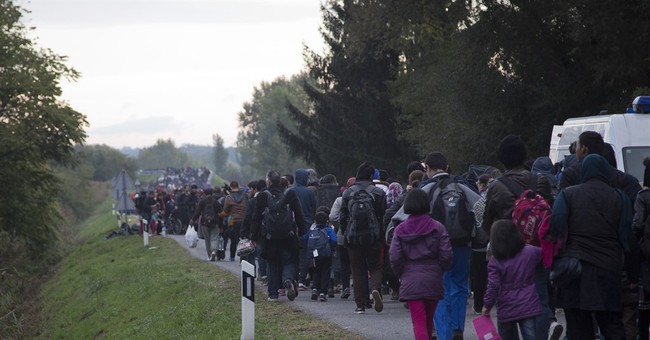 Washington, D.C. – Levente Magyar, Deputy Minister for Foreign Affairs and Trade for Hungary, spoke with Townhall Tuesday about his country’s stance on immigration, the decisive moment Europe is facing on the issue, and the country’s new trade office in Jerusalem.

Magyar commented on the country’s €30 million in aid to Morocco to help control migration and the philosophy that was behind that funding.

“This specific program that we will have with Morocco and other similar programs that we have with different partners in Africa and the Middle East can all be traced back to our position, fundamental opinion about migration,” Magyar said, “which is that migration is not something positive and desirable, it’s something that should be avoided.”

He emphasized that “the way to avoid masses of people setting out on dangerous journeys to have a better life in other countries is by improving the living standard of the source countries.”

Hungary, he explained, is attempting to do this by “teaming up with some other like-minded countries” and “enhancing economic capacities and, on the other hand, by cooperating in border control, contributing to the capacity building of the local defense forces.”

Hungary has partnered with the Visegrád Four on the issue, which consists of Poland, the Czech Republic, and Slovakia.

“We are of the opinion that it is a fundamental, legitimate right of a country to defend itself and to decide who gets to enter the country or not,” Magyar emphasized. “This in no regard is contrary to our humanitarian obligations that we try to live up to.”

The country’s stance on immigration has not made it popular, and Magyar commented on the friction Hungary is experiencing from other countries in the European Union as key European Parliamentary elections loom.

He accused some within the EU of “trying to impose political policies on the different nation states that they would have no business in doing, for example, imposing mandatory quotas, among others, on Hungary to take a defined number of migrants every year with an indefinite outlook.”

“That is something that we just cannot accept, not only because it is illegal by virtue of the treaties but because we see it as a breaching of our sovereignty,” he explained. "Whatever criticism or whatever comments we make to that end, it’s not about being unhappy with our EU membership, it’s the opposite. We are so concerned about the future of the European Union that we are not hesitant to come up with these views that put us at odds with a lot of these aforementioned organizations and a lot of governments of member states.”

Magyar said that ultimately the people will face a crucial decision about the future of Europe in the upcoming European Parliamentary elections in May.

“We will see what the people want because after five turbulent years that saw Brexit occur, that saw the migration crisis play out, we will have European elections and the people will make it very clear what they’re expecting from their leaders,” he said.

Magyar said “it will be a decisive moment in the European Union’s history.”

“I would even go so far as saying that there have never been such important European Parliamentary elections as now because the stakes are very definable whereas beforehand they were more abstract,” he added.

“It’s clear to everyone that these elections are about migration, are about identity, and the very heart of the issues pertaining to the future of Europe,” he emphasized.

Magyar also commented on the country’s new trade office in Jerusalem, the first European diplomatic mission there in decades.

“We see Israel as a bulwark of stability in a fragile Middle East environment, and we fully acknowledge the Jewish state’s right to defend itself and to have the right for full self-determination,” he said.

Magyar added Israel is “an extremely important economic partner for Hungary” as one of its biggest foreign investors and “this is the reason why we decided to open a trade representation in the capital of Israel which will also serve as a consular office as an affiliate of our embassy in Tel Aviv.”

“We haven’t moved the embassy, we just created an office,” he clarified, “but it’s only the third official diplomatic representation in Jerusalem after the United States and Guatemala moved their embassies so it’s significant in that sense.”

Magyar also said that U.S. relations with Hungary are very strong under the current administration. He praised the “fruitful and productive political dialogue” that has been “restored” with the Trump administration, saying it is “producing its first tangible results.”