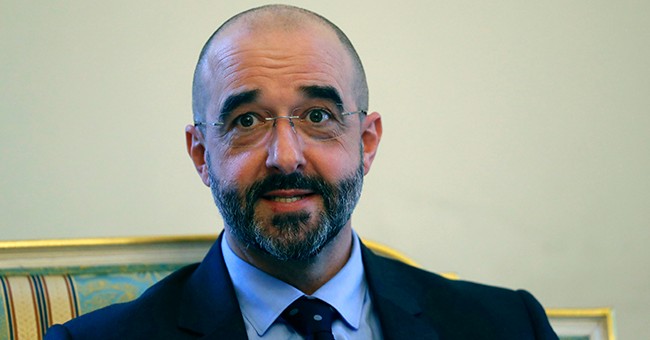 When the country was overwhelmed by illegal immigrants in 2015, they built a fence along their border with Serbia that Kovács said is very effective.

“Since we’ve built the double fence system at the Hungarian border with Serbia at that border section we were able to reduce the number of illegal migrants to zero, basically zero,” he said. “The fence itself is just obviously one element of the solution because you have to man the fence and that means you need personnel on the ground and also the legal environment is very important so, as we usually maintain, it’s a threefold security measure we have at the spot and indeed it works.”

“We were not able to stop them because there was no fence and we were not much prepared as neither was Europe prepared actually for that and since then for the past almost four years by now we’ve been preparing ourselves in all respects,” he continued.

“We all fulfill our international duties,” he emphasized, “but fighting illegal migration is basically not possible without physical infrastructure and that is physical barriers at the borders today.”

Regarding the debate in the U.S. over a border wall, Kovács said Hungary tries to avoid “the domestic political debates of other countries and we most of the time abstain from giving advice but we can share our experience.”

Hungary’s border wall and stance on immigration has made it the target of frequent criticism among the countries in the European Union.

Kovács called the hostility against barriers at a country’s borders “a sign of weakness.”

“Again we and recently Italy have demonstrated that defending the border is a matter of decision so it’s not a matter of capabilities,” he added. “Europe is strong, Europe is powerful if there’s a political will to defend the borders it is possible on the ground and also on the seas.”

While Hungary has a tough stance on immigration, Kovács also discussed a foreign aid initiative in which the country has achieved real results for Christians in the Middle East.

“Our foundation Hungary Helps, which comes as an innovation, is intended to work in an effective and efficient manner,” he said, explaining that the organization delivers “help on the spot immediately and directly."

He said the group works in Syria and Iraq to deliver help to the local religious communities and municipalities "by financing hospitals, rebuilding churches and building schools.”

He explained that the primary means of helping these communities is by rebuilding to help them remain in the region “especially with regard to Christian communities but also incorporating and involving everybody who lives in the vicinity of these communities.”

According to the latest World Watch List, by Open Doors USA, a nonprofit group which serves persecuted Christians in more than 60 countries, 245 million Christians face high levels of persecution worldwide.

“Christian communities have been living in these areas especially in the near east for not only centuries but basically thousands of years,” he added, “therefore their existence, the fact that they remain where they are is assuring that history continues according to the organic version of it and not according to those who would like to annihilate these communities and wipe out entire communities in areas like these.”

The United States Agency for International Development (USAID) signed a Memorandum of Understanding (MOU) with Hungary on this issue in December to “increase coordination to help communities in the Middle East recover from genocide and persecution by the Islamic State of Iraq and Syria (ISIS).”

The visit was the first one by a U.S. Secretary of State to the country since 2011 and Kovács believes it marks “the beginning of a new era.”