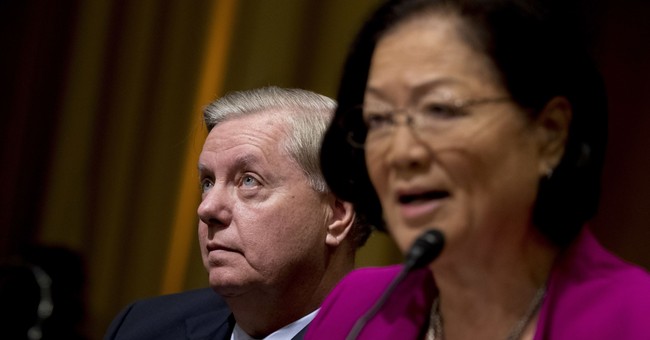 “It is the richest of ironies that the majority leader has taken to calling those opposed to the confirmation of Brett Kavanaugh a mob when several nights a month the president whips his supporters into a frenzy to attack his target of choice,” she said in a Senate Judiciary Committee meeting.

Hirono then issued a somewhat ominous message to McConnell, warning him that he was “dangerously underestimating" what Kavanaugh's confirmation had "awakened."

“To characterize the women who identified with Dr. Ford, who demonstrated and marched here to Washington from around the country to demand the Senate not confirm a man credibly accused of sexual assault as a ‘mob’ dangerously underestimates what this confirmation process awakened,” she said.

“Women are tired of being dismissed and disbelieved and if you want to be responsive to the American people we would all be wise to listen to them with respect,” Hirono concluded.

In his floor speech on Tuesday, McConnell referred to the “unhinged tactics” of leftist protestors which included chasing GOP senators out of restaurants and in airports, screaming at them in the halls and floor of the Senate, and even banging and clawing at the doors of the Supreme Court.

“The far-left mob is not letting up,” he said Tuesday. “Earlier today former Secretary of State Clinton sent this signal as clear as today. This is Secretary Clinton. She told CNN exactly how she views millions of Americans who hold different political views from her own.”

“Here’s what she said: ‘You cannot be civil with a political party that wants to destroy what you stand for. If we’re fortunate enough to win back the House and/or the Senate, that’s when civility can start again,’” he continued, simply quoting Clinton’s remarks.

While she would like McConnell to condemn the word “mob,” Sen. Hirono has refused to condemn protestors targeting the GOP in restaurants and at their homes.

"It is one thing to protest at the Supreme Court,” CNN’s Dana Bash told Hirono, “it's another thing to run senators out of restaurants, go to their homes. Is that going too far?"

"I think that it just means that there are a lot of people who are very, very much motivated by what is going on,” Hirono replied, “because what happened with Judge Kavanaugh is from the very beginning, this was not a fair process."

"Well, this is what happens, you know, because when you look at white supremacists and all of that, this is what is coming forth in our country," she added. "There is a tremendous divisiveness in our country, but this is the kind of activism that occurs, and people make their own decisions. If they violate the law, then they have to account for that."

Sen. Hirono is not the only one who has developed sudden scruples over the use of the word "mob" to describe the extreme leftist protestors. CNN hosts Brooke Baldwin and Don Lemon have both chastised CNN panelists for using the term, claiming that it is being weaponized by the right.

Free Beacon's Andrew Kugle compiled clips of the behavior of leftist protestors with clips of the CNN hosts condemning the term mob:

SUPERcut of reporters telling people to not use the "mob" word cut with video of the mob. pic.twitter.com/o2tgNZMEv5