McConnell Lays Down the Law on Protestors Targeting Senate GOP: 'We Will Not Be Intimidated' 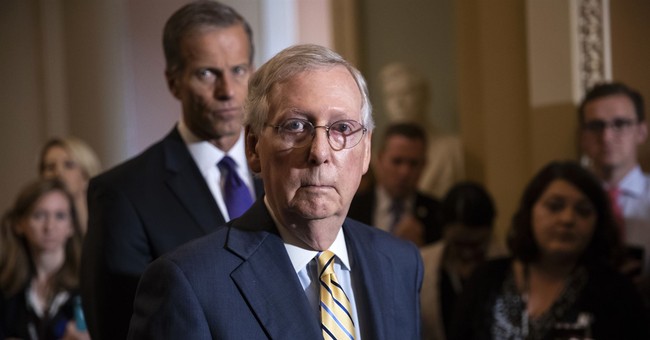 Senate Majority Leader Mitch McConnell emphasized Wednesday that the Senate GOP will not be intimidated by the leftist protestors who have been harassing them on Capitol Hill and even in airports and restaurants.

“I’m not suggesting we’re the victims here,” McConnell said on the Senate floor, “but I want to make it clear to these people who are chasing my members around the hall here or harassing them at the airports or going to their homes: we will not be intimidated by these people.”

“There is no chance in the world they’re going to scare us out of doing our duty,” he said. “I don’t care how many members they chase, how many people they harass here in the halls. I want to make one thing perfectly clear, we will not be intimidated by these people.”

.@senatemajldr on people protesting GOP Senate members: “There is no chance in the world they’re going to scare us out of doing our duty.” pic.twitter.com/aGcjj044CJ

Republican senators, particularly key moderate senators, have faced intense scrutiny as the vote to confirm President Trump’s Supreme Court nominee Judge Brett Kavanaugh looms at the end of the week, following an FBI probe into sexual misconduct allegations against him.

Sen. Ted Cruz was recently chased out of a D.C. restaurant over his past friendship with Kavanaugh. His office was also targeted with a white, powdery substance.

McConnell was confronted by protesters at a Washington airport Monday and was repeatedly asked if he believed the sexual assault allegations against Kavanaugh.

Protestors have been emboldened to confront GOP senators particularly after two women confronted Sen. Jeff Flake (R-AZ) in an elevator and were partially credited for his decision to side with Democrats in demanding the FBI investigation prior to a full Senate vote.