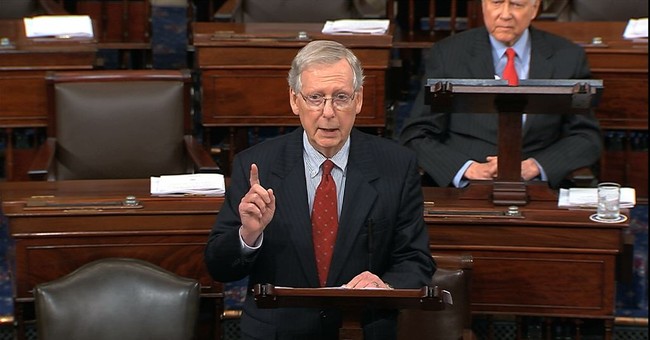 “The far-left mob is not letting up,” he said on the floor of the Senate. “Earlier today former Secretary of State Clinton sent this signal as clear as today. This is Secretary Clinton. She told CNN exactly how she views millions of Americans who hold different political views from her own.”

“Here’s what she said: ‘You cannot be civil with a political party that wants to destroy what you stand for. If we’re fortunate enough to win back the House and/or the Senate, that’s when civility can start again,’” McConnell said, quoting a portion of Clinton’s remarks.

McConnell condemned the remarks, emphasizing that the Senate will not be intimidated.

“No peace until they get their way?” he asked. “More of these unhinged tactics? Apparently this is the left’s rallying cry. But fortunately the American people know that the fact-free politics of hate, fear, and intimidation are not how we actually govern in our democratic republic. The Senate and the nation will not be intimidated.”

“But the madness hasn’t stopped,” he said. “They are already signaling that even more drastic steps may be necessary now that Justice Kavanaugh is on the court.”

"One far-left pressure group is already trying to circulate petitions that Justice Kavanaugh should be impeached,” he pointed out.

During Kavanaugh’s confirmation process, GOP senators faced constant harassment from protesters, including at their homes and when they were dining out.

Sen. Ted Cruz (R-TX) was chased out of a restaurant by protestors over his support of Kavanaugh. Sen. Susan Collins (R-ME), a key vote in the process, faced ugly threats over her decision.

Another Democrat joined Hillary in defending an abandonment of civility in the tactics of leftist groups.

Sen. Mazie Hirono (D-HI) told CNN Sunday that the protestors were just “very motivated,” saying that "this is what happens."