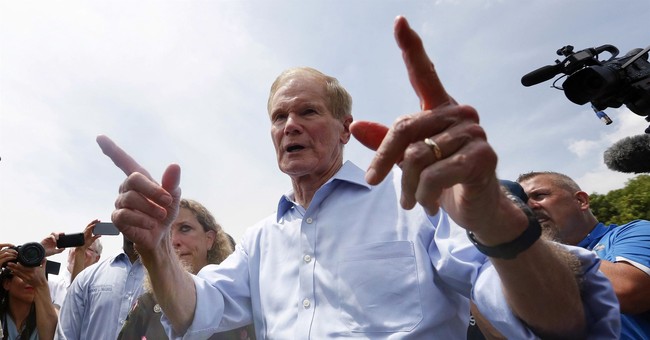 Sen. Bill Nelson (D-FL), a vulnerable incumbent who is facing a tough challenge from Republican Gov. Rick Scott in a state won by Trump, said Monday that he expects to oppose the nominee President Trump chooses for the Supreme Court due to concerns over protecting abortion access.

"Obviously I have to wait and see who the nominee is, but if, as President Trump has suggested, he's going to have a litmus test — and he said this over and over — on Roe V. Wade, then I'm not going to be voting for some justice who's going to overturn Roe v. Wade," Nelson said following a news conference.

The Tampa Bay Times noted that “among the 10 Democratic senators running for reelection in states won by Trump in 2016, Nelson is the first to voice his likely opposition.”

Nelson has other troubles plaguing his bid for re-election. One October poll found that only 49 percent of Florida voters even know who Nelson is.

Politico noted that Gov. Scott has a huge outreach to the Hispanic community and is advertising in Spanish, something Nelson isn’t doing.

Abortion advocacy groups were big fans of Nelson’s statement today, however, praising him for his “leadership” on the abortion issue.

Yes!!!! This is the kind of leadership we need. Thank you @SenBillNelson for taking Trump at his word that he will gut #RoevWade with this #SCOTUS nom. https://t.co/uIc6YORaeW

Bill Nelson claims to be independent, but then he admits he expects to vote against the Supreme Court nominee before even knowing their name. Only a career politician wouldn’t recognize such blatant party line politics.