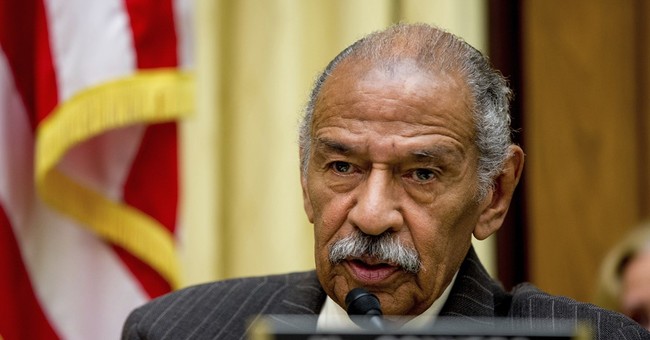 Rep. Gregory Meeks (D-NY) told CNN Wednesday that his colleague Rep. John Conyers (D-MI) should step down from his post as ranking member of the House Judiciary Committee in light of a Buzzfeed report that his office paid more than $27,000 in 2015 to settle a complaint of sexual harassment. A second woman also accused Conyers of unwanted sexual advances in 2015 and 2016.

"No one is exempt from bad behavior, and I think that he's agreed and I clearly see where Leader Pelosi has said that there will be an immediate ethics committee review," Meeks said. "I really think that probably the appropriate thing right now is that he should step down as the ranking member of the Judiciary Committee and be subject to this ethics investigation so it can be determined whether or not there is a practice or pattern, and then appropriate consideration should be made at that time as soon as the ethics committee finishes its review.”

Rep. Gregory Meeks: Conyers "should step down as the ranking member of the Judiciary Committee and be subject to this ethics investigation" https://t.co/gOCW2HXH4S

“What’s going on exposes not just in Capitol Hill but America a sickness that I think that we have in this country and so this dialogue, this conversation is good,” Meeks added.

“He should step down as the ranking member with the opportunity If he defends himself and says and shows there is nothing there, then he could come back," Meeks concluded.

Conyers admitted to the settlement earlier this week but said that his office "resolved the allegations – with an express denial of liability – in order to save all involved from the rigors of protracted litigation."

He says he is "expressly and vehemently" denying any wrongdoing.

Attention has been called in recent weeks to sexual harassment problems on Capitol Hill. Sen. Al Franken (D-MN) is facing allegations of groping and forcibly kissing women, one of whom released photographic evidence of him groping her while she slept. A recent Congressional hearing called attention to the convoluted process staffers must go through to report harassment.

Share this on Facebook
Tweet
Even Tony Blinken Knows Court Packing Is 'Anti-Democratic'
Spencer Brown
Want to Guess the Detail the Media Will Probably Leave Out of Horrific Philly Train Rape Story
Matt Vespa
Sinema's Latest Red Line on Spending Plan Leaves Dems Scrambling to Figure Out How to Pay For It
Leah Barkoukis
Gaetz on Death Threat Against Him: If They're Successful, I Want It Known 'Who Stopped Their Arrest'
Leah Barkoukis