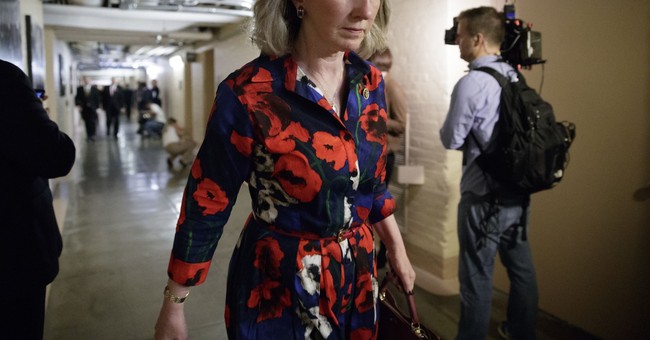 Rep. Barbara Comstock (R-VA) told a disturbing tale Tuesday of a current member of Congress allegedly exposing himself to a staffer. Comstock went on to highlight the woeful inadequacy of the current method of handling such incidents on Capitol Hill.

"I wanted to close with something that I just had somebody tell me recently. This is about a member who is here now. I don't know who it is, but somebody who I trust told me this situation," Comstock said.

"This member asked a staffer to bring them over some materials to their residence and the young staffer, it was a woman. This younger staffer went there and was greeted with a member in a towel. It was a male who then invited her in. At that point, he decided to expose himself. She left and then she quit her job," Comstock told the committee.

“But that kind of situation, what are we doing right now who are dealing with something like that?” Comstock asked and emphasized. “I think it’s important we name names."

"I think we need to have more training, know about the violence that we're seeing in some of these situations that are criminal," she added. "I would argue that probably is a crime in that situation."

Later on in the House administration hearing on preventing sexual harassment, Comstock called for “a much better process so that person doesn’t have to give up her career.”

“Is there anybody identifying when something clearly is a crime?” she asked Gloria Lett, the counsel for the Office of House Employment Counsel.

Lett replied that she was not aware of anybody in that position.

“I think that may be something, Mr. Chairman, that we really need to look at,” Comstock said.

The hearing called attention to the incredibly convoluted process a staffer must undergo to report an incident to the congressional Office of Compliance. The victim must go through mandatory counseling for 30 days and the accused receives free legal counsel through Congress, while the victim is on his or her own.

Listening to the House Administration Committee hearing on preventing sexual harassment in Congress. Flowchart presented by @RepSpeier demonstrates the process staffers/lawmakers have to go through if they bring forward a claim of sexual harassment. https://t.co/G3nLU9rjnR pic.twitter.com/j00CikZear

House Speaker Paul Ryan released a statement following the hearing announcing that “the House will adopt a policy of mandatory anti-harassment and anti-discrimination training for all Members and staff.”

“Our goal is not only to raise awareness, but also make abundantly clear that harassment in any form has no place in this institution,” he emphasized. “As we work with the Administration, Ethics, and Rules committees to implement mandatory training, we will continue our review to make sure the right policies and resources are in place to prevent and report harassment.”