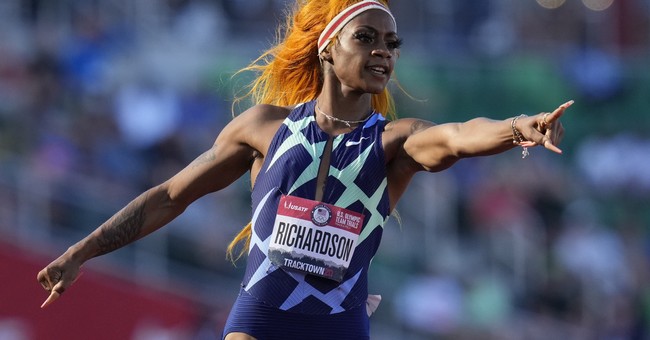 The World Anti-Doping Agency responded to the letter from Reps. Alexandria Ocasio-Cortez (D-N.Y.) and Jamie Raskin (D-Md.) that asserted that the suspension of sprinter Sha’Carri Richardson from the Olympics for a positive marijuana test was racist and not based on science, with the agency saying that these claims lack merit.

"The Prohibited List has no impact on whether an athlete chooses to use cannabis at any other time of the year for recreational or other purposes," WADA told the lawmakers in a letter.

The agency said that athletes are only prohibited from marijuana use "in-competition," which begins at 11:59 pm the day before a scheduled contest and ends after the conclusion of the competition and sample collection process related to the event.

"The decision limit for triggering a positive test for cannabis is 180ng/mL," WADA said. "According to the current science, an athlete who occasionally uses cannabis, even days before a competition, would be extremely unlikely to test positive with this decision limit. Thus, athletes’ civil liberties are not burdened by cannabinoids being included on the Prohibited List for in-competition testing only."

The Prohibited List is made with guidance from international experts in science and medicine, and with input from athletes and other stakeholders. As the letter reads, WADA aims for the Prohibited List to mirror current medical and scientific evidence.

WADA also pointed out that America, where cannabis is still federally illegal, has never objected to the Prohibited List's inclusion of the substance. The letter said that the U.S. and the United States Anti-Doping Agency have been among the "most vocal and strong advocates for including cannabinoids on the Prohibited List."

The international agency highlighted to the Democratic lawmakers that there are more U.S. representatives "advising WADA on these scientific issues" than any other country.

The organization shifted the blame for Richardson's suspension to the USADA, who, as Townhall previously reported, told the two lawmakers that they are required to enforce the anti-drug rules set by WADA.

"The testing of Ms. Richardson and her resulting suspension were administered and adjudicated by the USADA," WADA's letter read. "WADA is not a party to that particular matter and therefore simply is not in a position to vacate the results of Ms. Richardon’s test in Oregon."

Ocasio-Cortez and Raskin sent a letter to WADA and USADA earlier this month requesting that the agencies reconsider the suspension of Richardson over her positive test for THC, a component of marijuana.

WADA's letter comes after Richardson accepted a 30-day suspension from the USADA for a positive marijuana test following her win in the 100-meter at the Olympic trials last month. Her results at the trials were disqualified and she will miss out on the competition in the Tokyo Olympics, which begin prior to the end of her suspension.

Her suspension expires ahead of the 4x100-meter relay on Aug. 6, but USA Track and Field left her off the team, meaning Richardson will not participate in any Olympic events this summer.

Richardson previously said she is taking "responsibility for my actions," when explaining that marijuana was used to deal with the death of her mother.