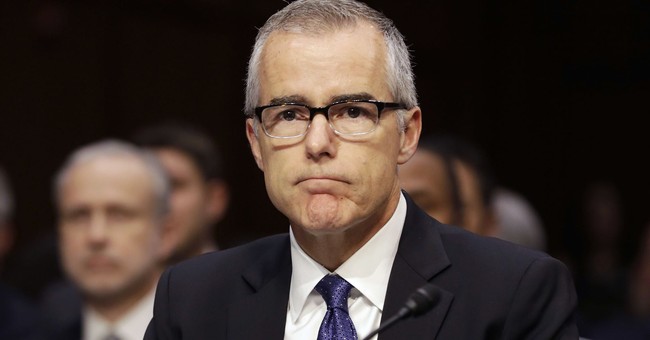 Some news: CNN announces Andrew McCabe has been signed as a contributor.

Yes, it's that Andrew McCabe. He's the former official who lied multiple times under oath and to FBI agents, prompting the Department of Justice Inspector General to refer him for criminal prosecution. He was fired. A reminder of what the IG found:

Just yesterday CNN's media "reporters" were arguing against the hiring of former White House Press Secretaries Sarah Huckabee Sanders and Sean Spicer. Spicer was announced as a new cast member on ABC's "Dancing With the Stars." Sanders has joined Fox News as a contributor.

Wrote this about Spicer and ABC last night, now it applies to Sanders and Fox too: How should ex-White House officials be treated when they spend months misleading the public, then seek positions of fame and privilege?

.@brianstelter: Spicer and Sanders new TV jobs "deserve outrage and backlash" because "this administration lies consistently, whether it's Sanders or Spicer or other White House aides."https://t.co/9ml69AKHVC pic.twitter.com/1Zuf5LrliE

Here are some of the responses to CNN's decision:

McCabe was fired for repeatedly lying to federal investigators under penalty of perjury & referred for prosecution by the IG.

Let’s call an ?? an ??: CNN hired an established liar because he hates Trump. The high horse has been put out to pasture. https://t.co/9z1UcIatom

“We interrupt our sanctimonious high dudgeon about Spicer dancing & Sarah getting a TV gig to bring you the following news about a powerful govt official recently terminated for repeatedly lying under oath...

...now back to your regularly-scheduled lectures about Truth & Norms.”

Andrew McCabe, one of the central figures of the “Russia collusion” hoax, who was fired from the FBI for lying about his leaks to the media, has been hired by CNN, one of the media outlets that did the most to perpetuate the damaging hoax. pic.twitter.com/lvfPRCk4tb

Andrew McCabe was fired by the FBI for leaking to the media and lying to the FBI about it.

I guess crime does pay. https://t.co/sobQ4CQWgw

Lmao the infants who pitched a multi-day fit over Sean Spicer going on a dancing show hired McCabe pic.twitter.com/NG6KnDekLx

11 seconds after complaining about the “revolving door” between the Trump admin and Fox News, CNN brings on (disgraced) former spook McCabe.

Here are some more former spooks working for CNN now:

YESTERDAY: Stelter and Darcy report outrage for Spicer dancing on an entertainment show because he has no credibility.