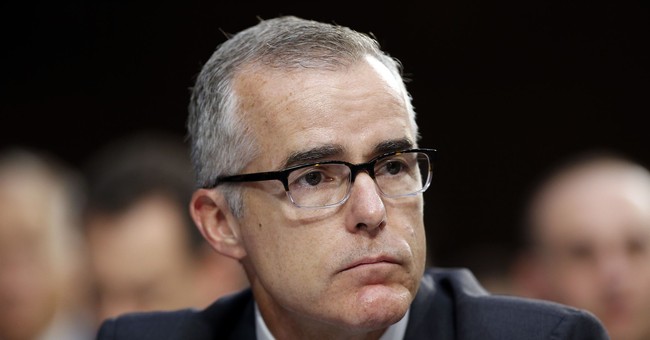 The 35-page report goes through McCabe's lies in detail. Here is a summary:

Lastly, we determined that as Deputy Director, McCabe was authorized to disclose the existence of the CF Investigation publicly if such a disclosure fell within the “public interest” exception in applicable FBI and DOJ policies generally prohibiting such a disclosure of an ongoing investigation.  However, we concluded that McCabe’s decision to confirm the existence of the CF Investigation through an anonymously sourced quote, recounting the content of a phone call with a senior Department official in a manner designed to advance his personal interests at the expense of Department leadership, was clearly not within the public interest exception.  We therefore concluded that McCabe’s disclosure of the existence of an ongoing investigation in this manner violated the FBI’s and the Department’s media policy and constituted misconduct.

McCabe was fired by Attorney General Jeff Sessions last month after the FBI Office of Professional Responsibility and inspector general recommended he be terminated from his position for a lack of candor. After his firing, which put his government pension in jeopardy, McCabe hired a D.C. lobbying firm to set up a legal defense fund. He quickly raked in more $500,000 and the page was promoted by Democrats.

"Today's Inspector General report confirms FBI Deputy Director McCabe's firing was justified. The second in command at our nation's premiere law enforcement agency should be the epitome of fidelity, bravery and integrity. The Inspector General found not only did McCabe divulge sensitive information, he did it without the permission, authority, or knowledge of his supervisor. The report also found a lack of candor both while under oath and while not under oath, and a failure to remedy his lack of candor despite multiple opportunities," Gowdy said.

"This report continues to call into question decisions made by FBI leadership in 2016 and 2017, which is why the Oversight and Judiciary Committees will continue our joint investigation into the matter," he continued. "I remain fully confident in the professionalism, thoroughness and fact centricity of Inspector General Horowitz, and look forward to reviewing the Inspector General's full report in May."