Hillary Has Nobody To Blame But Herself 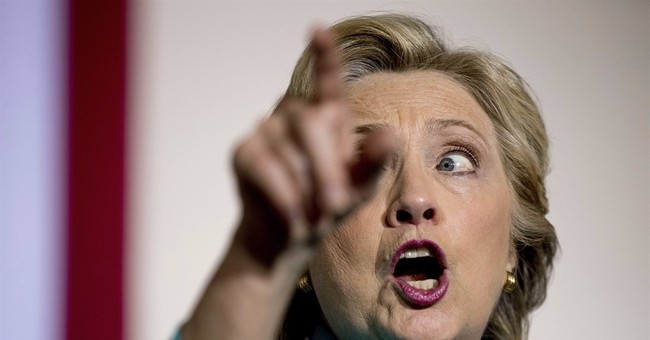 It's been three days since FBI Director James Comey sent a letter to Congress saying he was reopening the investigation into former Secretary of State Hillary Clinton's private, unsecured email arrangement. Comey made the announcement after new information relevant to the case, reportedly thousands of emails, were found on a computer belonging to former Congressman Anthony Weiner and his ex-wife Huma Abedin, who serves as a top aide for Clinton.

In pure Clintonian fashion, Clinton herself wasted no time going after Comey by accusing him of purposely trying to influence an election. In an effort to paint Comey's move as purely political, she lied about the letter he sent by saying it was only sent to Republicans. Campaign Chairman John Podesta did the same despite the letter being sent to Democrats and Republicans.

Over the weekend Clinton surrogates, allies and supporters took the airwaves to demand full transparency from the FBI while calling for the release of any and all new information. They've also slammed Comey for allegedly breaking Justice Department protocol by informing Congress the investigation is back open. Democrats who praised Comey for his decision not to indict Clinton in July, have now turned on him with full venom. Former Majority Leader Harry Reid has gone so far as accusing him of breaking federal law for following through on a promise made under oath during congressional testimony about the Clinton probe. Comey said in September if new and relevant information about the case were found, he would look into it. Here we are.


These demands, attacks and accusations against Comey over protocol and transparency are quite rich considering the reason Clinton is in this situation at all is because of her opacity not only with the American people, but with the FBI.

Huma Abedin, who has been by loyally Clinton's side for years, has been absent from the campaign trail since Friday. Anthony Weiner, under his own FBI investigation for allegedly sexting a 15-year-old girl, is cooperating with the FBI's reopening of the Clinton case. Abedin and Weiner been cited by some Clinton supporters as the problem, when only Hillary is truly to blame.

Which brings us to the most important point about the situation Hillary Clinton finds herself in 8 days away from the election: She did this to herself.

Clinton was the First Lady, a Senator from New York who sat on the Intelligence Committee and Secretary of State. She knew what the rules were and ignored them for the sake of secrecy and non-transparency. She did it to avoid oversight from Congress, which she admitted in emails. She prioritized her secrecy and criminal behavior above the national security of the United States, which is why she's in the situation she is today.

Without her private server there would be no FBI investigation. Period. If it costs her the election, it's her fault. Hillary has nobody to blame but herself.