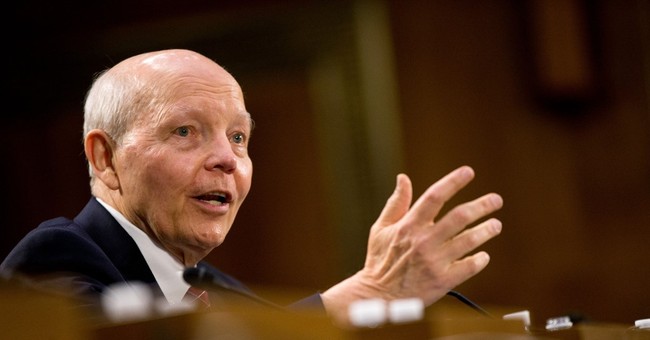 Yesterday Republican members of the House Oversight Committee introduced a resolution to impeach IRS Commissioner John Koskinen for a variety of offenses.

Moments ago we filed papers to impeach IRS Commissioner Koskinan. Destruction of evidence & false statements under oath among the charges.

You can read the details of the impeachment resolution and the charges against Koskinen here. Also keep in mind that earlier this year a federal judge threatened to "haul into court the IRS Commissioner to hold him personally in contempt" for failing to comply with court mandated document requests surrounding the IRS targeting of conservatives under former IRS official Lois Lerner.

“Calling this resolution a ‘stunt’ or a ‘joke’ would be insulting to stunts and jokes,” Rep. Elijah E. Cummings (Md.) the committee’s top Democrat, said in a statement. He said the impeachment resolution was “ridiculous” and a waste of taxpayer money.

It is important to keep in mind that Cummings himself is embroiled in controversy and alleged unethical behavior surrounding the IRS targeting scandal. In fact, previous reporting shows not only did he try to obstruct the investigation into the IRS for targeting conservatives, his office took part in the targeting.

Emails show Lois Lerner fed information about the non-profit voting rights organization True The Vote, which was targeted by the agency, to Cummings. Cummings had repeatedly inquired about the group to the IRS due to his opposition to their position on voter identification laws. At the same time, Cummings denied to the Oversight Committee majority that he or his staff had ever contacted or communicated with the IRS about True The Vote. From my previous reporting:


As a result of Cummings' behavior, True The Vote filed an ethics complaint against him.

The House will vote on the impeachment resolution for Koskinen in the coming days.