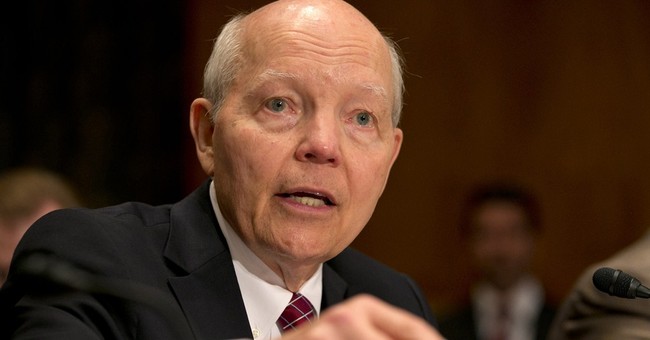 In the resolution, which was introduced late Tuesday by House Oversight Committee Chairman Jason Chaffetz and 18 other Republican Committee members, Koskinen is being accused of failing to provide evidence in response to subpoena over the targeting scandal, violating the public trust and of lying under oath. From the resolution:

-Failed to comply with a subpoena resulting in destruction of key evidence. Commissioner Koskinen failed to locate and preserve IRS records in accordance with a congressional subpoena and an internal preservation order. The IRS erased 422 backup tapes containing as many as 24,000 of Lois Lerner’s emails – key pieces of evidence that were destroyed on Koskinen’s watch.
-Failed to testify truthfully and provided false and misleading information. Commissioner Koskinen testified the IRS turned over all emails relevant to the congressional investigation, including all of Ms. Lerner’s emails. When the agency determined Ms. Lerner’s emails were missing, Commissioner Koskinen testified the emails were unrecoverable. These statements were false.
-Failed to notify Congress that key evidence was missing. The IRS knew Lois Lerner’s emails were missing in February 2014. In fact, they were not missing; the IRS destroyed the emails on March 4, 2014. The IRS did not notify Congress the emails were missing until June 2014 – four months later, and well after the White House and the Treasury Department were notified.


Koskinen testified about the IRS targeting scandal today in front of the Senate Finance Committee.

In July, a federal judge threatened to "haul into court the IRS Commissioner to hold him personally in contempt" after failing to provide court mandated documents surrounding the targeting case.

IRS Commissioner John Koskinen has been stonewalling Congress and the courts for more than a year over Lois Lerner's "missing" emails. He's also ignored court orders to produce documentation and now, U.S. District Court Judge Emmet Sullivan has had enough.

During a hearing yesterday surrounding a Freedom of Information Act lawsuit filed by Judicial Watch, Sullivan said he "will haul into court the IRS Commissioner to hold him personally into contempt" after the IRS failed to turn over ordered documentation to the Court. The information ordered included status reports and recovered emails belonging to former IRS official Lois Lerner. Sullivan also noted Department of Justice of attorneys are in the same position for failing to turn over ordered documentation.

Rumors the Oversight Committee would pursue impeachment charges against Koskinen have been swirling for some time.