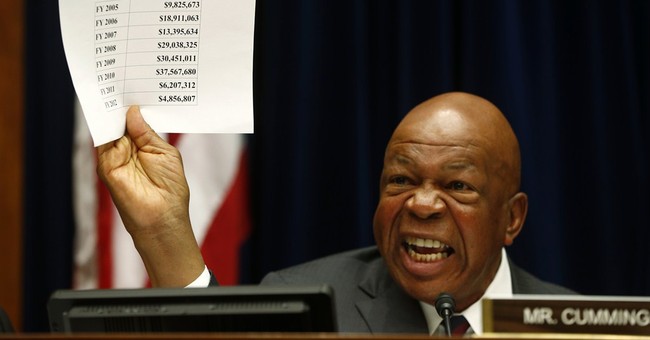 The first contact between the IRS and Cummings' staffers about True the Vote happened in August 2012. In January 2013, staff asked for more information from the IRS about the group. Former head of tax exempt groups at the IRS Lois Lerner went out of her way to try and get information to Cummings' office.The information Cummings received was not shared with Majority Members on the Committee.

On January 28, three days after staffers requested more information, Lerner wrote an email to her deputy Holly Paz, who has since been put on administrative leave, asking, “Did we find anything?” Paz responded immediately by saying information had not been found yet, to which Lerner replied, “Thanks, check tomorrow please.”

Up until this point, Rep. Cummings has denied his staff ever contacted the IRS about True the Vote and their activities during Oversight hearings. In fact, on February 6, 2014 during a Subcommittee hearing where Engelbrecht testified, Cummings vehemently denied having any contact or coordination in targeting True the Vote when attorney Cleta Mitchell, who is representing the group, indicated staff on the Committee had been involved in communication with the IRS. This was the exchange:

Ms. Mitchell: We want to get to the bottom of how these coincidences happened, and we’re going to try to figure out whether any – if there was any staff of this committee that might have been involved in putting True the Vote on the radar screen of some of these Federal agencies. We don’t know that, but we – we’re going to do everything we can do to try to get to the bottom of how did this all happen.

Mr. Cummings. Will the gentleman yield?

Mr. Cummings. I want to thank the gentleman for his courtesy. What she just said is absolutely incorrect and not true.

After the hearing, Engelbrecht filed an ethics complaint against Cummings for his targeting and intimidation of her organization.

"These documents, indicating involvement of IRS officials at the center of the targeting scandal responding to your requests, raise serious questions about your actions and motivations for trying to bring this investigation to a premature end. If the Committee, as you publicly suggested in June 2013,'wrap[ped] this case up and moved on' at that time, the Committee may have never seen documents raising questions about your possible coordination with the IRS in communications that excluded the Committee Majority," the letter sent by Issa and the Chairmen further states. "As the Committee continues to investigate the IRS's wrongdoing and to gather all relevant testimonial and documentary evidence, the American people deserve to know the full truth. They deserve to know why the Ranking Member and Minority staff of the House Committee on Oversight and Government Reform surreptitiously contacted the IRS about an individual organization without informing the Majority Staff and even failed to disclose the contact after it became an issue during a subcommittee proceeding...We ask that you explain the full extent of you and your staff's communications with the IRS and why you chose to keep communications with the IRS from Majority Members and staff even after it became a subject of controversy."

The House Oversight Committee will vote tomorrow about whether to hold Lerner in contempt of Congress.