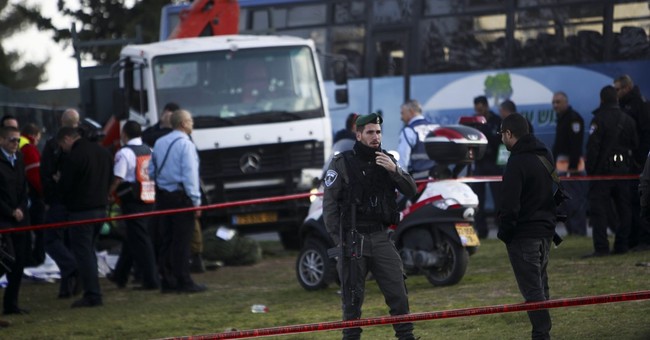 Yet again, an individual representing the Islamic State has rammed a vehicle into unsuspecting pedestrians in the name of Allah, this time in Israel.

A Palestinian man rammed his speeding truck into a group of Israeli soldiers in Jerusalem on Sunday, killing four people and wounding 15 others in one of the deadliest attacks in a year-long campaign of violence, Israeli police said.

Israeli Prime Minister Benjamin Netanyahu said the attacker "supported" ISIS and said there "definitely could be a connection" between Sunday's attack, which killed four Israeli soldiers, and recent attacks in France and Germany.

The attacker was shot dead by Israeli forces at the location overlooking the religious city.

The Islamic group known as Hamas praised the attack.  Spokesman Abdul-Latif Qanou called it a "heroic" act and encouraged other Palestinians to do the same.

Islamic radicals have now killed a total of 46 and injured 648 in vehicular attacks in Israel since 2015.