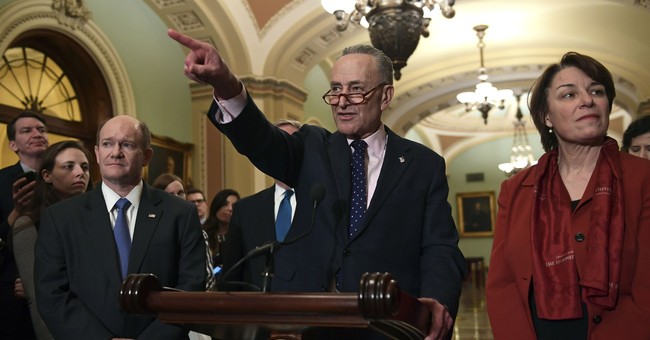 This political drama finally ended on Wednesday night, when Senate Majority Leader Chuck Schumer forced a vote on blowing up the Senate, knowing it would fail. And fail it did. Astoundingly, he wanted to put every senator on the record, including several who would have preferred to let this issue slide by, on the question of breaking the chamber's rules in order to re-write the nation's election laws – on a party-line vote, with zero Republican buy-in or input, allowing zero amendments to be introduced or debated on the Democrat-only scheme. Re-read that sentence. It's actually insane. And it was all done in the name of "democracy" and "voting rights." It went down 48-52, with just two Senate Democrats voting to maintain the filibuster, a minority rights tool employed hundreds of times by Senate Democrats in recent years; they even mounted one last week.

The fact that this extraordinary and short-sighted power grab failed is comforting. The margin, however, was not. The attempt, and the resulting relatively close shave, must not be forgotten. If Senate Democrats are able to build a larger majority by adding even just a handful of seats, they have made clear that their previous positions and impassioned speeches will mean absolutely nothing. The next time they believe they have the chance to empower themselves and advance their leftist agenda, they will detonate the nuclear option. Upcoming Senate elections, therefore, have incredibly high stakes. The Democratic Party has become the power-at-all-costs, ends-justify-the-means, anti-institutions party, and they must be treated as such. It's not just this episode. It's a long arc of unilateral, escalatory abuses.

Thankfully, the institution of the Senate, and its deliberative "cooling saucer" role, was saved this week. Every Republican defended the institution, but two people are primarily responsible for this sigh-of-relief outcome: West Virginia's Sen. Joe Manchin, and Arizona's Sen. Kyrsten Sinema. The latter stood up and loudly cast her "aye" vote to uphold the rules, defying her party's braying base and craven leadership. She has been hounded with bullying, harassment and threats for months – nevertheless, she persisted:

I'd like to think that her unbowed, uncowed, assertive announcement of her vote was shouted at the people who did things like chasing her into a bathroom stall and disrupting a wedding she attended. She made her position clear from the get-go, having campaigned as a moderate. Unlike other Democratic "moderates," she actually meant it. That's her sin here: Not lying to voters. As for Manchin, he was also keeping his word, having signed a "protect the filibuster" letter along with 29 other Democratic senators back in 2017, when Republicans were in control:

Here's the text of the letter to then-Majority Leader Mitch McConnell, which laid out an explicit commitment to what then-Minority Leader Chuck Schumer referred to as building a "firewall" around a vital "guard rail" of democracy – the legislative filibuster:

We are writing to urge you to support our efforts to preserve existing rules, practices, and traditions as they pertain to the right of Members to engage in extended debate on legislation before the United States Senate. Senators have expressed a variety of opinions about the appropriateness of limiting debate when we are considering judicial and executive branch nominations. Regardless of our past disagreements on that issue, we are united in our determination to preserve the ability of Members to engage in extended debate when bills are on the Senate floor. We are mindful of the unique role the Senate plays in the legislative process, and we are steadfastly committed to ensuring that this great American institution continues to serve as the world’s greatest deliberative body. Therefore, we are asking you to join us in opposing any effort to curtail the existing rights and prerogatives of Senators to engage in full, robust, and extended debate as we consider legislation before this body in the future.

Every Republican signatory to that missive has maintained a consistent position on this issue, when they were in the majority, and when they were in the minority. Exactly one Democratic signatory, Manchin, maintained this same consistency. Every other Democrat who signed it jumped at the very first opportunity to blow up the tool they vowed to be "steadfastly committed" to protecting when they were out of power – and a tool almost every one of them employed...again, as recently as last week. Their excuse is that "voting rights" are in peril, which isn't true. Understand that their excuse would have been different if circumstances were different, and will be different next time they're urged to try. With this group, the ends will always justify the means. They've made that crystal clear. For posterity, here is the roll call of lying, power-hungry hacks:

I added: "Extra special credit to Chris Coons (D-DE) who *spearheaded the letter,* only to abandon it (having previously expressed bullshit regret over his last nuclear option vote on judges). What a fraud. And I'd be remiss if I didn't note another signatory: Then-Sen. Kamala Harris." Harris is awful and has spent the last few days undermining faith in our elections. Her mindless flip-flop is to be expected. Coons, however, deserves additional scorn because he was the lead Democrat on the pro-filibuster letter. It was his project. He spent a lot of time during the Trump years appealing to Republicans' better angels, urging restraint and caution, etc., to some effect. But when it was his turn to practice what he used to preach when his party was out of power (including requisite expressions of regret over his last nuclear option participation), he did the exact opposite of what his own letter committed to. An embarrassing fraud. Republicans should think twice about teaming up with him on anything again. His word doesn't mean much. Then there are the purple state "moderates" who will soon ask voters to send them back to the Senate:

One more. These pro-nuke Dems are up & vulnerable this year:

Every last one of them walked the plank for Schumer, and some Democratic challengers ("moderates" like Conor Lamb in PA and Tim Ryan in OH) are pledging to join the nuke squad if they win. As Biden boasted this week, they are automatic partisan robots who will vote for anything they're told to support. They love telling the folks back home that they're independent thinkers who represent the interests of the state, etc., but when the chips are down, they're Biden/Harris/Schumer drones who have now formalized their willingness to do absolutely anything to advance their tribe's power and control. Remember, they betrayed their own "principles" and tried to end the filibuster in order to gut photo ID requirements to vote, permit ballot-harvesting, and force taxpayers to fund politicians' campaigns. Voters across the country – and especially in Arizona, Georgia, New Hampshire and Nevada – shouldn't forget. Here's another example of their duplicitous unseriousness on "voting rights," Jim Crow, crises, and the like:

Montana, like Georgia, is bad, bad, bad, you see. Attacking voting rights! But New York, like Delaware, is just fine. Because democracy, "voting rights" and January 6th, or whatever. It's dishonest hackery, all the way down. I'll leave you with Mitt Romney, who has very publicly bucked his own party, praising Manchin and Sinema to the hilt – infuriating the braying leftist hyenas who believe their empty "country over party" sloganeering only applies to Republicans: