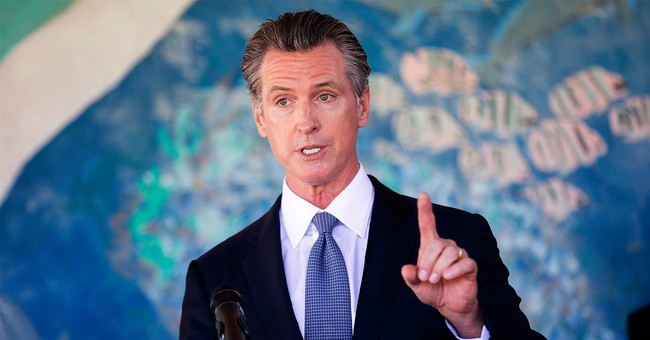 This isn't the first time he's done something like this either, which leads me to believe Newsom is looking at running for president in 2024 -- and expects his counterpart from Florida could be a potential threat in a general election.  In an interview with Yahoo! News, Newsom takes direct aim at Ron DeSantis, leveling various critiques and claims.  The fact that he decided to do so is interesting for its own reasons.  I suspect DeSantis would relish a Florida vs. California debate, for reasons I'll explicate below.  Let's start with Newsom's comments:

“They're performance artists, some of these people,” the governor snapped. “All you have to do is watch Fox and then just decide to plug in. I mean, it's about the easiest thing I've seen in politics. It's just, ‘What's the ticker on Fox primetime?’” “With respect, we'd have 40,000 more Californians dead if we took [DeSantis's] approach,” Newsom continued. “I do not look for inspiration to that particular governor … to not only the pandemic, but to other policy, including the absurdity that was his ‘woke’ initiative and the laughability around stopping something that doesn't exist, around critical race theory — just playing in and placating the right-wing punditry. It’s the CPAC primary. It’s rather absurd. And that's why I respectfully submit that so much of this is pure performance.” This week’s split-screen divide between DeSantis and Newsom reflected deeper disagreements over the role of government that have surfaced during the pandemic — and may one day resurface if the two politicians, who many believe harbor higher ambitions, ever meet on the presidential campaign trail.

Progressives have lied endlessly about Critical Race Theory in schools, and their dishonest denials are empirically false. But they're actually helpful to Republicans. School issues like radical curricula, and especially closures, have hurt Democrats badly.  The more they refuse to acknowledge reality and continue to insult the intelligence of parents, the more beneficial it is to the GOP.  As for Newsom's claim that if he'd eschewed lockdowns, mandates and restrictions, tens of thousands more Californians would be dead, is he right?  California's COVID death rate is substantially lower than Florida's, though Florida's rate (17th out of 50) is better than restrictionist states like New York, New Jersey, Rhode Island, Massachusetts, Michigan, and Pennsylvania.  It's almost as if there are relevant factors (like, say, Florida's disproportionately elderly population) beyond any governor's control, independent of policy approach.

The most important metric for saving lives during the pandemic is vaccination rate.  Florida has the highest vax rate among all 2020 Trump-won states and is better than the national average.  This, despite the prevailing leftist story that DeSantis hasn't encouraged vaccines (previous iterations have accused him of being too protective of seniors, and corruptly making vaccines as easy to get as possible).  There's also the matter of excess deaths over the course of the pandemic.  We've covered this issue previously, in debunking previous anti-Florida conspiracy theories and criticisms.  Let's look at this data, via US Mortality:

Florida clocks in at 20th (not bad for a state with an unusually high population of the highest-risk demographic.  California is four slots worse.  What explains this?  I'd imagine there are multiple contributing elements, including deaths linked to restrictions (suicides, drug/alcohol, delayed healthcare and screenings).  I'd imagine DeSantis would have a number of thoughts on this front, and could push Newsom (who loves imposing restrictions, but famously doesn't feel as strongly about following them, much like a growing roster of his fellow partisans) back onto a defensive footing.  Florida's kids have been in a much better situation during the pandemic, thanks to open schools and optional masking, compared to California's harmful closures.  On the broader subject of education, California spends thousands more dollars per student than Florida does, yet Florida's math and reading outcomes are clearly superior to California's, per these pre-pandemic metrics.  During the pandemic, California kids fell even further behind.

A healthy economy is also a crucial factor in measuring societal health, as economic well being begets other benefits.  California shut down its economy much harder, and for much longer, than Florida did.  Florida has been one of the most open states in the country, whereas California is the opposite.  Unemployment rates:  Florida 4.5 percent, with roughly 483,000 unemployed residents; California 6.9 percent with 1.3 million unemployed residents.  Meanwhile, Florida has announced tax cut plans.  California is debating doubling state taxes.  Where would you rather live?  In many cases, that's not a rhetorical question.  For the first time ever, California lost population in 2020, with nearly 200,000 people exiting the state.  Meanwhile, Florida gained more than 200,000 residents between July 2020 and July 2021 (becoming more Republican in the process).  People are voting with their feet and California is losing. As I said, I think DeSantis would welcome this fight, and I'd guess a national referendum on Florida vs. California would end poorly for the Democrats.  And perhaps Newsom should "look for inspiration to that particular governor." And since we discussed 'rules for thee' Democrats in this post, I'll leave you with this:

Sen. Kirsten Gillibrand sent me a statement that she would "do better" in the future after a restaurant owner in New York City posted a video of her "blowing past [the] manager" and ignoring signs requiring masks.https://t.co/DSM8oahfGX