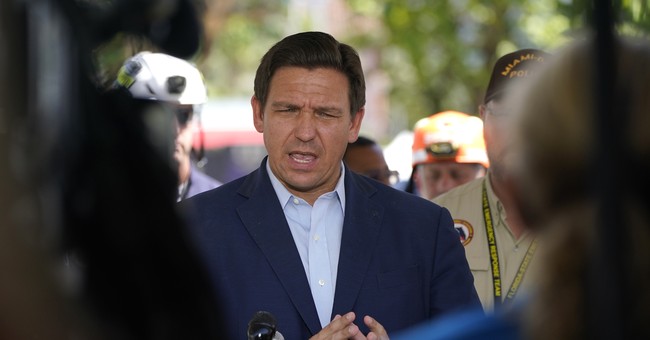 You might recognize the name Daniel Goldman from the first Trump impeachment proceedings.  He served as House Democrats' lead counsel during that Ukraine-related saga, which resulted in an acquittal, almost precisely along party lines.  On Twitter over the weekend, Goldman echoed many of his fellow partisans by attacking the Republican governors of Texas and Florida, falsely accusing them of "resisting" masks and vaccinations -- asserting that their citizens will die in disproportionate numbers as a result.  He pronounces himself "baffled:"

I’m baffled by the short-sightedness of @GovRonDeSantis and @GregAbbott_TX. It may be good politics today to resist masks and vaccinations, but hard to believe it will be good politics after a disproportionate number of Floridians and Texans die from Covid as a result.

It's true that both leaders have opposed government-imposed mask mandates, with Ron DeSantis recently ensuring that parents will have the ultimate authority to make mask-related decisions for their children in Florida schools this fall (districts can impose mandates, so long as parents have opt-out opportunities).  One can question whether these governors should soften their stances and rhetoric about masks, given that an extremely contagious strain of COVID is now dominant within the US (and hitting their states especially hard at the moment).  Both men may counter that previous pile-ons and dire predictions did not even come close to panning out the way apocalyptic critics had projected, and it's therefore good policy and politics to maintain a relatively light governmental touch.  Relatedly, there is some data that may suggest the Delta wave has started falling in the most adversely-affected states, hopefully an indication that the encouraging UK trajectory is coming to America.

The battle over masks -- which can be helpful in certain settings, especially among the unvaccinated, but are hardly a bulletproof solution -- also strikes me as somewhat tangential and highly tribal at this stage.  The best way to combat the virus is to get as many people vaccinated as possible.  And is simply not true that DeSantis and Greg Abbott have "resisted" vaccinations.  To the contrary: Abbott got vaccinated on camera as soon as the shot was available to him, he's urged Texans to get vaccinated -- 'strongly' encouraging vaccination in a recent executive order barring government vaccine mandates -- and recently produced this PSA:

Governor Greg Abbott today released a public service announcement (PSA) to kick off Tax-Free Weekend in the Lone Star State, encouraging Texans to stock up on school supplies and get their COVID-19 vaccine ahead of the new school year. In the PSA, the Governor encourages Texans to take part in Tax-Free Weekend and urges parents, teachers, faculty, and students 12 years and older to get vaccinated against COVID-19. The Governor notes in the PSA that Texans can receive their COVID-19 vaccine at many of the same stores where they can shop during Tax-Free Weekend.

That is the opposite of "resisting" vaccinations. Meanwhile, here are a few reminders of DeSantis' pro-vaccine efforts in Florida:

For all the endless broadsides against DeSantis (remember when he was attacked by many of these same critics for correctly prioritizing seniors for vaccines?), Florida has the highest vaccination rate of any red state -- and its COVID/excess death rates are at or better than the national average, largely because the state did a good job of protecting its most vulnerable citizens (Florida, of course, has a disproportionately high population of seniors). Again, one can argue that perhaps certain GOP governors could be more aggressively vocal, impose mandates among state employees, or try inducement methods like lottery-style prizes for vaccinated people.  But it's a smear -- a common, politically-motivated one -- to accuse Abbott and DeSantis of "resisting" vaccinations.  That's just a lie.  And it's not exactly subtle what's going on here:

And so it begins... pic.twitter.com/2AWN6c0ixD

Here is another stark illustration of how high vaccination rates are decoupling COVID cases from hospitalizations and deaths, whereas unvaccinated people are needlessly and disproportionately suffering:

It also sure would be super helpful if the CDC and top public health officials would stop utterly butchering their messaging to the American people by wrongly suggesting that the vaccines don't really help prevent the transmission of COVID.  Dr. Walensky herself is especially and maddeningly prone to these misinformation-spreading, confidence-eroding debacles.  Stonewalling reasonable questions is also deeply counter-productive.  If you're on the fence about getting the jab, I'll leave you with this, which is tough to watch but important:

Louisiana Congresswoman Julia Letlow lost her husband Luke in December, just weeks after he was elected to the same Congressional seat and before he could be sworn in.

In an exclusive interview with @DavidBegnaud, @jbletlow shared a message for those who remain unvaccinated. pic.twitter.com/4WkvkXAIPh