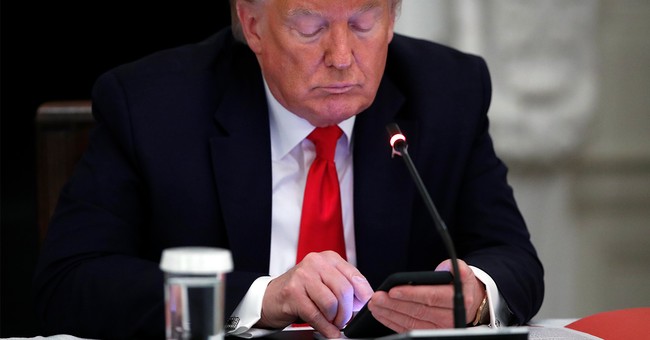 Not to be the resident naysayer around here (I've written about positive polling when it breaks), but I started waving a red flag about the president's deteriorating re-election prospects a few weeks ago -- and his standing has only slipped further since then.  I realize that some Trump fans will discount the polls no matter what, and that's their prerogative.  Granted, some state level polls failed badly in 2016, but the national polling average wasn't very far off at all.  It's true that a number of major pollsters were way off in the lead-up to the election, showing Hillary Clinton ahead by double digits and poised to waltz to a blowout victory, and we all remember how that turned out.

A few differences and problems this time around, however: First, Trump is not a challenger riding a wave of desired change anymore. He's the incumbent, and very few people don't know how they feel about his leadership or him personally.  Second, his 2020 opponent is not widely reviled the way Hillary Clinton was.  Team Trump is trying to define Biden negatively, but they're not really succeeding yet.  By dismissing the very real challenges he's facing, Trump supporters are helping to guarantee his loss, especially if much of the party remains delusional about what's happening.  Why?  Serious changes are needed to reset this race, and that reset can only occur if people are willing to accept the reality that Trump is now, as Chris Christie recently assessed, the underdog.  Peggy Noonan also addressed the 'shy Trump voter' effect on polling in her latest column:

Some of them, maybe half, are amused by his nonsense decisions and statements—let’s ban all Muslims; let’s end this deadbeat alliance; we have the biggest, best tests. But they are half of 40%, and they would stick with him no matter what. He doesn’t have to entertain them! He had to impress and create a bond with others. The other half of his base is mortified by his antics and shallowness. I hear from them often. They used to say yes, he’s rough and uncouth and unpolished, but only a rough man can defeat the swamp. Now they say I hate him and what he represents but I’ll vote for him because of the courts, etc...Nobody knows what’s coming. On New Year’s Eve we couldn’t imagine the pandemic, economic contraction and protests. We don’t know what will happen in the next four months, either. I believe in the phenomenon of silent Trump voters, people who don’t tell anyone, including pollsters, that they’re for him because they don’t want to be hassled. But eight, 10 or 14 points worth? No.

Among the last eight national polls posted on RealClearPolitics, Trump is trailing Joe Biden by an average of nearly 11 points.  And state-level surveys reflect that sort of national environment:

Joe Biden increased his lead in every state since their last poll, with massive jumps in WI/MI/PA/NC.

Before you scoff about a New York Times poll, recall that Trump has fared pretty well in this series earlier in the cycle.  Also note that Trump carried every single state listed back in 2016.  The president is obviously within striking distance and the margin of error in several of Fox's polls, and I doubt Florida will end up being anything other than a one-to-four point race, per usual.  But taken together, these data sets are pretty grim for the incumbent.  Biden doesn't need to win any of these of states to win the electoral college.  On the brighter side, there's evidence that Trump has room to grow in some of these states.  Here's the Texas breakdown, for instance:

Again with the growing slack between approval (50%) and vote share (44%.) Low hanging fruit, yes, but ones you shouldn't have to waste time picking at this point. https://t.co/4fbwSeZfVQ

His approval rating is six points higher than his current vote share in the Lone Star State, so it seems likely that he can win over a large portion of those who aren't sure about pulling the lever for him just yet, despite approving of the way he's handling the job.  But as the GOP strategist cited above comments, if he's at all worried about that dichotomy in Texas, he's got bigger problems.  Trump is also underperforming other Republicans in the Fox polling.  Sen. John Cornyn, for instance, is up double digits over potential Democratic challengers in Texas, in the same survey that shows Trump's down a point.  Now compare and contrast these GOP governors' approval ratings in the Fox poll states with Trump's margins:

Bottom line: You can tell yourself that the polls are all wrong (they were by and large predictive in 2018, with some notable exceptions), but that seems unwise if you actually want Trump to win.  He needs a new direction in this campaign.  Whatever he's doing now isn't working.  It's entirely possible that the economy will instill confidence by the fall, Coronavirus will be on the way out, and the current unrest will subside as people start to feel a broader sense of normalcy -- perhaps with blowback against the lawlessness playing out in many American cities.  Those factors would brighten the picture for the president and his party.  Trump can still win the election, and it'd be insane to declare this thing over in June.  But the president will need some events to break his way, Joe Biden will need to take some serious hits, and Trump's campaign messaging will need to start resonating.  A good start would be the president being able to articulate a vision for what he'd do in a second term.  Because this ain't it:

Here's the transcript of Trump's response when he was asked what are his top priorities for a second term. pic.twitter.com/XKMawRiXFs

I know some people want to believe that Trump's exhausting feuds, constant drama, and intemperate conduct "don't matter," and only Beltway TDS-types care.

If that's what you think, this focus group of undecided PA voters should be a flapping red flag: https://t.co/8IePG23ll3