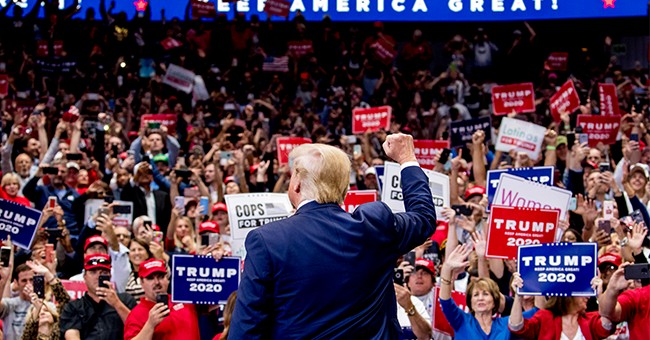 It has been a very turbulent few weeks for President Trump, who has watched his national support tumble as he faces impeachment at the hands of House Democrats.  But even as nationwide polling shows him in relatively rough shape among all voters on the issue of impeachment (though it's not as bleak as the press coverage would indicate), surveys of voters in key swing states show far less enthusiasm over the prospect of removing Trump from office.  Similarly, even as Trump's average job approval rating sags, and even as he trails multiple Democrats in hypothetical head-to-head contests, his standing in the places that will matter the most next November is much stronger than the conventional wisdom would suggest.

A fresh batch of polling from the New York Times and Siena College demonstrates that against Joe Biden, Trump is only a modest underdog at this point, battling within the margin of error among likely voters in a slew of battlegrounds.  Against Bernie Sanders, Trump is a slight favorite.  And in a potential battle with Elizabeth Warren, Trump is tied or leading in all six tossup states tested. Some on the Left are eyeing these numbers and getting nervous:

Biden holds razor-thin leads in every state but North Carolina, whereas Sanders trails in four of the six battlegrounds polled, while managing a tie in Wisconsin and pushing ahead in Michigan.  Elizabeth Warren, the media favorite, is behind Trump by two-to-four points everywhere except for Arizona, where the best she can muster is a tie.  Among registered voters, the Democrats fare better -- Biden especially -- but Trump remains in strong contention with the two Socialists:

“Biden voters who say Warren is too far to the left are relatively well educated and disproportionately reside in precincts that flipped from Mitt Romney.” https://t.co/hEOXNUALjP

Sanders looks like he'd enter a toss-up race; Warren appears to be a clear underdog, in spite of the incumbent's very soft approval and favorability.  This chart from the data is really fascinating:

Trump's large advantage among non-college-educated whites is undiminished against all of the 'big three' Democrats, with Biden and Sanders performing marginally better.  But in terms of re-creating Hillary Clinton's near-victory coalition, Biden builds on her support among college-educated whites, and approximately holds serve among blacks, Hispanics and other minority groups.  Sanders is a mixed bag, but is notably underperforming Hillary by ten percentage points with African American voters.  Warren hits her mark among college whites, but dramatically under-performs Mrs. Clinton with all other groups.  Direct hypothetical match-ups are very premature at this stage of the game, but these NYT/Siena findings are useful in that they serve as a serious reminder that even though Trump is at a low ebb in his presidency, and even though many of the national numbers look ugly for him, he could prove quite difficult to beat.  And, at least for now, Biden's longstanding electability argument is a powerful one.

Will any anxious, "bubble-dwelling" Democratic voters engage in some aforementioned and recommended "major soul-searching," based on polling like this?  If the former Vice President's team can't exploit this survey and use it to their advantage, they're even worse at this than feared.  Parting thought: Will the journalists who comprise Warren's base get rattled by these results?  Might her cheerleaders at SNL reconsider their comedy-second boosterism?

This New Peer-Reviewed Article Could Be a Game-Changer
Townhall
Terrorist MUCH?! The New Yorker on BLAST for sharing piece from climate change lunatic calling for LITERAL destruction of property
Twitchy
Trump Makes It Clear He's Running, Lights up Georgia Rally on Biden, Durham, and the Audit
Redstate
It Gets Worse: Look Who Worked Together to Frame Donald Trump With Fake Russia Hoax
PJ Media