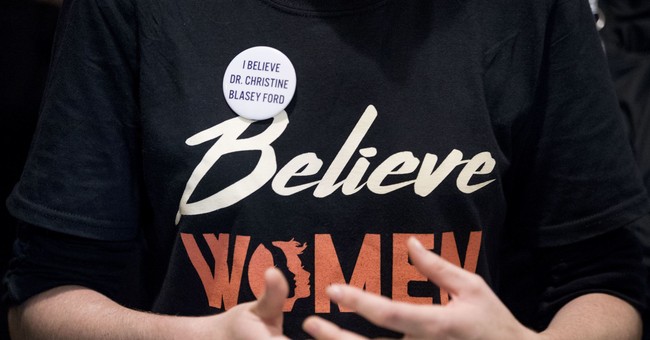 Having watched their own situational values and extraordinary hypocrisy laid bare, in indisputable and excruciating detail, many on the Left -- including activists and a bevy of Democratic politicians -- are brazenly attempting to rewrite history. They're trying to convince Americans that they never advocated that all women who come forward with sexual abuse allegations ought to be believed and that when they spoke of "believing" survivors, they were merely insisting that women be taken seriously and listened to. It's a lie. Here's the latest installment of this revisionist gaslighting:

This from Susan Faludi is so important. Feminists never said "believe all women" - the right inserted the "all." Feminists said "believe women": that is, start with the assumption that women are telling the truth instead of reflexively doubting them. https://t.co/CtQ1gyCsEC

This piece is heavily premised on the narrow point that the preferred social media hashtag was #BelieveWomen (or #BelieveSurvivors), without the added "all," which is framed as a "right-wing trap." While quite a few people on the Left did indeed employ "all" in their mantra against Brett Kavanaugh's nomination, harping on this distinction is an exercise in obfuscation. Robby Soave makes this point at Reason:

Faludi is narrowly right that "believe women" was the more popular phrasing among #MeToo activists, and that contrarians were more likely to introduce the word "all" as a means of pointing out how silly the concept was. But whether the phrase contains "all" is unimportant: It means the same thing, regardless. The command to believe group X is straightforwardly and obviously a plea to have faith in the entire collective entity. Faludi claims in her piece that "believe women" is actually the opposite of "believe all women," but this is absurd. She is, to use a term beloved by victims' rights advocates, gaslighting her readers...#MeToo advocates demanded a presumption of belief for every individual who claims to be a sexual misconduct victim: i.e., believe all women.

It was equally clear when Biden stated the mantra during the Brett Kavanaugh Supreme Court confirmation hearings: "For a woman to come forward in the glaring lights of focus, nationally, you've got to start off with the presumption that at least the essence of what she's talking about is real—whether or not she forgets facts, whether or not it's been made worse or better over time." Biden was clearly instructing the public to believe even the allegations that seem doubtful or flawed: The all is unstated but quite implicit. The problem, of course, is that the implication of this mantra is ridiculous. We know that some women lie—not because they are women but because they are human beings, and human beings are capable of all sorts of deceptions, large and small. It's the task of journalists to consider claims, gather evidence, and help the public to make informed decisions. Belief is not really an aspect of this process.

Biden's standard was quite clear, and he repeated the then-popular line that a woman's willingness to enter the "glaring lights" fray is significant evidence of her truthfulness. But Anita Hill was willing to wade into those waters, despite significant evidence that she was lying about Clarence Thomas (with a bonus appearance from Joe Biden). Julie Swetnick did the same, only to recant when her story totally fell apart -- but not before Senate Democrats seized on her absurdly lurid allegations to demand Kavanaugh withdraw. While insisting upon fewer civil rights protections for accused college students, Biden would like people to discard his previous comments when it comes to presuming an "essence" of truth behind Tara Reid's claim of sexual assault against him (to which we'll return in a moment). Ramesh Ponnuru also notes this glaring problem with The New York Times column, right out of the gate. Its author writes this:

Joe Biden has been accused of sexual assault, and conservatives are having a field day, exultant that they’ve caught feminists in a new hypocrisy trap. A woman, with no corroboration beyond contemporaneous accounts, charges a powerful man with a decades-old crime? Hmm, doesn’t that sound mighty close to Christine Blasey Ford’s complaint against Supreme Court nominee Brett Kavanaugh?

Ponnuru calmly and correctly responds with this:

Well no, it doesn’t, because the complaint against Kavanaugh didn’t have contemporaneous accounts to back it up. It was an aspect of the allegation that was pretty hard to miss for anyone giving it even cursory attention. Faludi’s attempt to get us to pretend not to know anything about the fairly recent past in this passage is a nice preview for what she attempts to accomplish in the rest of the op-ed...Of course the point of ['Believe Women'] was to flip the presumption of innocence. The flipped presumption was omnipresent in the Kavanaugh debate. Take Senator Richard Blumenthal (D., Conn.), who said, in the midst of the confirmation fight, “We need to believe survivors.” If that didn’t mean that accusations should be presumed true, it didn’t mean anything. Feminists didn’t patiently explain to him that he had bungled the meaning of the slogan when he said that. He hadn’t. He just, like them, didn’t mean it.

I'd inject two more examples, among a much wider litany, both from other Democratic members of the judiciary committee. Dull-witted bigot Mazie Hirono of Hawaii literally told male defenders of the presumption of innocence to "shut up," while averring that Dr. Ford had to be believed, and casting questions about her story as smears:

Hirono used the insane Swetnick lie to call for Kavanaugh's withdrawal. Because she believed women. And Delaware's Chris Coons explicitly advocated for what Ponnuru calls the "flipped presumption," as it applied to Kavanaugh:

Coons, a Biden supporter, dismissed Tara Reade's accusation out of hand, mouthing misleading campaign talking points before Biden even deigned to personally deny the claim. Again, there is much more contemporaneous evidence supporting Reade's story than was ever presented by Ford (whose top witness and close friend doesn't believe her, and told the FBI she was pressured to lie), or Ramirez or Swetnick, both of whom are discredited. Coons stated that Kavanaugh bore the burden of disproving allegations against him, yet he was content with his ally denying a more heavily-corroborated claim through a spokesperson. Again, we must believe women, except when cannot believe women.

As for Reade's story, I'd encourage you to read these two pieces, which outline what we do and do not know. While there are strands of evidence and corroboration that fortify her story, there are also troubling details that suggest stories have changed dramatically, and that Reade has a history of making escalating accusations. Weighing this information and stories like this are not "victim blaming" or "survivor smearing." Such endeavors represent truth-seeking, which seems to be acceptable, if not welcome, to much of the "Believe Women" crowd -- but only if said examinations of facts and evidence are helpful to the Left's overall ideological project, particularly on unfettered abortion. I'll leave you with this "right-wing trap" flashback: