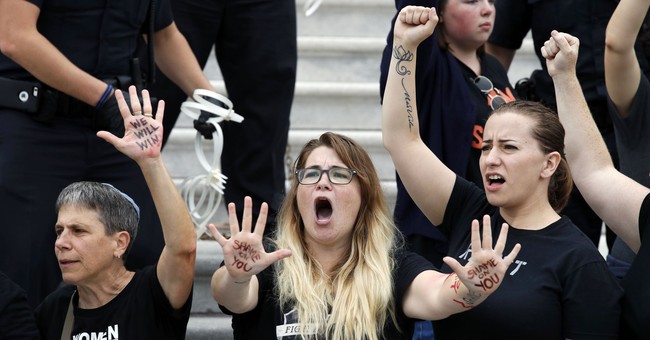 By "women's rights groups," in this case, I mean "the abortion lobby," whose extreme agenda happens to be opposed by a large majority of American women. During the Brett Kavanaugh firestorm, the abortion industry went all-in on the confirmation fight, opposing the nomination vociferously and loudly joining the #MeToo frenzy over totally uncorroborated allegations. Via writer Stephen Miller, here's a partial reminder of how they leapt into the fray on behalf of certain alleged victims:

We believe Deborah Ramirez. We believe Christine Blasey Ford. And we believe abusers everywhere must be held accountable for their actions. The House Judiciary issued subpoenas earlier this yr to investigate Kavanaugh—now would be a good time for answers.https://t.co/jCvkjZrzeH

Brett Kavanaugh has absolutely no business sitting on the Supreme Court and his nomination must be withdrawn immediately.#BelieveSurvivors #StopKavanaugh https://t.co/XMbPCbVhqo

We are standing in solidarity with Dr. Christine Blasey Ford, Deborah Ramirez, and all survivors of sexual assault. We believe women. We #BelieveSurvivors. pic.twitter.com/8zAaV10iuz

These people are frauds. They believe in restrictionless abortion, not in protecting women or standing up for survivors. It's about power and an agenda; nothing more, nothing less. Before we go any further, I'll simply remind you that there was zero contemporaneous, corroborating evidence against Kavanaugh. None. Ford's accusation was based on her own decades-old memory, and her top witness and friend not only declined to corroborate her story, but has actually admitted she does not believe Ford's story, reporting to the FBI that she was pressured to lie in order to harm Kavanaugh's nomination. And the Ramirez story is somehow even weaker. Nevertheless, the mantra on the Left at the time was to "believe women" and support victims. Evidence was secondary, or even tertiary. Now, with the pro-abortion political party's presumptive nominee facing a serious sexual assault allegation -- leveled by a lifelong Democrat, who has much more contemporaneous evidence backing her claim -- the "believe women" abortion cheerleaders have fallen conspicuously silent:

The candidate himself has said nothing about the accusation against him, aided by a total media blackout on questions, which is looking increasingly unsustainable. The allegation has been public for more than a month, yet this presidential candidate has not deigned to utter one word on his own behalf, nor has he been asked to do so, despite taking dozens (if not hundreds) of press questions over that period of time. The Biden campaign issued a simple denial and successfully pressured The New York Times to airbrush its coverage of the matter. Then, in a neat trick, the Biden campaign churned out talking points citing that very airbrushed New York Times story as 'proof' that the allegation is baseless. And their surrogates, including a very thirsty aspiring running mate, are falling in line:

First, that is not what the Times actually found, which even CNN can't help but notice. Second, more evidence has come to light (Larry King interview, additional contemporaneous corroborators) since the Times article was published, which makes the campaign's go-to line even less compelling. Third, notice the shift in language and standards, and not just from Abrams. During the Kavanaugh affair, the standard was to believe women. Period. That's the view that Joe Biden himself endorsed. Now, they're saying that women should be heard and that serious accusations should be taken seriously. I agree with the latter standard, which is the one I applied in the Kavanaugh case -- but for many on the Left and in the media, it's a new and glaringly inconsistent stance. The following questions should be put to every single one of them, even if they're desperate to keep their mouths sealed shut, which is also a dramatic departure from their high-decibel preening in 2018:

(1) Do you share Joe Biden's 2018 position that women alleging assault should be believed and presumed to be telling the truth?

(5) Based on all the available evidence, why should Christine Blasey Ford be believed, but not Tara Reade?

There is no good answer to that last one, and the discomfort it may cause is the reason it must be asked persistently. I'll leave you with Reade torching Hillary Clinton, whom she supported twice, for aiding and abetting Biden -- as well as this related, acidic one-liner: