Lefty Writer: Let's Face It, the IG Report Is Damning for the FBI, Adam Schiff, and Much of the Media 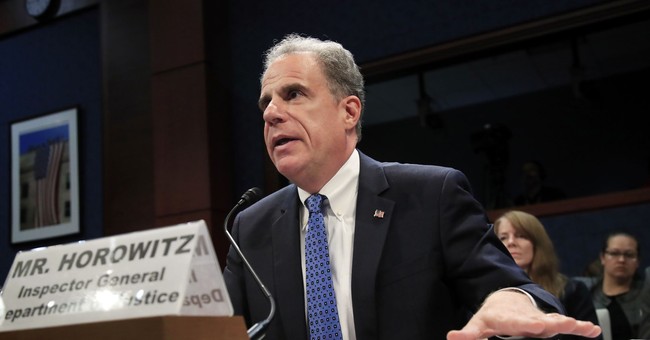 I don't agree with Matt Taibbi terribly often, but I've admired his ability to set aside his ideological proclivities and deep dislike for President Trump as he issues scathing indictments of the media's hysterical hive-mind, groupthink on the Russia saga.  His devastating contribution to this genre of commentary in late March made some waves, and now he's followed up with a brutal piece in Rolling Stone on the DOJ Inspector General report. Specifically, he argues, IG Michael Horowitz uncovered numerous examples of serious omissions and misconduct in the FBI's handling of the Russia/Trump investigation -- particularly as it pertains to obtaining FISA warrants for domestic surveillance and its disproportionate reliance on the fatally flawed Steele dossier (see below).  Let's start with the FISA issue:

Horowitz describes at great length an FBI whose “serious” procedural problems and omissions of “significant information” in pursuit of surveillance authority all fell in the direction of expanding the unprecedented investigation of a presidential candidate (later, a president)...Officials on the “Crossfire Hurricane” Trump-Russia investigators went to extraordinary, almost comical lengths to seek surveillance authority of figures like Trump aide Carter Page...Likewise, the use of reports by ex-spy/campaign researcher Christopher Steele in pursuit of Foreign Intelligence Surveillance Act (FISA) authority had far-reaching ramifications. Not only did obtaining a FISA warrant allow authorities a window into other Trump figures with whom Page communicated, they led to a slew of leaked “bombshell” news stories that advanced many public misconceptions, including that a court had ruled there was “probable cause” that a Trump figure was an “agent of a foreign power.” There are too many to list in one column, but the Horowitz report show years of breathless headlines were wrong.

As Byron York has also documented in detail, the credibility of that infamous dossier -- which, despite nonstop assurances from Democrats and the media to the contrary, was "essential" and "central" to the probe, according to the IG -- has been reduced to a pile of rubble:

Look at three of dossier's most incendiary charges: 1) The 'well-developed' conspiracy. 2) The Carter Page bribe. 3) The pee tape. FBI found embarrassing lack of evidence for all. Yet all did terrible damage. 3/9 https://t.co/IWOUnOV7Gi

Press figures have derided the idea that Steele was crucial to the FISA application, with some insisting it was only a “small part” of the application. Horowitz is clear:  'We determined that the Crossfire Hurricane team’s receipt of Steele’s election reporting on September 19, 2016 played a central and essential role in the FBI’s and Department’s decision to seek the FISA order. ' ... The Steele report reads like a pile of rumors surrounded by public information pulled off the Internet, and the Horowitz report does nothing to dispel this notion. At the time the FBI submitted its first FISA application, Horowitz writes, it had “corroborated limited information in Steele’s election reporting, and most of that was publicly available information.” Horowitz says of Steele’s reports: “The CIA viewed it as ‘internet rumor.’” Worse (and this part of the story should be tattooed on the heads of Russia truthers), the FBI’s interviews of Steele’s sources revealed Steele embellished the most explosive parts of his report.

The “pee tape” story, which inspired countless grave headlines...and plunged the Trump presidency into crisis before it began, was, this source said, based a “conversation that [he/she] had over beers,” with the sexual allegations made… in “jest”! ...In fact, charged by Steele to find corroboration, the source could not: corroboration was “zero,” writes Horowitz...The impact was greater than just securing a warrant to monitor Page. More significant were the years of headlines that grew out of this process, beginning with the leaking of the meeting with Trump about Steele’s blackmail allegations, the insertion of Steele’s conclusions in the Intelligence Assessment about Russian interference, and the leak of news about the approval of the Page FISA warrant. As a result, a “well-developed conspiracy” theory based on a report that Comey described as “salacious and unverified material that a responsible journalist wouldn’t report without corroborating,” became the driving news story in a superpower nation for two years.

Taibbi reserves some of his most pointed venom for the blinkered, obsessed mainstream media and it's ongoing, awful coverage of the whole matter, some reminders of which were also flagged in a lengthy Twitter thread:

A final and critical observation by Taibbi is that, despite heaps of scorn and mockery from the press (and bogus counter-messaging from Democrats), the House Intelligence GOP memo (or the "Nunes memo", which was reinforced on key points by another memo authored by some Senate Republicans) was largely correct:

Democrats are not going to want to hear this, since conventional wisdom says former House Intelligence chief Devin Nunes is a conspiratorial evildoer, but the Horowitz report ratifies the major claims of the infamous “Nunes memo.” As noted, Horowitz establishes that the Steele report was crucial to the FISA process, even using the same language Nunes used (“essential”). He also confirms the Nunes assertion that the FBI double-dipped in citing both Steele and a September 23, 2016 Yahoo! news story using Steele as an unnamed source. Horowitz listed the idea that Steele did not directly provide information to the press as one of seven significant “inaccuracies or omissions” in the first FISA application...

There was gnashing of teeth when Nunes first released his memo in January, 2018. The press universally crapped on his letter, with a Washington Post piece calling it a “joke” and a “sham.” House Speaker Nancy Pelosi slammed Nunes for the release of a “bogus” document, while New York Senator Chuck Schumer said the memo was intended to “sow conspiracy theories and attack the integrity of federal law enforcement.” Many called for his removal as Committee chair. The Horowitz report says all of that caterwauling was off-base. It also undercuts many of the assertions made in a ballyhooed response letter by Nunes counterpart Adam Schiff, who described the FBI’s “reasonable basis” for deeming Steele credible. The report is especially hostile to Schiff’s claim that the FBI “provided additional information obtained through multiple independent sources that corroborated Steele’s reporting.”

People in positions of power, especially the respectable ones (I don't expect much from the likes of Adam Schiff), need to grapple with these findings and offer explanations for previous wrong or misleading assertions.  For instance, I agree with this:

It’s unpresidential and dangerous for Trump to attack the FBI director the way he did. That said, Chris Wray was also insisting that the Nunes memo on FISA abuse and Carter Page was inaccurate in 2018. Horowitz proved Wray’s objections were false. He needs to explain himself.

Before you go, and perhaps during a pause in today's IG testimony before the Senate Judiciary Committee, listen to my full interview with the Wall Street Journal's Kimberly Strassel, who has followed this entire contretemps extremely closely: