Analysis: 'The Memo' Isn't What Staunch Trump Defenders -- or Haters -- Want It To Be 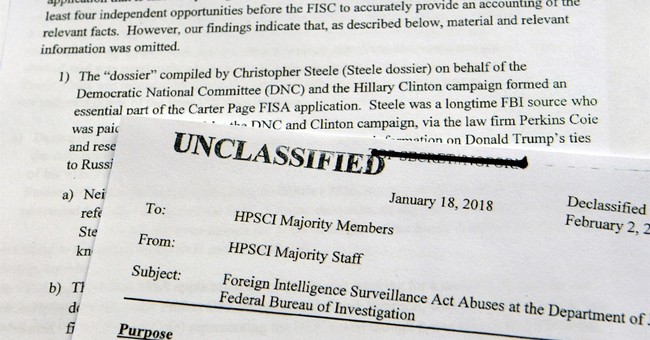 'The Memo' is out, and the air is thick with partisan overreach.  The four-page, formerly-classified memorandum is available here.  Having read it, my overall reaction is that it is generally what we thought it might be: A document produced by Republicans that raises some concerning questions about the legal underpinnings of a FISA warrant that permitted government surveillance on a US citizen and former member of the Trump campaign. Some of those questions can, and should, be answered through the release of more information.  Here's what the memo is not: It is not a total nothingburger, the mere release of which poses a grave threat to our intelligence-gathering capabilities or national security.  Nor is it a 'smoking gun' that either proves gross wrongdoing at the FBI, or undermines the integrity of Robert Mueller's special counsel investigation.  Three big takeaways:

(1) The central claim being advanced by those who are outraged over the contents of Nunes' memo is that it proves the FISA warrant targeting ex-Trump aide Carter Page would never have been approved without the controversial and unverified Steele dossier.  That's what (former) FBI Deputy Director Andrew McCabe testified under oath, the memo states.  But there are two issues with those conclusions.  First, McCabe is not quoted directly in the document (and retaliatory leaks are already disputing the words attributed to him).  Rather, his testimony has been characterized by the memo authors, and even they stipulate that the Page FISA warrant would not have been sought "without Steele dossier information."  Sought vs. approved is potentially a big distinction here, as is "the Steele dossier" vs. dossier "information."  Via a knowledgeable attorney:

This matters because the crucial question when it comes to whether an abuse of FISA has occurred is whether the FISC had probable cause to grant the Page warrant application. The Nunes memo doesn't answer this question.

In other words: Was the dossier used as a jumping-off point for investigators, who proceeded to chase down leads and managed to corroborate enough of its contents to piece together a viable warrant application that satisfied a FISA judge?  Or was the dodgy dossier itself the primary source upon which the warrant was granted?  We don't know.  The original FISA warrant application should be scrubbed and redacted as necessary for national security purposes, then released.  Second, Nunes' memo describes the entire Steele dossier as "salacious and unverified," attributing that verdict to former FBI Director James Comey.  But that's not exactly what Comey testified.  He referred to some "materials" within the dossier as such.  If other elements were examined and verified, and then used as a basis for a warrant, that's a different story.  Again, the FISA warrant and the Democratic counter-memo should be vetted and made public, as soon as possible.  I agree with Speaker Ryan on the latter point:

(2) Did the FBI and DOJ withhold crucial information from the FISA court regarding the provenance of the evidence it presented to obtain the Page warrant?  The Nunes memo says 'yes,' and that's a concerning charge.  Depending on the (still unclear) role the dossier played in the judge's decision to approve the warrant, omitting pertinent facts about an underlying document that was used to justify targeting a figure tied to a major presidential campaign would raise ethical and legal red flags.  Was the judge informed that a significant basis for the evidence being reviewed was: (a) an opposition research file compiled by a very biased source (Steele) who was deemed unethical and unreliable (by the FBI), and (b) paid for by the Democratic National Committee and the opposing campaign?  If not, that is a serious problem. People who are worried about significant politicized biases among some top actors within the FBI and DOJ aren't just dreaming up conspiracies.  But wait, the Democrats say salient facts about the sourcing of the FISA warrant were not withheld:

I'm not inclined to just take the word of Adam Schiff, who is likely a prodigious leaker in his own right, and is unquestionably an agenda-driven partisan.  But if there's evidence that contradicts a major allegation in the GOP memo, let's see it.  We need more information; the Nunes memo is inadequate as a singular or definitive source here.

(3) Crucially, the document released by House Intelligence Committee Republicans demonstrates that the counterintelligence investigation into Trumpworld's potentially suspicious connections to the Russian government did not begin with the much-discussed FISA warrant targeting Carter Page.  Another relatively low-level Trump campaign aide (George Papadopoulos) was already in the feds' crosshairs, due to apparent drunken boasting to Australian diplomats.  It is therefore a major stretch, if not outright false, to assert that the entire probe into the overall Russia matter is somehow the 'fruit of a poisoned tree' -- even if you believe the surveillance of Page to be an outrageous affront.  The wider Russia investigation, which Robert Mueller basically inherited, commenced separately, and was triggered by the actions of another individual:

Here’s potentially the most important paragraph in the memo. It appears to confirm the NYT’s scoop — which was that the counterintelligence investigation began BEFORE the FISA applications against Page. Papadopoulos was already under investigation. Wow: pic.twitter.com/VadOFVYAUH

That fact is sitting right there in the Republicans' own memo.  Furthermore, the surveillance on Page did not begin until months after he'd left the Trump campaign:

Paragraph 1a of this Nunes memo says that DOJ sought a FISA warrant for Carter Page on October 21, 2016. Page stepped down from the Trump campaign in September 2016 (a fact "curiously" omitted from the memo). This really is what we've been waiting for?

Another important point: I should have specified, this round of "surveillance on Page."  Why?  Because he'd attracted federal investigators' attention vis-a-vis shady Russian ties years earlier, dating back to 2013 and 2014 -- long before Donald Trump was even a candidate for president.  The sequencing of the Papadopoulos investigation launching, followed by the Page warrant (which, again, was issued after he'd departed the Trump campaign) is really important context.  My bottom lines:

I have concerns about the provenance/financing of the dossier & its (still unclear) role in obtaining the FISA warrant...

BUT Carter Page was SUPER SKETCHY & the feds had reportedly started surveilling him *years* earlier (2014). How was the 2016 warrant unconscionable?

We need more information in order to determine the credibility of some of the accusations and implied accusations flying around.  Predictably, some political actors are reacting to the GOP memo as if it's a national security risk or even a crime unto itself, which is nonsense.  Others are dubiously citing it as vindication for President Trump, or a strong basis on which to start cleaning house by firing people like Rod Rosenstein and Bob Mueller.  It's nothing of the sort.  In fact, contrary to some of the pre-release hype, Rosenstein was barely mentioned in the memo at all; his name came up virtually exclusively in the context of approving the extended surveillance against Page, which very well could have been an entirely defensible decision by the time he made it (even if one is skeptical of the initial warrant).  I'll leave you with a statement from House Intelligence Committee Republican Trey Gowdy, a former federal prosecutor who has seen reams of relevant evidence that we have not -- and who pushed for the release of this memo, albeit while successfully advocating for a more careful and methodical process than others would reportedly have preferred.  This assessment ought to hold weight:

As I have said repeatedly, I also remain 100 percent confident in Special Counsel Robert Mueller. The contents of this memo do not - in any way - discredit his investigation.