Reminder: No Meaningful Evidence Corroborates Any of the Kavanaugh Accusations, Several of Which Fell Apart 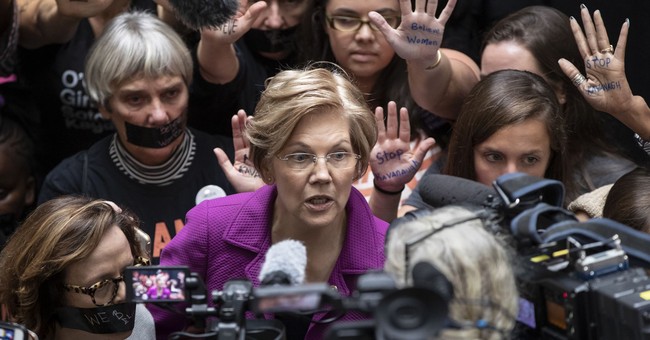 Now that we're revisiting the Kavanaugh mess -- bring it on, I wrote this morning -- it seems worthwhile to revisit the known facts of each supposedly 'credible' accusation leveled against him.  This insight strikes me as exactly correct, in terms of assessing the tactics, motives, and goals of the smear brigade.  It's a deeply cynical pattern:

And then to say, “well if there is nothing there, why are there so many dubious, uncorroborated allegations?”

Based on the media's coverage, there have been five allegations against the now-associate justice that were not dismissed out of hand by the rantings of crazy people (some of which were disproven and rescinded):

(1) Christine Blasey Ford.  Kavanaugh's most credible accuser, despite some notable contradictions. Her story is the highest profile, culminating in an extraordinary and emotional day of testimony before the Senate Judiciary Committee.  Her claim about Kavanaugh was serious and deserved to be considered as such.  Setting aside the terrible, undeniably partisan timing of Democratic leaks, Ford's decades-old recollection is matched by no contemporaneous corroboration or evidence.  None of the four alleged witnesses she places at a key party recall anything like it, with several issuing flat denials.  Her close female friend at the time, another named 'witness,' not only failed to corroborate the story, she's since told the New York Times that she does not personally believe Ford's story ("it just didn't make any sense").  She also says she was pressured intensely to alter her stated memory in such a way that would hurt Kavanaugh, a finding confirmed by the FBI.  Ford's own father reportedly supported Kavanaugh's confirmation, suggesting that he also did not believe the allegation.  Ford's attorney recently admitted that abortion jurisprudence was a motivating factor in her client coming forward to point the finger.

(2) Deborah Ramirez.  This is the woman whose story the "new" "bombshell" (see below) was meant to validate.  The former Yale student could not remember if her memory of sexual impropriety actually featured Kavanaugh, but she went public with her accusation anyway, having "carefully assessed" her recollections with liberal lawyers (who played games with Senate investigators) for a few days, decades after the claimed incident.  In the days leading up to her public allegation, she called former classmates, expressing doubts about what happened and admitting she wasn't sure Kavanaugh was involved.  All of the named eyewitnesses deny the story.  Extensive reporting could not even nail down whether Kavanaugh was present at all.  The only "corroboration" was a thirdhand rumor, the source of which was eventually tracked down, and had no memory of any of it.  This is not a credible allegation. There is literally zero evidence backing it up.

(3) Julie Swetnick.  The insane claims of serial gang rape were good enough for Senate Judiciary Committee Democrats and Chuck Schumer to call on Kavanaugh to withdraw, but Swetnick's story rapidly and totally unraveled.  She backed away from her own explosive claims, and even NBC News couldn't bring itself to pretend she might be telling the truth.  This episode was a comprehensively-discrediting and revealing humiliation for those who reflexively bought into it.

(4) Unnamed woman from Colorado.  Anonymity all the way around, yet based on the details and time frame, the female 'victim' about whom the allegation was made stepped forward and adamantly denied the charge ("offensive and absurd"), defending Kavanaugh's honor ("always treated me with the utmost respect").

(5) Unnamed woman at Yale. This is the aforementioned "new" one, which Senate Democrats chose not to pursue last year, despite being aware of it.  It's based on an alleged memory from a Clinton-connected male lawyer, involving an episode that the alleged victim herself does not remember.  This is the accusation that has prompted numerous calls for Kavanaugh's impeachment from the Court.  A secondhand recollection from decades ago, featuring zero evidence -- with a female 'victim' who doesn't remember it happening.

Evidence matters.  Any politician parlaying these unproven or discredited claims into an impeachment demand is a shameless, dangerous demagogue.  There should be repercussions for such obscene recklessness.  As for the media's role in this, at least the mask is fully off:

Hot take: As the media becomes more culturally and demographically adjacent to the Democratic base (e.g. because both the media and the D base are urban and college-educated), the GOP base will appear more exotic to it, which will tend to lead the media to overrate its potency.

Theory: The median journalist is to the left of the median Democrat.

You know how NYT added editor's note saying Brett Kavanaugh alleged victim is said not to recall new alleged incident from 35 years ago? Times again leaves that out of new piece, this one about Dem calls for impeachment. https://t.co/Oo7fFW1AsG pic.twitter.com/HOxSycIMsR