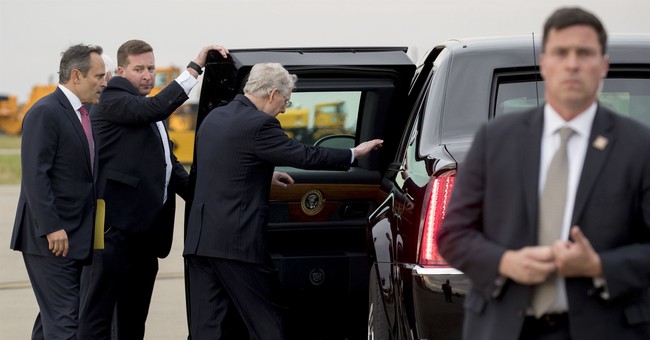 Somewhat lost in the din of grief and blame over the last 48 hours were health-related announcements from Kentucky's two US Senators.  Majority Leader Mitch McConnell tripped and fell at his home and seriously injured his shoulder over the weekend, according to a statement released by his office.  Here are the limited details we have so far:

Mitch McConnell tripped at home and fractured his shoulder, according to his office. Here's to a speedy recovery, Senator. pic.twitter.com/usR6J9YmM6

Disgustingly, but not surprisingly, this development touched off a whirlwind of online glee and conspiratorial lunacy from leftists who hate McConnell.  Just read the replies to this tweet, if you have the stomach for it.  It's unclear whether McConnell's stumble and injury was at all related to the lingering effects of polio, from which he suffered as a child.  That condition has also been the source of nasty attacks and mockery from political opponents in the past.  Meanwhile, Sen. Rand Paul has revealed that he is undergoing a surgery to remove part of his lung, made necessary by trauma from a physical assault at the hands of his left-wing neighbor.  In case the seriousness of that attack wasn't already clear, this leaves no doubt:

Unfortunately, I will have to limit my August activities. Part of my lung damaged by the 2017 assault had to be removed by surgery this weekend. The doctors, nurses, & staff at Vanderbilt University Medical Center were great. I should be able to return to the Senate in September

The responses to this tweet also serve as a reminder that "baskets of deplorables" are thriving in both major partisan camps these days.  Speaking of which, in late July, Rep. Ilhan Omar -- who regularly claims that criticism of her amounts to "incitement," in addition to framing it as bigotry -- retweeted a comment from a washed-up actor ridiculing Paul and voicing support for the neighbor who assaulted him.  Does this represent "incitement," too?  What about the "concentration camps" language employed by the Squad, which was echoed by an Antifa terrorist who launched an armed attack against an ICE facility in Washington State?  Should leftist politicians admired by the Dayton mass shooter be held accountable for their hyperbolic and apocalyptic rhetoric, which -- according to the standard line among Democrats -- may have contributed toward a "culture of hate" and hyper-partisan "otherizing"?

It's difficult to keep track of the rules these days, as they never quite seem to apply consistently.  Meanwhile, here's CNN attempting to shame Republicans for declining to appear on their air in the aftermath of horrendous acts of gun violence:

Gosh, I wonder if this shameful episode did anything to inform these elected officials' decisions on this front, considering that many of them are granting interviews to other outlets?  I'll leave you with this parting question:

What’s worse, offering thoughts and prayers after a tragedy, or fundraising off it?

Just now in my inbox from @KamalaHarris pic.twitter.com/2AurWxPHru

just some casual death wishes outside the Senator’s home https://t.co/vJTdWROJIh