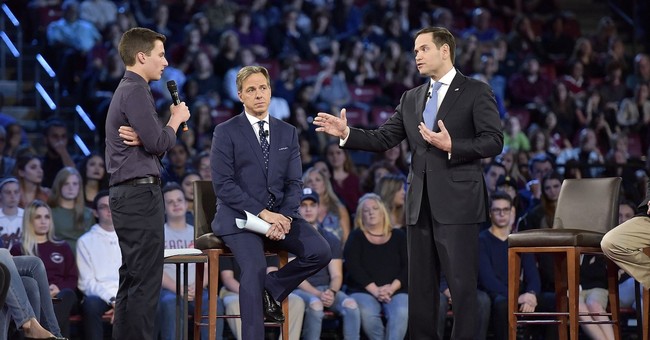 At CNN's special 'town hall meeting' event last night, the designated villains were pro-gun rights advocates like Sen. Marco Rubio and NRA spokeswoman Dana Loesch (a friend of mine who I think comported herself rather well in Florida under difficult circumstances, then undercut her message today with comments like this).  The tone and content of many of the questions, and the range of reactions from the stacked and emotional audience, painted Second Amendment supporters as unfeeling, heartless monsters who are complicit in mass murder and paid off by special interests not to care about innocent lives.  Here is a prime example of an ugly, deliberately-planned shot taken by a newly-created demagogue:

“Senator Rubio, it's hard to look at you and not look down the barrel on an AR-15 and not look at Nikolas Cruz” https://t.co/moTuJakOOW

This kid has every right to channel his despair and rage into activism, and people who smear him and his like-minded peers are grotesquely off-base.  That doesn't make his gratuitous insult here any less contemptible, on the merits.  Maybe he'll come to regret hurling it one day.  As I wrote shortly after a deranged leftist extremist attempted to massacre Congressional Republicans on a baseball field last year, blaming anyone other than the gunman for what happened represented a cheap and unfair effort to score political points.  "Rhetoric" was not to blame.  Bernie Sanders, whom the shooter ardently supported, was not to blame.  The gun was not to blame.  The exact same standard should apply to Parkland.  The fault for that catastrophe lies with the evil and disturbed perpetrator, not with America's many millions of law-abiding gun owners, nor the people who defend our citizenry's fundamental constitutional right to bear arms.  I fully understand the frustration pro-gun control forces harbor for political actors whom they view as impediments to needed reforms.  Some (but not all) of that partisan frustration is misguided, in my view, and sometimes acts as a lazy substitute for thinking through harsh realities that don't fit into an easy box.  But channeling anger at politicians who stand in the way of one's desired outcome makes intuitive sense.

Nevertheless, treating the other side in a policy debate as pro-death enemies doesn't seem like a pragmatic way to sway hearts and minds -- an insight that also applies to some pro-life arguments on abortion, another issue on which tensions run high, and on which media bias is uniquely excruciating.  In any case, I wanted to highlight this exchange from last evening's event, which many on the Left celebrated:

Rubio scores an own goal when he says the assault weapons ban "would literally ban every semi-automatic rifle that's sold in America" and the crowd erupts in cheers pic.twitter.com/VfIqxCloyo

Rubio was asked about reimposing the so-called "assault weapons" ban, the repeal of which did not lead to an increase in gun crime (just the opposite, in fact).  His answer explained why, in actual practice, such a law would not work -- and how in order to have the desired effect, the government would need to ban every semi-automatic rifle in America.  Most of the crowd burst into cheers.  This was hailed as a powerful anti-gun moment and an embarrassment for Rubio, but it was neither.  Whenever we debate gun control as a nation, most of the Left (some people are more explicitly honest about their intentions) insists that it's fear-driven paranoia that leads 'bitter clingers' to believe that the government is going to outlaw their guns.  We're not coming to ban your guns, they say.  We just want to implement a few 'common sense' restrictions like universal background checks (which already apply to the overwhelming majority of gun purchases).  Gun owners and Second Amendment adherents are instinctively skeptical and suspicious of this line.

Then we see a Republican Senator pointing out on national television that the real-world effect of a major gun control proposal would entail flat-out outlawing a huge (and growing) percent of rifles...and thousands of anti-gun activists respond by applauding heartily.  What visceral lesson might pro-gun rights alleged 'paranoiacs' draw from this display?  Perhaps they'll conclude that their ideological opponents are, in fact, eager to grab and ban guns, and that their smooth, incrementalist talking points are meant to deceive through disingenuous assurances of restraint.  Duly noted, a gun owner might think to herself after watching the Rubio clip.  We cannot give these people an inch.  In other words, that video snippet will resonate with millions, just not in the way many in the media would expect or hope.  A number of conservatives share my instinct on this:

This is apparently the point at which journalists watching the event start to convince themselves that this crowd is reflective of the average American voter and that Rubio’s positions are broadly unpopular in Florida and beyond. https://t.co/T3QrV8oX8f

I can't remember a piece of media that so explicitly exemplifies all the worst fears pro-gun forces agitate against. That clip is going to be run on a loop for the next three years.

That’s not an own goal, it’s an image that millions upon millions of law-abiding gun-owners will see and rightly react against. Those are cheers for the revocation of a civil liberty that’s essential to our constitutional republic. https://t.co/8uErGRDCd6

Rubio himself also responded on Twitter, writing: "Banning all semi-auto weapons may have been popular with the audience at #CNNTownHall, but it is a position well outside the mainstream."  He's correct, and I suspect that many of the people to clap along to the notion of barring semi-automatic weapons don't even know what that term means, and what the resulting policy implications would be.  But gun rights supporters certainly do. I'll leave you with a thought about channeling and processing grief in a healthy way, and a challenge to Congressional Democrats, based on the thunderous applause in the venue last night:

Putting aside politics & policy, minors who have been through this much trauma should be talking to mental health professionals at least as much as they are to anchors & reporters. This kind of grief is not to be trifled with.

Okay Dems, you heard the cheers of the crowd. Time to introduce a full semi-automatic ban bill.