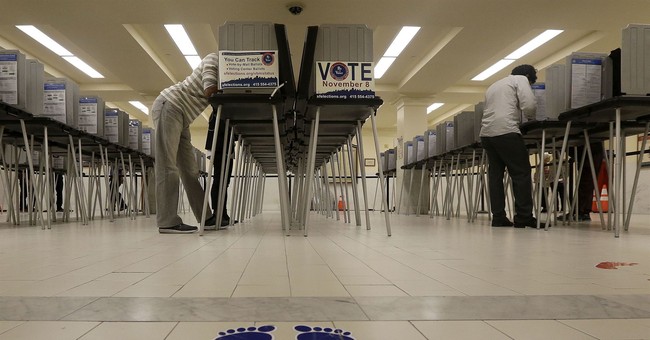 As we assessed the political tea leaves ahead of the 2018 midterm elections, we tracked the results of off-year and special elections as potentially-instructive barometers of public sentiment.  Our ultimate conclusion was that an anti-Trump wave was likely building, with energy and enthusiasm shooting through the roof on the Left.  The Kavanaugh fiasco clearly helped rally conservative intensity, and almost certainly served as a primary factor in the GOP's Senate success.  But on balance, we predicted that last November would feature a very good night for Democrats.  We estimated that the opposition party would net around 40 House seats and half-a-dozen governorships, while Republicans would hold onto the Senate.  All of these informed guesses turned out to be spot-on.

Now that all eyes have turned to 2020, what should we be looking for?  The president's job approval numbers are mediocre, though his handling of the economy is a clear and crucial bright spot.  Democrats' radicalism on certain issues appears to have triggered some degree of backlash -- but drawing any conclusions at this early stage is foolish.  Huge X-factors regarding the president's re-election chances, like who the Democrats nominate and the future status of the US economy, are impossible to know at this stage.   We'll perhaps learn more about voters' mood when Virginia's off-year legislative elections occur this fall (will the state leadership's racism scandals, alleged sexual assault, and abortion extremism help Republicans in this increasingly blue-tinted battleground, or will anti-Trumpism again carry the day?), but for now, all we have are bread crumbs.  And a few 2019 bread crumbs suggest that the partisan pendulum may be swinging back toward the GOP in some places.  Here's a bit of news out of Kentucky, where Democrats are again planning to spend big money to defeat Mitch McConnell next year:

Sure, that happened in a deep red state, but as the tweet notes, this was not only a long-held Democratic district -- it was a seat that had been occupied by a member of Democratic leadership.  The GOP has now hit its all-time high water mark in that state's upper chamber, with Democrats down to single digits in the 38-seat body.  And as a Republican operative points out, 2019 party gains have not been limited to Kentucky:

This is now the 4th state legislative seat Republicans have flipped since the start of the year, including in purple (MN), blue (CT), and red (KY) states. https://t.co/1WCi094bar

Let's review the other gains.  In Minnesota last month, a conservative Republican won an open state senate seat that had been held by Democrats "for decades," according to the Minneapolis Star Tribune:

Republican Jason Rarick won a hotly contested special election for an east-central Minnesota state Senate seat Tuesday, flipping a district long held by Democrats to give his party more power in the state Legislature. Rarick, a state representative from Pine City, defeated Democrat Stu Lourey 52 percent to 46 percent in the 11th Senate District. John Birrenbach of the Legal Marijuana Now Party captured about 2 percent of the vote. Rarick succeeds former state Sen. Tony Lourey, D-Kerrick, who resigned to take a job as Gov. Tim Walz’s Human Services commissioner...The win means Republicans will expand their narrow majority in the state Senate by one vote. The new 35-32 split may make it more difficult for Walz and Democrats in control of the state House to pass proposals this session key to their agenda, including bills related to guns, health care and a gas tax. Republicans celebrated the shift in power late Tuesday.

And in deep blue Connecticut, the GOP scored a pair of special election victories, flipping two Democrat-controlled seats -- including one in a district that Hillary Clinton won in a landslide in the last presidential cycle:

Republican candidates in Connecticut flipped two state legislative seats in a five-race special election held Tuesday. Gennaro Bizzarro pulled off the biggest upset of the night. He defeated Democratic Rep. Rick Lopes in the 6th District Senate race with 53 percent of the vote, the CT Mirror reports. The seat was vacated after the incumbent was appointed to a state role by newly elected Democratic Gov. Ned Lamont’s administration...Democratic presidential candidate Hillary Clinton won by more than 23 percent in the 2016 presidential election in the same New Britain district that Bizzarro flipped. Bizzarro told supporters after the election that the race was a “referendum on taxes and tolls.”

Despite an undeniable "blue wave" at the federal and gubernatorial levels last year (the Senate map and conditions were uniquely suited to help protect and build McConnell's majority), the Republican State Leadership Committee noted that Democrats' gains in state legislatures were really quite limited. That's especially true when compared with the monster red wave year of 2010, when voters crushed President Obama's party at the polls:

“After two years of overstated predictions from a newly created constellation of progressive groups pledging to spend hundreds of millions, Democrats only managed to flip five net chambers—all in blue states won by Hillary Clinton. The Republican state legislative red firewall held strong in battleground states like Florida, Iowa, Michigan, North Carolina, Ohio, Pennsylvania, and Wisconsin. Vastly outspent by former President Obama, former AG Holder, and billionaire megadonors like Soros, Steyer and others, the RSLC helped preserve nearly all the historic gains of the past decade, protect critical majorities, and even flipped nearly 100 Democrat seats to Republican (and counting)...Democrat net seat gains from the 2018 Election are a small fraction of what the RSLC’s RedMap program accomplished during the 2010 Election and well below any comparable wave measurement. Compared to the 21 chambers Republicans flipped in 2010- the most recent comparable midterm- Democrats fumbled the opportunity to make significant gains toward recouping the nearly 1,000 seats they lost since then."

Democrats netted just over 300 seats in 2018, which isn't anything to sneeze at. But as a point of reference, Republicans netted 724 seats in Obama's first midterm cycle, reversing control of 21 chambers in one fell swoop.  It would be silly to read too much into four flipped state legislative seats in low-turnout special elections, and any restored sense of security among Republicans would be foolishly premature.  But these data points are at least interesting to keep track of, especially if more evidence emerges of voters reversing their heavily Democratic tilt from last year.  Even if that pattern does continue over the next year-and-a-half, it's quite difficult to tell how that might impact the high-turnout and -intensity presidential race, in which the Left will undoubtedly be extremely motivated to defeat the incumbent.

Parting thought: Do you think this episode may have swayed some voters down in Kentucky this week?