Prediction Time: Will the 'Blue Wave' Crash Down on Republicans, or Fizzle? 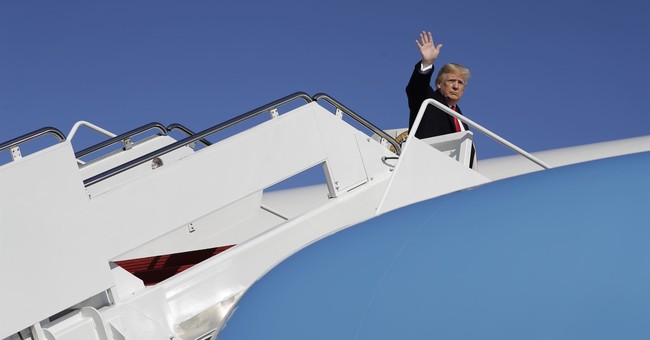 Yesterday, I gave you my reasons for supporting Republican candidates in this contested midterm cycle.  Now it's time for some predictions -- which are independent of my personal ideological or partisan preferences.  Polling is all over the place, with a number of keen observers breaking down close races into disparate "two Americas" categories: Suburban, educated districts leaning blue this year, versus blue collar and rural districts breaking for the president and his party.  As we've recently outlined, Trump's job approval is in relatively stable shape nationwide, clearly boosted by strong loyalty in heavily 'Trumpy' districts (which are not necessarily synonymous with historically Republican districts).  The GOP leads comfortably on the economy, while Democrats have a strong advantage on healthcare.  Those are the two biggest issues cited by voters as driving their electoral choices this year.

At RealClearPolitics, Sean Trende helps elucidate why the data is so tricky to interpret in 2018, sketching out a rosy scenario for Republicans, followed by an ugly one.  GOP pollster Kristen Soltis Anderson looks at the same information and wonders whether the Democrats are heading for a wave -- or a "wimper:"

Had the midterm elections been held one year ago, it would have been a disaster for Republicans...the numbers were on track to be 2006-level-ugly, where despite low unemployment, the president had job approval numbers in the mid-to-high 30s and the generic ballot favored Democrats by double digits. If nothing changed, it was going to be a nightmare for the GOP. And then … it wasn’t...In a wave election, two things seem to happen: Independents break heavily for one party, and that party’s voters are much more enthused about turning out than the other party’s. In 2006, Democrats won over independent voters by 18 points, and voters who planned to support Democrats were nine points more likely to report being enthusiastic about voting. In 2010, it was the opposite; independents favored Republicans by 19 points, and voters who supported Republican candidates were 15 points more enthusiastic in Pew’s polling. Today? Independents favor Democrats on the generic ballot, but by smaller margins than they did in 2006. Furthermore, while interest in voting is way, way up among Democratic voters, the Pew study showed a nearly corresponding spike among Republicans, which additional data suggests brought Republicans to parity post-Kavanaugh confirmation.

She concludes: "At least for now, the indicators suggest a shift far less dramatic than the 63 seats Republicans picked up in the 2010 wave."  That's not exactly a ringing endorsement of the GOP's chances, as a 63-seat loss is enormous, but it suggests that the party may be able fend of the type of tsunami that looked likely a year ago.  All that being said, having followed the polls very closely for months, as well as tracking actual electoral results during the Trump era, I foresee a pretty good night for Democrats shaping up.  (For reference, bear in mind that I was largely wrong about the 2016 election, was too optimistic about Mitt Romney's chances in 2012, and more or less correctly anticipated the lopsided wave years of 2006, 2008, 2010, and 2014).  Why do I say that?

(1) History is on the 'out' party's side; all Democrats have to do is perform up to the historical average heading into the first midterm election of a new president's term, and that would be good enough to win THE HOUSE. (2) Even though Republicans held on to win eight of nine special House elections in 2017 and 2018, they were mostly defending safe territory, and Democrats' intensity and momentum led to a string of heart-pounding nail-biters.  The trends in the actual outcomes -- not polls, not predictions --  have cut against the GOP.  (3) In wave, or wave-ish, years, we often see a cascade effect, wherein the large majority of tossup races break in the same direction.  Democrats are far better situated to have that effect redound to their benefit this cycle, based on swing district polling, national atmospherics, certain late-breaking statewide races in bellwether states -- and just my gut instinct, for what it's worth.  I hope I'm wrong, but I'd guess Democrats will gain somewhere in the neighborhood of 40 House seats tonight.  By the way, as of Monday evening, RCP's tracker only gave Democrats a 10-seat lead over Republicans, with 43 toss-ups.  The path to a Democratic House majority is quite easy to chart, based on those numbers.  A giant Democratic blowout is tougher to envision, but not impossible.

Over in THE SENATE, several of the most important races are being hosted in states where President is fairly, or very, popular.  Some of the key polling hasn't shown any 'cascade' effect, resulting in absolutely plausible scenarios under which either the GOP would lose a net seat, or would gain up to five seats:

With the last few days of polls, Republicans still look pretty safe holding the Senate at no worse than D+1, but the next six races could all be close losses...

...and if the polls are off by not that much, we could have 56 Republican Senators. pic.twitter.com/YgOYmHdmAy

Don't forget how badly the polls missed the scope of the Republican wave of 2014, in which the party netted nine Senate seats:

Those survey averages seriously whiffed on a group of Senate Republican nominees' margins, some well outside the margin of error.  This could mean that the GOP is in better shape than the public polling would suggest; it could also mean that Democrats' national advantage is being majorly underestimated.  In short, I'm not sure the data in that tweet above should be especially comforting to either party.  Based on my pessimism-shaded expectations for this cycle, I predict Republicans will either break even or gain one net Senate seat, with the GOP's likeliest band of results falling between 50 and 52 seats.  We may end up exactly where we started.  I'd be more surprised by Democrats taking over the upper chamber than by Republicans hitting 54 or 55 seats, but not by much.  My best sources have both pointed to a considerable tightening in the last two weeks, stressing that half-a-dozen Senate races are toss-ups as election day arrives.  Keep in mind that if things are very close, control of the Senate could conceivably boil down to a run-off election in Mississippi, where conservative voters are currently splitting their support between two GOP candidates.

Finally, the GOP has been dominant in state-level races in recent years, winning control of two-thirds of all GOVERNORSHIPS.  It is virtually certain that Democrats will cut into that Republican stranglehold tonight, perhaps even drawing approximately even.  Look at the races that are in the toss-up category, and Democrats clearly have an edge in terms of pick-up opportunities.  Republicans could do themselves a lot of good by gaining governorships in Alaska and Connecticut, but most of the other serious targets are currently GOP-held.  Look for Democrats to flip half-a-dozen governorships or so; if it's a really good night, they could actually take a narrow lead on the national 'gubernatorial control' map, which would be quite a feat, considering that Republicans are coming in with a strong (effective) 33/17 advantage.  Governorships have large implications on budgets, taxes, social issues, state-level judiciaries, and reapportionment.  Republicans' gigantic 2010 wave helped them control the redistricting process in a string of crucial states; Democrats are hoping to flip that script after this cycle.

I'll leave you with poll closing times from coast to coast, plus this analysis of battleground races that will give us a pretty good sense of how the overall night will unfold:

It's here! The biennial @DKElections poll closing times map is back!

The map you see here is in Eastern time, but we have versions for every U.S. timezone at the link: https://t.co/pG5ZKMKJz6 pic.twitter.com/zCxgzjTNVQ

And one more repetition of the message I imparted yesterday: The only way to actually impact how these races turn out at this point is to vote today.