It's Beginning to Look a Lot Like...Speaker Pelosi 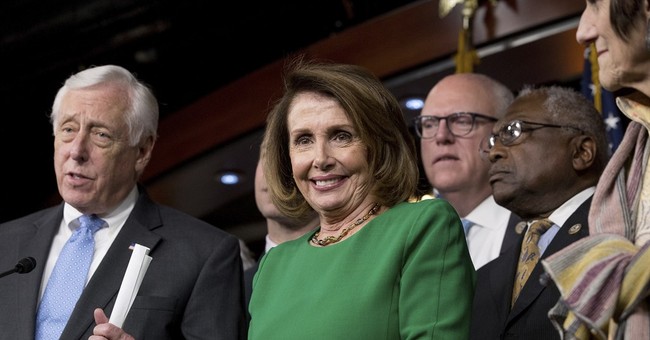 As we approach Thanksgiving, national Republicans have three things to be thankful for: An expanded Senate majority, a robust US economy, and the increasingly likely return of a very special lady to the House Speakership.  Don't get me wrong, Nancy Pelosi is a notoriously ruthless leader who is an excellent vote-counter, so her effectiveness is often an asset to Democrats -- but she's also deeply polarizing and quite unpopular.  Dozens of House Democratic candidates across the country explicitly campaigned against Pelosi, pledging to vote against her bid to lead the party in the new Congress.  Many of them won.  And now the anti-Pelosi ranks are dwindling:

On Monday, 17 House Democrats pledged to vote against House Minority Leader Nancy Pelosi, D-Calif., for speaker of the House as Democrats retake the majority in January 2019. Some notable members include Reps. Tim Ryan, D-Ohio, Marcia Fudge, D-Ohio, and Linda Sanchez, D-Calif. According to reports, two more members could be signing on to the anti-Pelosi letter.  More notable may be the Democrats who didn't sign the letter, even though they promised on the campaign trail that they would oppose her for speaker. Back in early August, however, NBC News compiled a list of Democratic candidates — both nominees and incumbents — who opposed Pelosi leading the party should the Democrats retake control of the House. By my count, 12 Democrats who won their respective races were listed as opposing Pelosi during the campaign, but did not attach their name to the letter.

Click through to read the list.  In any case, that letter was sent on Monday.  Since then, one of the most conspicuous signers of the missive has back-flipped and endorsed Pelosi.  Marcia Fudge was testing the waters to challenge Pelosi, and then came the one-two punch of an ugly oppo drop and a backroom deal:

We have found a letter of support from @RepMarciaFudge during the 2015 sentencing of Judge Lance Mason after the severe beating of his wife Aisha Fraser. Mason is now the lead suspect in the weekend murder of Fraser. @cleveland19news pic.twitter.com/6Yzgw2gkkD

And voila, she's now on board:

NEWS: FUDGE drops out of speaker mix, says in stmt she won't challenge Pelosi... and throws her support behind Pelosi, too

The pro-Pelosi writing was on the wall last week, when an explosion of lefty commentary emerged casting opposition to her leadership as sexist and ageist. The liberal commentariat was perfectly content to allow swing voters to believe Pelosi was on the ropes when electoral outcomes were still in play, but once it became clear that Democrats had won the House, and that Pelosi was consolidating support, the wagons circled. The absurdity of the "sexism" charges was exposed in this 'instant fact-check'-style exchange:

Boehner had to fight off multiple challenges to his speakership. McConnell survived a well-funded attempt to oust him in Kentucky. The base shivved Cantor in a primary. https://t.co/iKw0mtyADb

This is very recent history, people. Try harder.  Meanwhile, Pelosi says she'll have the votes to be Speaker.  The Washington Post is tracking the whip count, and she's not officially there yet, but there are an awful lot of House Democrats who are dodging questions on the subject.  As various alternatives melt away, it looks more and more like Pelosi will once again wield the gavel next year.  And guess what?  In spite of all the talk directed at purple and red district voters about "new leadership," partisan Democrats want Pelosi:

It appears Democratic voters may well get their wish.