Hope and Change: With More Votes Counted, It Looks Like Mia Love May Have Won in Utah After All (Update: Dems Caught Cheating in FL-Sen?) 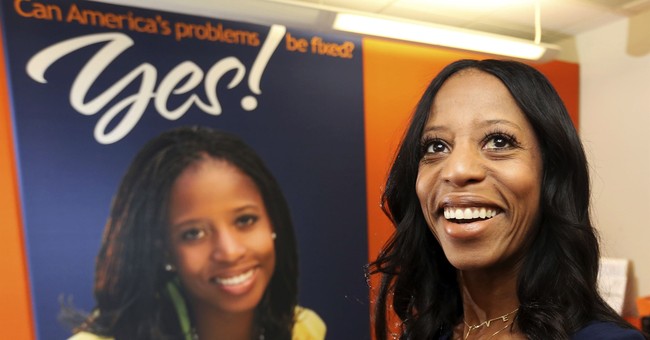 Let's start things off with the good news: On election night, it looked like conservative Utah Congresswoman Mia Love, who represents Utah's least Republican Congressional district, had been swept away in Democrats' suburban blue wave.  But as more votes have been counted, Love's Democratic challenger has seen his lead dwindle away -- and now electoral maven Dave Wasserman is starting to lean toward the conclusion that Love is slightly favored to complete the comeback and win another term:

Despite President Trump's gratuitous shots at Love during these unhelpful remarks last week, Congressional Republicans would be delighted to have their party's only black female Representative return to the lower chamber in January.  Keep an eye on this race -- it's trending red.  At the other end of the spectrum, California's notoriously endless vote-counting process is once again padding Democrats' numbers, likely handing defeats to a number of Republican candidates who were leading on election night.  The imperiled or defeated include incumbent Mimi Walters and first-time federal candidate Young Kim, who stood to become the first Korean-American woman ever elected to Congress (I mentioned her in this post).  Given the trajectory of the count, in which she appeared to lead somewhat comfortably last Tuesday night, Kim may well narrowly lose:

Breaking: Orange Co. update drops Young Kim (R)'s lead over Gil Cisneros (D) from 590 votes to just *122* votes. It's only a matter of time until Cisneros overtakes her. https://t.co/9tHE4GGqdT

It's now virtually certain that Orange County, CA will be represented by zero Republicans in Congress in 2019. And, all of NJ will have only one.

Republicans really got hammered in coastal blue states.  Orange County was long a Republican bastion in California.  It's incredible that the party may be shut out in its Congressional delegation hailing from that county.  Here's where the uncalled contests currently stand, or at least lean:

If the finalized outcomes break down as Wasserman projects, Democrats' net gain of House seats would land at 38.  As for the Senate, only Florida is still outstanding, and Republican Rick Scott remains in good shape -- despite more shadiness, questionable practices, and incompetence/derelictions in Democratic counties.  I'll leave you with Jeb Bush urging defeated incumbent Sen. Bill Nelson to stop dragging out the pain:

Nelson will likely come up short in recount battle against Scott via @POLITICO for iOS. Senator NELSON, please stop the lawsuits, let the votes be accounted according to Florida law and accept the results. Don’t tarnish your years of service to Florida. pic.twitter.com/ymKoskQzCr

As we've learned, Democrats baselessly alleging "fraud" or "stolen" elections over outcomes they dislike is generally met with yawns from our self-righteous, ostensible guardians of institutions.  When Republicans do anything similar, even with some basis, they're raked over the coals by the press.  Much of the national media is an active element of the Democratic echo chamber, earning much the distrust and scorn they receive.  If and when Scott is declared the official winner, Republicans' Senate majority will stand at 53-47.

UPDATE - Wow, this has the markings of a potentially grave voter fraud scandal in Florida:

This is a really bad look

“Florida Democrats were organizing a broader statewide effort beyond those counties to give voters the altered forms to fix improper absentee ballots” https://t.co/2AynLYNfSk