'Year of the Woman,' Republican Edition 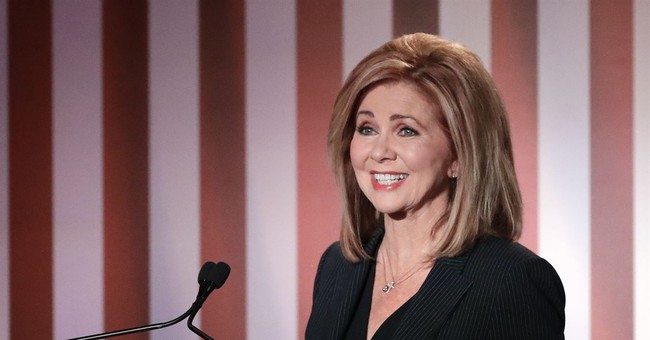 Much has been made of 2018's "year of the woman" status, as Democrats carried female voters by 19 points last night, exploiting a (+15) gender gap to win back the House and pick up a number of governorships.  Democrats have also crowed, loudly and often, about the number of women they had on the ballot -- many of whom won last night.  While stiff historical headwinds were blowing in Republicans' faces, the opposition correctly read the political needs of the moment and recruited an array of strong female candidates who were primed to exploit widespread suburban dissatisfaction with the president.  Democrats won the national election (despite important setbacks in the US Senate) because of women candidates and women voters.  But it's also important to note that the "year of the woman" featured some Republicans who made history, as well:

(1) Kim Reynolds became the first woman in Iowa history to be elected governor.

(3) Marsha Blackburn became the first female US Senator from Tennessee.

(4) Martha McSally currently appears poised to become the first female US Senator from Arizona, pending finalized results.  If she hangs on (lots of ballots are reportedly outstanding), McSally is no stranger to firsts:

As she attends Air War College here, the first female pilot in the Department of Defense to fly in combat reflected on some of her career experiences so far.  An A-10 Thunderbolt II pilot, Lt. Col. Martha McSally is also the first female in the Air Force to serve as the commander of any combat aviation squadron, to include fighters and bombers. "The first role of women as military flyers was during World War II as Women Airforce Service Pilots, an organization disbanded after the war," Colonel McSally said. "When women resumed flying in the Air Force, a law prohibited them from flying in combat," she said. "In 1984, I was attending the U.S. Air Force Academy and told my first flight instructor that I was going to be a fighter pilot. He just laughed, but after Congress repealed the prohibition law in 1991, and I was named as one of seven women who would be put through fighter training, he looked me up and said he was amazed I had accomplished my goal." ... In July 2004, she took command of the 354th Fighter Squadron at Davis-Monthan Air Force Base, Ariz. -- becoming the first woman to command a fighter squadron.

(5) Cindy Hyde-Smith won a plurality in Mississippi and is heavily favored to win her runoff election to become the first woman ever elected to the US Senate from her state.

She ran alongside Republican Rep. Ron DeSantis, who beat Democrat Andrew Gillum in a high profile race that was one of the most closely watched nationally.  Nuñez, "when she takes office, will be the highest ranking Hispanic female in the history of the state of Florida," DeSantis said during his victory speech on Tuesday night. Nuñez, 47, told NBC News during the closing days of the campaign that being chosen as Lieutenant Governor is “a huge source of pride for me, for my family, but most importantly for my community.” ...She was born and raised in Miami to Cuban parents and is currently Speaker Pro Tempore of the Florida House of Representatives.

(7) Young Kim, a California state legislator, appears to have won her hotly-contested US House race, becoming the first Korean-American female elected to Congress:

Our country has a bright future but we need reps that will put aside their differences & work to move our country forward. As your rep I will work in an independent manner to fix Washington gridlock & get results that improve our communities. I would be honored to have your vote. pic.twitter.com/KpnNBT85XG

(8) Cathy McMorris Rodgers, the highest ranking Republican woman in Congress, comfortably won re-election last night.  I include this development only because Democrats and the media were excited that she might be vulnerable.  As of this writing, she leads the count in her district by 12 points.

Overall, the number of Republican women serving in Congress next term will slightly dip, partially because some female incumbents and candidates lost.  I'll leave you with some hot takes about white women, who voted Republican last night.  Apparently, feminism cannot include independent conservative-leaning thought, and dumping on groups of people based on their sex and skin color is okay under certain circumstances:

There needs to be accountability and an honest reckoning. There’s a lot of work to do, white women. A lot of learning. A lot of growing.

We want to do it with you.
Stay tuned. https://t.co/nN0cFqqmy5