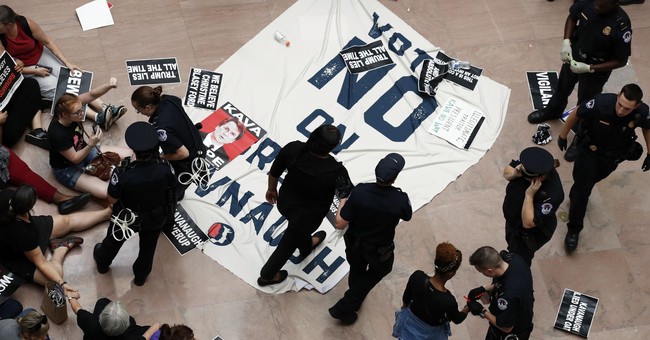 In the wake of the Kavanaugh fight, many Republicans and conservatives used their basic faculties to detect a strong and distinct strain of intimidation tactics within the Left's manifestations of opposition.  We witnessed unhinged disruptions of hearings, violent and sexual threats against Senators, doxxing of elected GOP officials, hoards of agitators charging past police to swarm the Supreme Court, banging on its doors while chanting, and 'activists' hounding elected Republicans out of restaurants.  Elements of the Left were acting like an angry, dangerous mob.  We also saw mainstream political figures within the Democratic Party winking at the mob, from Hillary Clinton, to Eric Holder, to Mazie Hirono -- to say nothing of the more explicit calls for incitement and harassment from Maxine Waters and Cory Booker.

These threats and out-of-bounds "protests" were correctly identified and denounced by Republican leaders. Mitch McConnell gave multiple speeches condemning the mob, with other members chiming in with their stories and warnings.  Colorado Senator Cory Gardner revealed that someone texted gruesome beheading images to his wife's personal cellphone prior to the Kavanaugh vote, and House Majority Whip Steve Scalise -- who was nearly assassinated by a leftist last year -- wrote an op/ed calling on Democrats to more explicitly urge their base to reject irresponsible rhetoric and actions:

As a survivor of a politically motivated attack, it is tragic to think this is an acceptable state of political discourse in our country. I refuse to stand for this and I will continue to call for an end to it. A healthy, strong democracy is not possible if anyone lives in fear of expressing their views. If this is going to stop, it must start with Democratic leaders, who need to condemn, rather than promote these dangerous calls to action. In America, we win battles at the ballot box, not through mob rule or intimidation. While it’s clear many Democrats refuse to accept the election of President Trump, if they want change, they need to convince people with their ideas and actually win elections, rather than call for violent resistance, harassment, and mob rule. As I see, working in Congress every day, it’s possible to agree without being disagreeable and address political differences in a civil manner. That’s an example leaders need to continue to set.

Rand Paul was also mocked for publicly worrying that someone might get killed in this atmosphere, as if he hadn't been assaulted on his own property, and hadn't been on the same baseball field as Scalise.  I've long argued that heated political rhetoric that falls short of direct incitement is not responsible for violence; the Left often tries to link conservative speech to lunatics' acts of aggression as a means to silence conservative speech.  But there is a difference between speech and action, as David French explains:

There is a yawning legal and moral gap between First Amendment–protected activity, no matter how angry and boisterous, and a true mob. Screaming protesters picketing on a sidewalk are in a fundamentally different position from screaming protesters who invade private property to chase a senator from his meal. Angry demonstrators chanting in front of the Supreme Court are different from people who break police cordons and pound on its doors. Handmaids silently mourning the birth of Gilead are not the same as men and women who disrupt Senate hearings and votes. Legally protected protest is safe. It’s consistent with the best traditions of American dissent. It’s truly what “democracy looks like.” Mob action, by contrast, is dangerous. It creates imminent risk of personal harm. It’s designed to frighten and intimidate. There is no place for the mob in a constitutional republic...It’s time for Democrats — and members of the media — to dial back the rhetoric. It’s time to stop excusing, rationalizing, and minimizing behavior that is dangerous, menacing, and threatening...Dissent, yes. Mobs, no.

I also recall the wild opprobrium heaped upon the Tea Party movement by the mainstream media and their friends in the Democratic Party, who repeatedly dismissed conservative demonstrators as a frightening mob. Noah Rothman did some basic googling and turned up numerous examples of this narrative.  And contrary to liberal lore, the tiny number of alleged incidents of 'Tea Party violence,' most were instigated and perpetrated by leftists.  Yelling at a town hall meeting is not the same as swarming offices, phoning in threats, or running past security to pound on doors.  But the memo evidently went out within elite media circles to excoriate Republicans for correctly identifying mob behavior as such.  CNN anchors scolded and berated conservative commentators for using the term.  A round of predictable "conservatives seize" stories were published.  And sneering lefty journalists tsk-tsk'd Scalise, of all people, for expressing concerns about the opposition party's contributions to the hyper-charged atmosphere:

Stop noticing things, you awful conservatives.  The only mobs are formed by you and your ilk, and to say otherwise -- no matter the evidence in front of our eyes -- is fear-mongering.  Look, of course conservative-leaning people do and say horrible things.  Of course President Trump doesn't have a leg to stand on in complaining about civility in our discourse.  And of course not all, or even most, of the liberal protests against Kavanaugh crossed any lines.  There's plenty of blame and hypocrisy to go around.  But over the last few weeks, the obvious and indisputable preponderance of outrageous behavior has occurred on the Left, and too many Democrats have either been silent, dismissed the conduct, or actively egged it on.  The Free Beacon produced an amusing and maddening mashup of the left-wing mob in action, interspersed with clips of of our biased media schoolmarms whining about conservatives using the word 'mob:'

As usual, the true villains are on the Right.  Always and forever.  And when the blame can't be directly pinned on conservatives, we're accused of 'pouncing' and overreach.  It's so tiresome.  I'll leave you with a new NRSC ad tying the Democrats' Senate nominee in Tennessee to the poisonous environment: