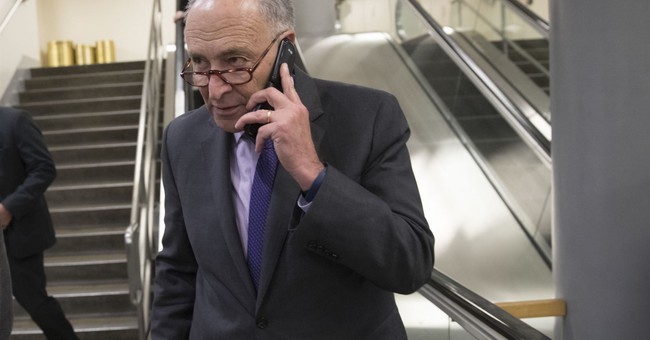 Brian Fallon is a former top spokesman for Hillary Clinton's failed presidential campaign, a confidante to Sen. Chuck Schumer, and an-ex senior official in Eric Holder's Justice Department.  He's also now the public face of a left-wing group devoted to defeating President Trump's judicial nominees, with the most urgent priority being doing whatever is necessary to prevent Republicans from filling the current Supreme Court vacancy.  In an interview with the New York Times, Fallon unambiguously admits what the Brett Kavanaugh destruction project is part of a high-stakes, two-step strategy to thwart Trump -- via a former aide to Mitch McConnell:

I guess it's all out in the open now. pic.twitter.com/FRSk76rgCY

That quote comes from a Times piece entitled, "The Democratic Dream: Defeat Kavanaugh, Win the Senate and Stop Trump Supreme Court Picks."  This effectively echoes the posture adopted by a Senate Judiciary Committee member, who recently fantasized -- out loud -- about derailing Kavanaugh and holding Kennedy's seat open for two years.  That same member has also said that Kavanaugh's judicial conservatism makes him more likely to be a sexual assailant in her mind, and that the accused has the burden of proof in this case.  Appallingly, she hasn't been the only Senator on that panel to endorse that outrageous standard:

.@NoahCRothman to Blumenthal: Do you agree w/ Hirono that Kavanaugh doesn't deserve presumption of innocence?@SenBlumenthal: Yes, the "burden" is on the White House to disprove his guilt pic.twitter.com/gvFv22vH6G

It is downright frightening that multiple United States Senators, who've supposedly been specifically chosen to sit on this influential committee due to their legal acumen, are saying that a man accused of sexual misconduct more than three decades ago -- with no firsthand corroboration whatsoever, and one accuser who's admitted in the last week that isn't even sure he's the guy -- is responsible for disproving the thin, unsubstantiated claims against him.  It's an impossible standard that presents a totally unjust burden of proof in any setting.  These Senators would never, ever accept any such thing for themselves, for anyone they love, or for a political ally.  But so long as this (frankly un-American) demand, that flies in the face of centuries of Western jurisprudence and the bedrock presumption of innocence, is useful to achieve the "Democratic dream" articulated so candidly by Mr. Fallon, they're going with it.  It's disgraceful.  It really does seem like some of these bad actors do not care one whit about even feigning interest in discerning the truth.  It's all just a means to a desired partisan end, wherein principles and individuals can be embraced and discarded as necessary.

I've said repeatedly that if some credible and verifiable evidence emerges that Kavanaugh is lying, he's finished.    I've also conceded that this isn't a court of law and Kavanaugh doesn't need to be proven guilty beyond a reasonable doubt and have tried to lay out some relatively fair guidelines for how to assess these tricky situations.  But what we have right now is glaringly insufficient, on both the high school and college accusations.  Any reasonable, informed, remotely impartial observer should agree.  So with a number of Republican and Democratic Senators still undecided on the nomination, and with highly-anticipated testimony slated for tomorrow, Mitch McConnell should make sure that every one of his members read the Times piece quoted above.  He should also make sure they're all aware of the cynically-shifting standards being adopted by the Left, in a transparent effort to turn any good faith move Republicans make into a lose/lose proposition.  Here he is laying out the state of play in a biting floor speech (on the heels of another one), taking special aim at the actions of Senate Democrats throughout this entire process:

"In the past week and a half, the American people have seen a confusing and chaotic process play out here in the U.S. Senate. They’ve seen uncorroborated, decades-old allegations of wrongdoing pop up in the press at the last minute, just as Judge Brett Kavanaugh’s confirmation process was winding down. They’ve seen an accuser’s request for privacy disregarded and ordinary standards of fairness discarded. They’ve seen a disturbing pattern play out, on two separate occasions already. It goes like this: Number one, our Democratic colleagues on the Judiciary Committee get wind of -- or maybe even go looking for -- a sensitive allegation. Second, they decline to share it with the majority, meaning the committee cannot promptly take appropriate action. And third, they allow the allegation to leak to the press at the last moment...So we have one side that is handling these sensitive matters with dignity, with professionalism...And we have another side that chose to sit on allegations and keep them secret until they were leaked to the press. The same side as the Democratic Leader, who’d already made his mind up mere hours after Judge Kavanaugh was chosen and said -- quote -- ‘I will oppose him with everything I’ve got.’ Well, apparently so."

"Evidence matters. Facts matter," McConnell goes on to say.  But that's not how some Democrats and left-wing allies are approaching any of this. Jonah Goldberg is right on this point: "Real witch hunts aren’t about evidence, but belief. Inconvenient facts are discarded, and the convenient ones are larded with innuendo and rumor and thrown at the feet of the accused...when proof is subordinated to mere belief, the standard for evidence is reduced to whatever bolsters the belief."  To wit, CNN's senior legal analyst -- a dyed-in-the-wool leftist -- casually mentioned on-air this week that he thinks the Yale allegation against Kavanaugh (of which even the accuser isn't entirely confident) has "the ring of truth" to it.  Guess what else he evidently felt the same way about?

How did that rape allegation famously turn out?  Oof.  I'll leave you with Kavanaugh's full interview with Martha MacCallum on Monday evening.  As we await tomorrow's  worn testimony, this is a pretty solid preview of what the judge will say under oath -- minus, of course, his responses to inevitable histrionics from Democrats:

I analyzed this segment on the radio shortly after it aired on Fox News. Kavanaugh didn't merely maintain is innocence over and over again, he also offered up additional falsifiable information about himself while declining to opine on others' motives.  This is potentially risky, suggesting that Kavanaugh has either reached a stage of reckless desperation, or he's telling the truth about being wrongly accused.

BREAKING: Supreme Court Strikes Down EPA Plan for 'Transition' Away From Coal Power