Trump: On Second Thought, Let's Not Have a Shutdown Before the Midterms 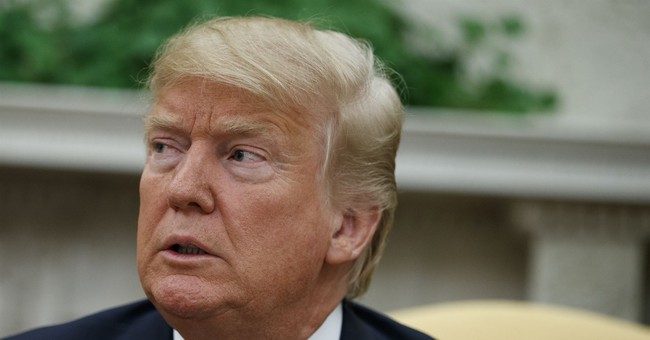 Over the past few days, President Trump has been threatening a government shutdown related to immigration policy, warning Democrats that he'd allow the impasse to occur if they refused to fund his border wall.  Part of the trick to winning the PR battle over a partial federal shutdown is to successfully blame your opposition for the outcome, which American voters consistently hate.  This task is usually easier for Democrats because they have most of the press pulling for them, and some GOP efforts are doomed from the start anyway.  But occasionally, even Democrats can blunder their way into taking an L on an ill-advised shutdown gambit, as we saw earlier this year.  But it's awfully challenging to convince people that the other side is at fault when you're proactively floating the prospect of a shutdown if you don't get your way:

I don’t care what the political ramifications are, our immigration laws and border security have been a complete and total disaster for decades, and there is no way that the Democrats will allow it to be fixed without a Government Shutdown...

This idea has landed with a resounding thud among Congressional Republicans, virtually all of whom recognize that an unpopular shutdown -- triggered by the party in power, just before an election -- would erect yet another difficult hurdle to maintaining the GOP majorities.  Here is the Senate GOP leader tossing cold water on Trump's rhetoric:

McConnell says the Senate is taking steps toward “funding the government in a timely and orderly manner.” Trump has reignited his fight with Congress over funding for a Southern border wall with Mexico. Last week, McConnell said on a radio show in his home state of Kentucky that a government shutdown is “not going to happen.”

McConnell and House Speaker Paul Ryan reportedly thought they'd settled on an understanding with the president not to beat the shutdown drum ahead of November, but after the latest Twitter eruptions, a second round of discussions was arranged.  Rhetoric aside, the shutdown push is back off, according to the Wall Street Journal:

President Trump has been threatening to close down the government if Congress doesn’t meet his immigration priorities, but he has privately agreed to put off a potential shutdown or any fight over border wall funding until after the midterm elections, an administration official said Monday. In recent days Mr. Trump has been warning that he will accept a shutdown when government funding expires on Sept. 30 unless Congress toughens the nation’s immigration laws and comes up with more money for a wall on the Mexican border.  Mr. Trump discussed the budget standoff last week in an Oval Office meeting with top aides and Senate Republican leader Mitch McConnell (R., Ky.) and House Speaker Paul Ryan (R., Wis).

Mr. Trump supports a plan to avert a shutdown before the election by passing some less-controversial spending bills and a short-term patch that would keep the rest of the government running, the administration official said. “The president made it very clear to the leadership that a fight was coming and he’s done putting it off,” the administration official said. Still “he understands the political practicalities of having to put it off until after the election but it’s coming in early November and early December.” He added: “The president sees merit in having this battle after the election.” One possibility under discussion is coupling more modest immigration law changes with some of the near-term spending bills needed to keep the government running, to show some progress on the issue.

So the current saber-rattling is, apparently, a bluff -- or at least a preview of Trump's post-midterm strategy.  Passage of any immigration legislation has proven exceedingly difficult to achieve, even on seemingly consensus-building issues.  Every single immigration vote taken in both chambers this year has failed.  President Trump has put forward a very reasonable (and largely popular) compromise offer that would pair a large 'DREAM' amnesty with border wall funding, changes to chain migration, and the elimination of the "diversity" visa lottery.  It went down in flames in the Senate, and a version of it couldn't even pass the House.  His frustration is entirely understandable.  And although I sometimes believe his rhetoric on immigration is demagogic, unfair, and over-the-top, the idea that we have a safe and secure border is grimly laughable:

A Mexican man was sentenced to eight years in federal prison Monday for illegally re-entering the United States after being deported at least 11 times, in a case that highlighted tension between federal officials and authorities in Oregon, the nation's first sanctuary state. Sergio Martinez-Mendoza, whom officials also referred to as Sergio Jose Martinez, attacked two women in Portland on July 24, 2017, a week after he had been freed from jail where was serving time for interfering with police and providing a false birthdate. He was sentenced in December to 35 years in state prison for those attacks after pleading guilty to sodomy, kidnapping, sex abuse and other charges. Oregon became America's first sanctuary state when it adopted a law in 1987 preventing law enforcement from detaining people who are in the United States illegally but have not broken other laws.

Other sorts of serious, border-related threats also exist, as this little-publicized story makes clear.  MS-13 brutality is not a figment of the president's paranoid fever dreams.  And vetting the people we choose to allow into this country is very important, as this report out of the UK reminds us:

Revealed: The suicide bomber who killed 22 people in the #ManchesterBombing last year had been rescued from the Libyan civil war by the Royal Navy https://t.co/NbnGNAL6sk pic.twitter.com/7xWLlxTXzD

The vast majority of refugees from war-torn areas simply want to survive and pose zero threat to Americans or Westerners.  But some do pose a threat, and it's up to our authorities to work diligently to weed out the dangerous ones.  That includes a clear-eyed (but not exaggerated) understanding of the threat.