BREAKING: All Four DACA Proposals Fail in the Senate, With Trump-Backed Option Gaining the Least Support 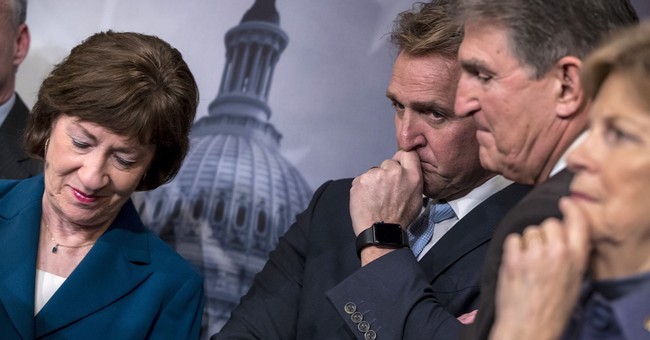 UPDATE - All four votes have failed in the Senate.  The first three options gained simple majority support, but fell six-to-eight of votes shy of the requisite 60.  The Trump-backed proposal didn't even attract 40 votes.  Here are the tallies of each doomed amendment:

Now what?  My suggestion for a compromise is detailed below.  One other intriguing option involves looking at the 'PILLAR' bill, which would check a lot of Trump's boxes, but with a pro-immigration twist.  Another thought: How would a vote go on a fairly straightforward, 'clean' DACA-amnesty-for-border-security trade?  It would offer legal status and a path to citizenship to current DACA recipients only (not all 1.8 million eligible illegal immigrants in the category), and bar them from sponsoring their parents for citizenship -- in exchange for the White House's fully-funded (up front) border wall and security request?  Nothing else attached.  Yes, this would lack two of Trump's demands, but the amnesty would be substantially less expansive.  Is Washington capable of making a deal, the basic outline of which seems painfully obvious, that would achieve policy goals supported by the vast majority of Americans?  Prospects are looking dim at the moment.  It's pretty pathetic.

ORIGINAL POST - Let's start with an elementary reality check: Any immigration bill pertaining to the looming DACA deadline can only become law if it accomplishes three things: (1) Attract 60 Senate votes, (2) attract a simple majority of votes in the House, and (3) avoid a presidential veto.  All three tasks are challenging, with the dynamics and demands associated with each one very much in flux.  Working in reverse order, the president had previously indicated that he's sign any DACA bill that arrives on his desk, but now says he'll oppose anything that doesn't entail the "four pillars" of a plan he laid out in his State of the Union Address.  Meanwhile, House Republicans don't seem to be on the same page (neither are House Democrats), with leadership stressing how complicated the issue is within the GOP conference.  The party's right flank is also stirring the pot by issuing warnings and veiled threats against the Speaker.

But the first action is coming in the Senate, where the race is on to build a filibuster-proof majority in favor of, well, anything.  Majority Leader Mitch McConnell kept his word and has opened up the legislative process, allowing lawmakers to basically craft compromise legislation from scratch.  All week, Democrats -- who knew this was all coming, and in fact demanded that promise from McConnell -- have failed to rally around a single strategy or plan, repeatedly objecting to proceeding to alternating amendments from each side of the aisle.  It looks like that this Democrat-caused standstill will end today, with McConnell preparing to file cloture on four proposals.  Here's what they are:

(1) The bipartisan bill co-sponsored by Delaware Democrat Chris Coons and Arizona Republican John McCain, offered by Democrats.  This version of a DREAM Act pact is widely seen as a non-starter among most conservatives, as its border security elements are exceptionally weak.  The White House has called it totally unacceptable to the president.

(3) A bipartisan deal hammered out by a working group of 16 Senators (effectively eight Democrats and eight Republicans) that goes significantly further than Coons/McCain, but falls well short of Trump's stated preferences on a number of levels.

(4) The White House-backed Grassley bill, co-sponsored by a number of conservative members, that more or less mirrors Trump's plan.  Both the president and McConnell have signaled their support for this plan, but it seems extremely unlikely that it will get to 60 votes.

So the real attention appears to be centered around that third option.  Can it get to 60 votes, as things stand?  That's still an open question.  A number of liberal Senators on the left end of the Democratic caucus are apparently uncomfortable with it because it's seen as too much of a giveaway to Trump (I'm dubious), but quite a few conservatives say it doesn't go nearly far enough.  Here are the basics, via the New York Times:

[It] would appropriate $25 billion for border security, including construction of the president’s proposed wall at the Mexican border, over a 10-year period — not immediately, as Mr. Trump demands. It would also offer an eventual path to citizenship, over 10 to 12 years, for 1.8 million of the young undocumented immigrants, but would preclude them from sponsoring their parents to become citizens. It would make no changes to the diversity visa lottery system, which Mr. Trump wants to end.

A note about the wall funding from Fox News Hill producer Chad Pergram:

In other words, $2.5 billion of the wall funding would come up front, and it would take a supermajority of a future Senate to undo the rest of the appropriations, which would be delivered over the span of a decade, eventually meeting Trump's full funding demand. According to Politico, the proposal would not allow legalized DREAMers to sponsor their parents to become citizens (as the Times also reported), would bar legal permanent residents from sponsoring adult, unmarried children, and would instruct law enforcement to prioritize action against illegal immigrants who commit additional crimes (while de-prioritizing or even ignoring all others who arrived in the US prior to an apparently random date in mid-2018).  That last bit seems untenable.  And there's this detail: "Senators were also discussing reallocating the diversity lottery's 55,000 annual visas to a merit-based system, but that language was dropped Wednesday." That blend of ideas may be a start, but I'm not sure it'll be sufficient to pass the House or entice a presidential signature (update: the administration is a hard no on the bill in its current form).  It's premature to write anything off, but if none of the plans get to 60 votes, then what?

For the sake of argument, let's say that legal status and a 10- to 12-year path to citizenship for 1.8 million DACA-eligible illegal immigrants is baked into the cake, which seems to be the case -- and is no small concession, by the way.  For the rest of the bill to enter the zone of viability, lawmakers should: (a) fund more of the wall (plus other border security measures, like the ones called for in the Grassley proposal) up front to help allay "amnesty now, security later" concerns among conservatives, (b) reinsert the dropped language about transferring the diversity lottery's visas to a merit based regime, and (c) narrow the broader "chain migration" debate to simply barring new DREAMer citizens from using their specially-granted legal status from sponsoring any family members to immigrate to the United States.  They should also radically change or get rid of the deal's codified prioritization language restricting other anti-illegal immigration enforcement.  Such a combination wouldn't give Trump everything he wants on all four pillars -- not even close -- but it would include tangible border security while at least making some modest reforms on the remaining fronts (chain migration and the diversity lottery).

The president could say that all four pieces were addressed and boast about getting his wall.  Republicans could say they've improved border security dramatically while affording legal certainty to a very sympathetic group of illegal immigrants (in addition to the obvious human benefit of this move, it would also rob Democrats of a powerful immigration talking point, leaving them on shakier public opinion ground in future related policy debates).  And Democrats could cheer that they saved the DREAMers without caving to the Trump administration's demands of overhauling the legal immigration status quo on "family unification," which is how they frame chain migration.  Everyone gets something in this solution, which occupies a fair middle ground and actually has a prayer of gaining the president's support.  Does Congress want to actually solve this problem or not?  Let's see how the debates and votes go -- which will determine if this process even gets to step two.