Analysis: Amid the Shouting, Ted Cruz Has a Sensible Plan to Alleviate the Child Separation Crisis 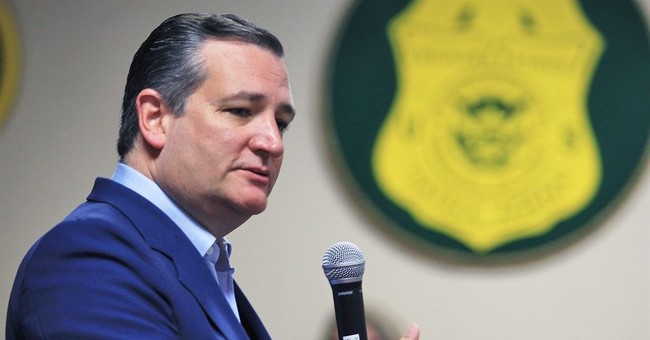 He's often presented himself -- occasionally with complications -- as one of the most 'anti-amnesty' members of Congress, so some political observers are expressing surprise that Ted Cruz is jumping into the fray and breaking with the president on this issue.  There are three explanatory factors in the mix here, I think, and two are obvious.  First, he's a father of two young girls, and the images and audio of terrified, tearful babies being taken away from their parents are difficult for almost anyone to bear (even those of us who place significant blame on the adults who willfully placed their children into this legal limbo by knowingly violating American sovereignty).  Public comments from two Republican First Ladies over the weekend, including the current one, signaled a sea change in public attention and opinion.

Second, he's up for re-election in a border state this year, and a quick perusal of the public polling on this situation demonstrates how gruesome the numbers are on the president's new zero tolerance policy.  In addition to his human impulses, his political instincts are kicking in.  Third, the official White House position at the moment, such as it exists, is that Congress must address the problem through legislative action; Cruz, and other Republicans, can frame their proposals as responses to the president's call.  And with that, fresh off his big win, here's Cruz's proposal:

This, from @tedcruz, seems focused and precise. He's not seeking to leverage the plight of kids for some sort of grand legislative bargain. Here are the key points from his legislation. Objections? I'd like to hear them in the replies below: pic.twitter.com/lCkUNpnvup

The two week timeframe perhaps seems overly ambitious, but I generally agree that this idea is targeted and sensible.  The existing bureaucracy is incapable of processing the sheer number of cases it faces, so more judges and more temporary housing facilities are clearly in order.  Stopping needless family separations is the right thing to do, though the exceptions Cruz stipulates are also no-brainers.  And the priority of granting asylum to those who truly need it (a relatively small fraction of those who apply), then expeditiously deporting those who do not, would be a welcome change from the disastrous "catch and release" status quo that led to so much dysfunction.  In a Facebook post, Sen. Ben Sasse of Nebraska called family separation "wicked," but also explained the problems with the perverse system that existed prior to the Trump administration's change:

This bad new policy is a reaction against a bad old policy. The old policy was “catch-and-release.” Under catch-and-release, if someone made it to the border and claimed asylum (whether true or not, and most of the time it wasn’t true), they were released into the U.S. until a future hearing date. Many folks obviously don’t show up at these hearings, so this became a new pathway into the U.S. Catch-and-release – combined with inefficient deportation and other ineffective policies – created a magnet whereby lots of people came to the border who were not actually asylum-seekers. This magnet not only attracted illegal immigrants generally, but also produced an uptick in human trafficking across our border. (We now also have some limited evidence of jihadi recruiters spreading word about how to exploit the southwestern border.)

Human trafficking organizations are not just evil; they’re also often smart. Many quickly learned the “magic words” they needed to say under catch-and-release to guarantee admission into the U.S. Because of this, some of the folks showing up at the border claiming to be families are not actually families. Some are a trafficker with one or more trafficked children. Sometimes border agents can identify this, but many times they aren’t sure. Any policy that incentivizes illegal immigration is terrible governance. But even more troubling is that catch-and-release rewarded traffickers, who knew they could easily get their victims to market in the U.S.

An acceptable fix to the current problem would involve easing certain rules from the 1997 Flores consent decree (this whole Rich Lowry piece is well worth your time) and explicitly rejecting family separation as a pro-active or default US immigration detention policy, while not reverting back to the bad old days of 'catch and release.'  That's what Marco Rubio is getting at here:

Releasing those who unlawfully enter b/c they came with children creates a cruel incentive to bring children on dangerous journey. Detaining parents is cruel because it separates families. Lets change the law so we can hold families together while awaiting expedited hearings

Senate Democrats have rallied around Sen. Feinstein's bill, but a friend with legal expertise on immigration law (both in theory and real world practice) says its language is "insanely broad" and would have far-reaching unintended consequences.  It's a "hastily written" bill, designed to react to a crisis, rather than a sober-minded plan featuring workable steps to correct it.  As written, it's a messaging bill.  The children at the border don't need messaging.  Over on the House side (where members can see the moral and political disaster unfolding), I wrote about the GOP compromise immigration bill yesterday, which I maintain is smarter and stronger than any of the Senate options I've seen.  Why?  Because it takes a more holistic approach to the issue.  It checks all four boxes on President Trump's so-called 'four pillars' (three of which are pretty popular, and the wall is non-negotiable), helps the 'DREAM' population, and deals with the child separation issue.  It may be wise for House leadership to attach the Cruz language to the finalized legislation.

I recognize that critics will allege that Republicans are 'holding kids hostage' by insisting that other provisions be included in the package that addresses the problem at hand; they'll demand a "clean" bill.  But in my mind, these are all related complications. The children caught up in this current mess are potentially future DREAMers.  If we simply patch up the family separation concern with a bandaid without significantly enhancing our border security capabilities, we are foolishly inviting more replays of scenarios like this in the future, with more 'DREAM' kids whose legal status "must" be normalized.  Our entire immigration system is badly broken, and reacting to each flare-up like whack-a-mole won't actually fix anything, beyond attempting to right discrete wrongs on an ad hoc basis.  Despite her many flaws, Hillary Clinton's point about incentives was correct:

I'd forgotten about this. Hillary Clinton in 2014 on CNN: "We have to send a clear message, just because your child gets across the border doesn’t mean your child gets to stay. We don’t want to send a message contrary to our laws or encourage more to come" https://t.co/kF7VQQtdaz

Parting thought: As we debate the best course of action -- which I think should begin with the Trump administration hitting the pause button on zero tolerance -- we should acknowledge the very difficult complexities at play here.  The facts should matter, even on a highly emotional subject.  Deranged personal attacks and shouting "Nazi" accomplish nothing.  In fact, such demagoguery is toxic and alienating, harming prospects for a viable solution.  And over-the-top heavy breathing about genocide is both deeply insulting to those whose families have experienced the real thing, while serving to desensitize the public to language and comparisons that should be reserved for the most extreme and alarming of circumstances.

UPDATE - Read this definitive takedown of Feinstein's terrible bill.  Legislation should be designed to do more than make politicians feel good while assuring voters that they're "taking action:"

Must read @gabrielmalor on why Senate Democrats’ family separation bill is reckless do-somethingism & would be insane policy: https://t.co/GYDSj7C0I3