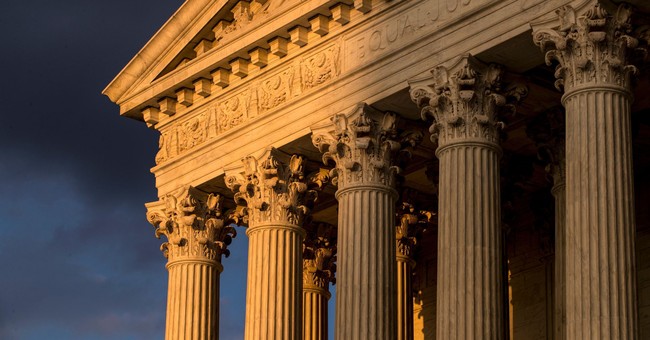 UPDATE - I just spoke to a source with knowledge of this process (remember, I've been writing and talking about Kennedy's likely retirement for months) and asked about the Barnes/Ponnuru list mentioned in the post below.  Are those five names really the finalists?  My source cautioned that with President Trump, anything is possible and that things can always change -- then stated that based on the information to which this person has access at this stage, the very likely answer is 'yes.'  What degree of confidence does my source have that the final nominee will, in fact, emerge from those five?  "Pretty high."  As a point of reference, this individual was also correct about the two finalists in the running prior to the Gorsuch announcement.  So consider this new information, for what it's worth, with that context in mind.

ORIGINAL POST - Despite a series of important First Amendment rulings handed down over recent days and weeks, the biggest Supreme Court news of the term came after the final decision was released: Anthony Kennedy, often regarded as the Court's swing vote, is retiring.  Regular readers will recall that my sources and others had been hearing rumors to that effect for many months; I'm told that Justice Kennedy began telling a small circle of people about his final decision several weeks ago. The SCOTUS vacancy has huge implications -- on the direction of constitutional jurisprudence, on the ideological makeup of the Court (conservatives are hoping for a more reliable fifth vote), on the political climate in Washington (the Left is digging in for a bloody battle), and on the midterm elections (this news, and the fight ahead, represent an instant GOP base motivator, highlighting an issue of upmost importance to many right-leaning voters).

I'd like to address a number of elements of the Kennedy retirement earthquake, starting with President Trump's replacement options.  The White House has confirmed that the next nominee will be drawn from the public list, which has broadly been praised by conservative Court-watchers.  This same pledge was fulfilled with flying colors with the elevation of Neil Gorsuch, and allies are hoping that Trump hits his second home run on this essential, legacy-making front.  The roster features roughly two dozen names, several of which jump out at me.  This is pure speculation, but I'd guess that Trump is being counseled -- and may be naturally inclined, guided by some of his political instincts -- to select a woman or person of color this time.  Identity politics are anathema, but such factors sometimes play a significant role in shaping optics.  Do optics really matter on this issue?  Technically no, but with an extremely closely divided Senate, there's little margin for error.

The feelings and concerns of GOP wildcards like Susan Collins and Lisa Murkowski must be considered.  And while the vast majority of Senate Democrats will likely vote against anyone Trump puts up, a handful of Democratic votes can realistically be secured; part of that process may involve making a 'no' vote look and feel as painful and obstructionist as possible (relatedly, Chuck Schumer really shot himself in the foot by leading a filibuster against Gorsuch).  That's why a right-leaning woman or other 'historic' nominee may -- may -- be in the offing.  And if that's the case, the president's team will surely seek to pick someone who's relatively young, who would be poised to remain on the bench for decades.  Given those possible parameters, consider this:

Within the last year:

- All are on the WH’s #SCOTUS published short list.

As I indicate in the tweet, each member of this trio appears on the president's published roster, none is older than her early 50's, and all have been confirmed by the Senate within the last 12 months -- garnering at least 55 votes apiece.  Judge Eid replaced Gorsuch on the 10th circuit court, having served as a Colorado Supreme Court justice before that (I've heard she's rock solid, but does Trump want to pick back-to-back Coloradans from the same lower court?)  Judge Larsen sat on Michigan's high court before being elevated to the 6th circuit (her credentials are impeccable, and she clearly leans to the right, but the paper trail on her judicial philosophy is rather thin).  Judge Barrett was a law professor at Notre Dame before joining the 7th circuit in October (she has the least experience on the bench of these three, but fairly recently survived a confirmation controversy during which some Democratic Senators appeared to be using her Catholic faith as an unconstitutional religious test against her).  Another person I'd add into the mix is Amul Thapar, Trump's first confirmed circuit court judge (6th circuit), a 49-year-old who was a federal district court judge for years prior to his promotion.  If tapped, Judge Thapar would become the first South Asian-American nominated for the Supreme Court.  Liberal groups are already attacking him.  A few other names to keep an eye on, via other sharp observers:

The potential nominees I am going to spend the most time studying, in alphabetical order: Barrett, Hardiman, Kavanaugh, Kethledge, Thapar.

My opening line: Judge Kavanaugh 2:1; Judges Barrett and Willett 3:1; Judge Larson 4:1. The latter 3 have the advantage of having just recently been on the receiving end of a full field FBI investigation and positive votes. Judge Barrett raises the No Religious Test issue as well

I've also strongly endorsed the idea of plucking Sen. Mike Lee from the US Senate and placing him on the Court (update: he is reportedly in the active mix).  Intriguingly, the Weekly Standard's Fred Barnes says he has information about who's made it through to a list of five finalists (even more intriguingly, see Ponnuru's tweet above), each of whom Ben Shapiro reviews here.  Hmmm.  So when will the conjecture be put to rest with the formal announcement of a nominee?  We put that question to Leonard Leo on Benson & Harf last night.  Leo is on leave from the Federalist Society to reprise his role as senior outside adviser to the president on the Supreme Court vacancy.  Leo is exceptionally influential on these issues, having played an intimate role in the selection and confirmation of Justice Gorsuch.  He told us to expect two-to-three weeks of extra vetting and consultations, after which the nominee will be unveiled.  Beyond that, the Senate traditionally works its way through the confirmation process in 70 to 100 days.  If that all plays out as expected, a new justice could be installed by October.

As I alluded to earlier, people are already doing some quick, back-of-the-envelope calculations about Senate math, in light of various Senators' unique scenarios and interests, as well as current political dynamics.  If this plugged-in analyst is even close to right, Trump and Senate Majority Leader Mitch McConnell have a bit of breathing room, despite being down a vote, due to John McCain's ailing health (on that point, read this):

The nominee will matter, of course, but my guess is it'll be closer to the low 50's -- but who knows?  There will be heavy pressure for all Republican Senators to (once again) support the president's pick; I expect that all, or nearly all, will vote yes, assuming the pick is well qualified and comports him- or herself well.  There will also be enormous pressure on a group of red state Democrats in tough re-election fights; the Left will loudly demand that they back the party in this high-stakes rumble.  But a vote against a strong Trump nominee, on such a massive stage, could prove lethal to the re-election campaigns of Senators representing states carried lopsidedly by the president.  As for Chuck Schumer's latest talking points, I'm inclined to tackle those in a separate post.  Perhaps needless to say, I find them cynical and unpersuasive.  For now, I'll simply leave you with two flashback clips from Senate Majority Leader Harry Reid's fateful 2013 decision to detonate the nuclear option -- the fallout from which has very much informed the events of the last two years, up to and including the handling of the new SCOTUS vacancy:

Mitch McConnell to Democrats in 2013 on going to a simple majority: “You’ll regret this, and you may regret this a lot sooner than you think." pic.twitter.com/qM4pE5p9mi