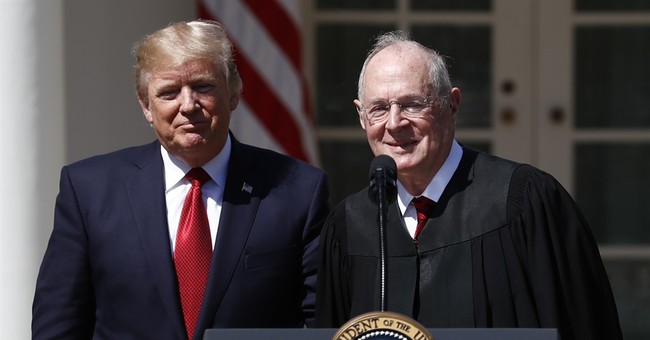 Let's set aside the earthquake of Justice Kennedy's retirement for a moment, and think about the major decision that was handed down today.  Every Supreme Court term features a relatively small handful of highly-anticipated and hotly-debated cases, and this session was no different.  While much of the media's attention has focused intensely on the Court's decision to uphold 'Travel Ban 3.0,' that one isn't -- or shouldn't be -- the signature ruling of 2018, in my view.  Whether or not one supports the administration's underlying controversial national security policy, once initial problems were ironed out and the policy was revised to become "facially neutral," it was clearly constitutional.  Effectiveness and wisdom are not synonymous with constitutionality.  Even many of the decision's harshest critics have conceded that the administration's action would have passed muster under the law if it had been implemented by another president (they argue that Trump's 'Muslim ban' campaign rhetoric evidences discriminatory intent).  Here's a good explainer on why the Court's eventual conclusion was constitutionally correct.  We are a nation of laws, not men, and the law on this point is unambiguous.

My point is that the circumstances that led to this ruling seem fairly narrowly tailored to the current political moment, and the current president.  That's not to say the ruling can't or won't be cited elsewhere, or applied in other meaningful ways.  It is to say that the 'Travel Ban' case and its resulting precedent seems far less momentous and consequential than a trio of crucial opinions -- in which Justice Kennedy factored heavily --pertaining to compelled speech:

Dan McLaughlin, an attorney and legal/political analyst (who's work on another matter I'll quote more extensively tomorrow), shares my take-away:

This, as much as anything, is the story of this SCOTUS Term: the freedom from being made to join or made to agree. https://t.co/8isTmTtZIv

On the same wavelength, Hot Air's Ed Morrissey fleshes out the point: "The Supreme Court finished its 2017-18 term with a bang today in Janus v AFSCME, a ruling which may well transform electoral politics. However, the court’s term — and Janus itself — have deeper implications for free speech and the relationship between individuals and the government, and for that matter between the judiciary and the legislature as well as the people. In its final days...the court has made a powerful case for individual speech and has gone a long way toward deconstructing the levers of government-compelled speech," he writes. The Masterpiece Cakeshop ruling (and a remanding a related case involving a Christian florist) were narrow victories for First Amendment liberties, even if many pro-liberty advocates were disappointed by those decisions' limited scope.  But the alternative would have been far worse, and Kennedy's upbraiding of Colorado's 'human rights' kangaroo court over its overt hostility to religion was a welcome development.

The California case seemed even more cut-and-dried on the First Amendment front: The state passed a law literally forcing anti-abortion pregnancy support centers to advertise abortion, which runs contrary to their entire mission.  The organization's free speech rights were trampled by the state compelling them to amplify state-approved speech about a controversial issue.  If you read the decision, Justices Thomas and Kennedy really "took the gloves off," blasting the idea of the State coercing citizens into engaging in speech or participating in activities that violate their beliefs.  Here's Kennedy, rhetorical guns blazing on his way out the door:

It is forward thinking to begin by reading the First Amendment as ratified in 1791; to understand the history of authoritarian government as the Founders then knew it; to confirm that history since then shows how relentless authoritarian regimes are in their attempts to stifle free speech; and to carry those lessons onward as we seek to preserve and teach the necessity of freedom of speech for the generations to come. Governments must not be allowed to force persons to express a message contrary to their deepest convictions. Freedom of speech secures freedom of thought and belief. This law imperils those liberties.

The Supreme Court delivered a major blow to public-sector unions Wednesday, ruling that they cannot force government workers to join or financially support them.  The 5-4 ruling in the case, called, Janus v. American Federation of State, County and Municipal Employees, by the court's conservative wing overturned a four-decade-old precedent and affects about seven million people. Union leaders expect the ruling to result in major membership losses and drained treasuries as workers, who previously had no choice, start opting out of being involved with unions.

Many conservatives believe that public sector unions shouldn't even exist in the first place, as it's unfair for public servants -- taxpayer-funded employees -- to collectively bargain against taxpayers.  Even FDR was opposed to government unions collectively bargaining against their "employers."  The Janus decision doesn't outlaw government unions, mind you; it simply offers workers the choice (ahem) of whether or not to join, and the freedom to decide if paying money to those unions is worth it to them (which may be influenced by whether they discern the political activities of those unions to align with their beliefs).  Government workers are still free to opt in to unions.  That many will decline to do so speaks volumes about the efficacy of those unions, which will no longer be propped up by coerced dues and fees:

Inherent in many anti-Janus gripes is the nasty little assumption that gov't workers cannot determine what is in their own economic self-interest. If their unions were representing them well, and the (uncoerced) investment was worth it, said unions would be fine, not "crippled."

In summary, the Court ruled that Colorado gravely overstepped in punishing an orthodox Christian business owner for his religious beliefs (even while punting on the core issue), that California violated pro-lifers' rights by compelling pro-abortion speech, and that government sector unions cannot require those public employees who supposedly 'benefit' from their collective bargaining agreements to contribute money to partisan causes that heavily benefit one political party.  The degree to which this could hurt Democrats (reminder: money can't necessarily 'buy' elections) merely further exposes what an astonishingly lucrative racket the previous status quo was for that party.  But that partisan byproduct is secondary to the speech implications considered by the Court.

All in all, it's been a very good stretch indeed for the First Amendment and freedom of thought. I'll leave you with two words of caution, however: First, both the rulings protecting pro-life centers and government worker choice broke 5-4.  The four liberal justices, who almost always vote as a predictable bloc on landmark cases, believed that California's appalling law was just fine.  Same with forced contributions to political causes as an effective term of employment.  As we've seen on other key issues (Heller, Hobby Lobby, etc), SCOTUS is dangerously close to severely curtailing basic American freedoms by reimagining the First and Second Amendments. (By the way, here's a note on the Roberts Court's alleged "activism," and a good thread on why these rulings fall in line with a clear trajectory of First Amendment jurisprudence).  That is alarming unto itself. Second, with a huge battle brewing over Justice Kenned's replacement, consider this:

Don't believe him (or me)?  Read this and this.  The record is quite clear.  And now, the stakes are again very high.