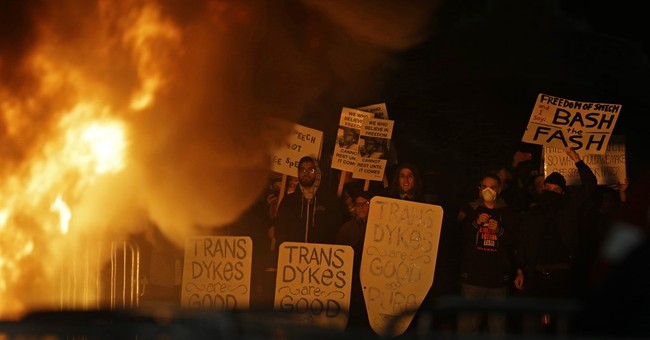 A planned speech by conservative writer and lecturer David Horowitz at the University of California at Berkeley has been cancelled after the university imposed an escalating series of restrictions and costs upon event organizers. After left-wing fascists violently shut down a scheduled appearance by provocateur Milo Yiannopolous earlier this year, university officials informed the campus' College Republicans chapter that bringing another controversial right-leaning figure to speak would now come with new, massive fees and additional obstacles. Rather than doing what it takes to defend freedom of speech and thought at the birthplace of the free speech movement, Cal administrators are punishing conservatives for the unacceptable reactionary tantrums of their ideological opponents, making conservative speech literally less free at the school. San Francisco's CBS affiliate reports:

The university’s efforts to prevent an encore of the violent protests that forced them to cancel a talk by conservative activist Milo Yiannopoulos, have, according to campus Republicans, stifled free speech and made it increasingly difficult to bring conservative thinkers to Cal. Berkeley Campus Republicans spokesperson Troy Worden said, “There is such a thing as the heckler’s veto. Basically, if they’re loud enough and violent enough, then they succeed in shutting down your event.” Campus Republicans canceled an upcoming appearance by David Horowitz after university police told them that to insure they could provide adequate security…the event would have to be held in the middle of the day…and outside the center of campus. UC Berkeley spokesperson Dan Mogulof said, “We’re sorry they had to cancel it. It has nothing to do whatsoever with the speaker’s perspective and everything to do with what law enforcement professionals believed needed to be done to provide a safe and secure event.”

Worden is exactly right to invoke the term "heckler's veto" to describe this silencing dynamic, as the violent Left's appalling behavior is being rewarded by the school. The lesson here is a perverse one: The more violence you foment, the more likely you are to ensure that people with whom you disagree won't be able to voice their views on campus. And the university's spin doesn't fly; the cancellation has everything to do with the "speaker's perspective," even if the administration isn't explicitly making a value judgment on his ideology. Conservatives are not technically banned from addressing on-campus audiences, but the conduct of the torch-and-pitchfork-wielding mob means that anyone wishing to organize such a gathering must fork over large sums of money, and jump through ridiculous logistical hoops, in order for the speech to be considered "secure." It goes without saying that such outrageous limitations do not apply to voices on the other end of the political spectrum, which amounts to de facto viewpoint discrimination. And I do mean outrageous. Via Horowitz's press release:

Horowitz’s hosts, the UC-Berkeley College Republicans, originally invited Horowitz to speak in the late afternoon when most classes are over and students would be available to hear him. But UC administrators insisted Horowitz could speak only at 1PM when afternoon classes are starting and most students would have difficulty attending. The UC police department also instructed Horowitz and the CRs not to advertise the location of the event but to keep it secret until just before the event itself. “In other words,” Horowitz commented, “the Berkeley administration has taken a page out of Orwell. Berkeley promotes itself as the ‘home of the free speech movement,’ but conservatives are free to speak only as long as they remain hidden.” The Berkeley College Republicans agreed to these onerous restrictions under duress, but they were still blindsided by the University’s last-minute bill for security amounting to $5788—which the university claimed was the “bare minimum”—and an estimated $2000+ for rental of the room the University insisted on which was a half-mile away.

Conservatives are welcome to speak at UC Berkeley.  Unless they trigger too many people, that is, in which case they must gather off campus, at a secret location, at an inconvenient time, at exorbitant expense to the sponsoring student group. Free speech! If Berkeley were serious about free expression and pluralistic values, they would use university resources to ensure the safety of the invited speaker and those who wish to hear his remarks. They would insist that authorities crack down on criminal behavior like vandalism, destruction of property, and physical assault (only one arrest was made during the Milo riot). And they would aggressively pursue severe academic sanctions against any students who disrupt the event. Hiding behind these demands and pawning off the cancellation decision on the College Republicans or the campus police is an act of unprincipled cowardice. The school's administration should follow the lead of Middlebury College's president, who has responded appropriately to the disgraceful incident that occurred there last month -- and Berkeley's faculty should embrace the excellent and morally-clear statement of values endorsed by dozens of Middlebury professors. I'll leave you with additional examples of this madness playing out at other campuses just this week, one of which Christine highlighted:

Friend at Indiana U reports there are cops with flak jackets and sniper rifles on roofs of buildings ahead of @charlesmurray talk there.


An unsolicited word of advice to the insufferable toddlers at Duquesne: If you truly cannot tolerate the mainstream political views of a restaurant's owner, don't eat there. That's a sad life to live, but that's your choice. But if that restaurant's mere existence makes you feel "unsafe," it's time to re-evaluate your life. And as for the depressingly necessary show of force in Indiana ahead of a Charles Murray lecture, it's extraordinary how the "safe space" brigade seeks to enforce its dissent-squelching agenda by deliberately undermining the community's actual safety.  I'll say it as often as is necessary: These hecklers must not be afforded the power to veto ideas they don't like. The jackals must not be permitted to prevail. Adults need to be adults, and laws and policies must be enforced. The illiberal trend on campuses is a national disgrace, and bad precedents cannot be allowed to take root.