McConnell: Seriously, Can You Believe These Democrats Are Demeaning $1,000 Bonuses as 'Crumbs'? 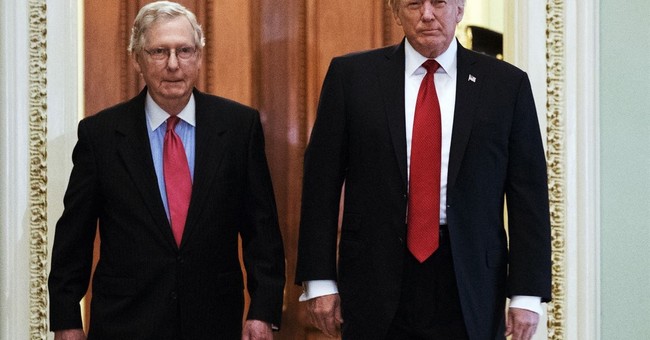 Earlier today, we analyzed the unique and potent platform from which President Trump has a chance to buoy rising public support for his signature legislative accomplishment: The GOP's tax overhaul.  The law has already bounced back from initially-dreadful approval numbers, driven down by misinformation, but there's a lot of selling left to be done.  Our post this morning mostly dealt with the individual side of the equation, urging Trump to press taxpayers and families to scrutinize and compare their pre-reform vs post-reform paychecks, after new withholding tables go into effect early this year.  As we've repeated ad nauseam, eight-in-ten Americans will get a tax cut, including more than nine-in-ten middle class earners.  But a majority of people still believe the opposite will occur.  Correcting that misconception requires focused and persistent work.

That being said, nearly all of the improvement in public opinion on the matter thus far appears to have been been driven by corporate America's response to the new tax environment, under which US companies are no longer burdened with the highest statutory corporate tax rate in the developed world (and one of the highest effective rates, too).  An impressive and growing list of national employers have rolled out a slew of employee-helping and economy-boosting actions, the highlights of which Trump will almost surely trumpet from the lectern this evening.  This will create an optics challenge for Congressional Democrats in the chamber, who uniformly opposed the legislation that is making such an immediate and positive splash:

As Trump touts millions of US workers getting bonuses, pay raises, enhanced benefits + new jobs & repatriated profits + 91% of middle class earners receiving tax cuts, will Dems applaud the undeniably positive outcomes of a law *all* of them voted against? https://t.co/SRiPVQdyeH

Trump already has a litany of tax reform success stories from which to choose for this evening's big event, but in case his team is making any eleventh-hour edits, there are additional examples cropping up just today.  A big dog in the Pharmaceutical industry is getting in on the action:

Pfizer on Tuesday beat the Street's fourth-quarter earnings expectations and laid out its plans for the new tax law...It anticipates a $15 billion tax bill over eight years to repatriate its overseas cash. In wake of the new tax law, the company plans to invest approximately $5 billion in capital projects in the U.S., including building its manufacturing presence. It plans to contribute $500 million to its U.S. pension plan and has allocated about $100 million for a special, one-time bonus for all nonexecutive employees in the first quarter of 2018.  Pfizer also contributed $200 million to the Pfizer Foundation.

Miami-based Ryder System, Inc. will give special tax reform employee bonuses totaling $23 million, the company said in a filing late Monday. Ryder, with locations pretty much everywhere in the USA will pay the bonuses in February to all non-incentive bonus eligible employees. Ryder has 31,300 employees in North America. Ryder manages 234,100 vehicles, has 44 million square feet of warehouse space, has 7,700 drivers, 5,900 technicians, and 800 maintenance facilities.

"Crumbs," some liberals will inevitably sniff, repeating an elitist dismissal that Republicans are rightly blasting as gobsmackingly out of touch.  Here's Mitch McConnell calling out Pelosi, Schumer and Debbie Wasserman Schultz in a floor speech earlier:

Democrats think that $1,000 doesn't "goes very far for almost anyone." Tell that to the hundreds of thousands of American workers for have received some sort of bonus or wage increase due to #TaxReform in the #TaxCutsandJobsAct. pic.twitter.com/IFx0wtw7Xt

Very few Americans watch Senate floor speeches on C-SPAN, but tens of millions will tune in to the president's address tonight.  His megaphone to amplify these points is enormous.  I'll leave you with House Speaker Paul Ryan previewing the State of the Union Address -- beginning, unsurprisingly, by leaning into Republicans' strong economic record:

"You're going to hear the kind of speech most presidents hope they can give, wish they can give, which is, we are doing well. There is a lot of things we have accomplished in 2017. Unemployment is at 17-year low. Economic confidence is at 17-year high. We just overhauled the entire tax system for the first time in 31 years," he said.