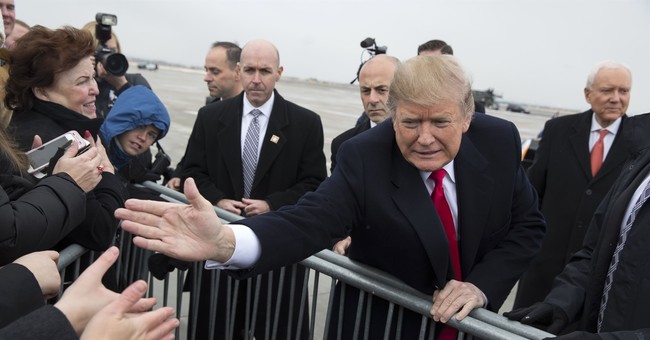 The Trump effect has gone international. The recent tax reform package has yielded immense dividends to the American economy and millions of working and middle class families. Over 150 companies have issued bonuses, increased employee investments, and announced they would boost philanthropic giving. Over two million workers have received bonuses thanks to Trump’s tax bill.

BREAKING: Apple says it will contribute more than $350 billion over the next five years to the US economy through investments, will add "over 20,000 new jobs through hiring at existing campuses and opening a new one"https://t.co/vb0JiOg9hP

Apple is repatriating hundreds of billions in overseas cash now that the rates have been lowered. Some $200-250 billion will now be coming back to the U.S., which is part of the tech giant’s $350 billion investment over a five-year period. It will create 20,000 new jobs in the process. For years Apple had wanted to repatriate the money, but the current tax rates made that an insane move. Now, they’re paying $38 billion in taxes to repatriate the cash. They’re not the only ones. More tech companies plan to bring their cash from overseas. In all, $300-400 billion is expected to be repatriated, with Apple representing about half of the assets. Now, the International Monetary Fund predicts global economic growth is expected to grow thanks to the Republican tax reform effort (via Bloomberg) [emphasis mine]:

The International Monetary Fund warned policymakers to be on guard for the next recession even as it predicted global growth will accelerate to the fastest pace in seven years as U.S. tax cuts spur businesses to invest.

The fund raised its forecast for world expansion to 3.9 percent this year and next, up 0.2 percentage point both years from its projection in October. That would be the fastest rate since 2011, when the world was bouncing back from the financial crisis.

Yeah, remember when liberals said Trump would crash the markets—wrong. The Dow Jones has blown past 26,000. And it had a 5,000-point surge in 2017, the largest annual gain in its history.