Surprise: The States That Hemorrhaged Population Fastest in 2017 Were... 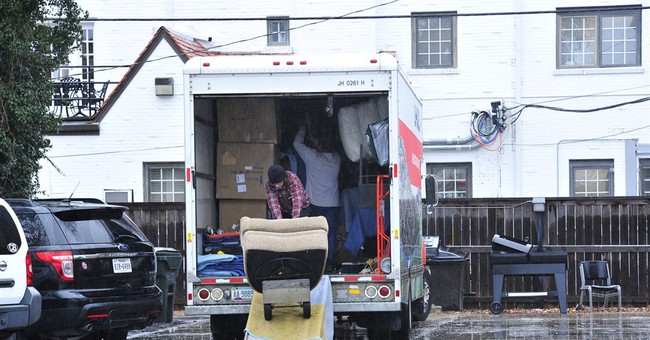 Some of the politicians objecting most loudly to the GOP tax reform law were Democrats from high tax blue states, whose constituents for years have been somewhat insulated from their exorbitant state and local tax bills via an ability to write them off as a federal tax deduction.  Under the new law, those who itemize (a small fraction of taxpayers to begin with) will only be able to deduct up to $10,000 in SALT-related (property tax) expenses.  This will expose some of them, especially those in upper-income brackets, to the true costs of living in tax happy jurisdictions.  These people make up the lion's share the roughly five percent of taxpayers who stand to see a net tax increase next year -- whereas 80 percent of all taxpayers, and 91 percent of middle class earners will get a cut.

Liberal lawmakers are addicted to scapegoating "the rich" for not paying their "fair share" of taxes (the data proves otherwise), and eventually state-level liberals start to scare away productive members of their tax base through demonization and policy punishment.  Which brings us to the annual list of US states from which the most residents are fleeing, according to United Van Lines.  All three top slots go to reliably Democratic states with burdensome tax and regulatory climates.  Republican governors in two of these states have attempted to beat back their legislature's statism in recent years, but Big Government inertia and entrenched special interests are exceptionally difficult to uproot.  So congrats to the champs:

Illinois, New Jersey, and New York were the top states in the nation for outbound moves in 2017, according to data from United Van Lines. United Van Lines, which tracks state-to-state migration patterns, found that Illinois was the top state for outbound migration with 63 percent of moves going out of state. "The Northeast continues to experience a moving deficit with New Jersey (63 percent outbound), New York (61 percent) and Connecticut (57 percent) making the list of top outbound states for the third consecutive year," the report states. "Massachusetts (56 percent) also joined the top outbound list this year."..."As a region, the Mountain West continues to increase in popularity with 54 percent of moves being inbound," the report states. "The southern states also saw a high number of people moving in with 52 percent of total moves being inbound."

This Free Beacon story also cites Tax Foundation research indicating that there is a clear relationship between outbound migration and taxation levels: "There are many reasons why an individual may move, but taxes do play a role," writes Morgan Scarboro, who then quotes a colleague's analysis. "Tax rates and structure affect a state’s economy; states with less burdensome tax structures and lower rates tend to have better economic growth. Increased job opportunities can result from the better economic growth. It is also possible to envision specific instances where tax rates matter directly.  Someone moving to Chicago for a new job could decide to live in Illinois or commute from Indiana. Indiana’s 3.3 percent individual income tax rate could be an encouragement to locate in that state over Illinois’ 3.75 percent rate. An individual moving to the Washington, D.C., area could decide to live in Virginia instead of the District because income taxes are lower."  The WFB piece also quotes a UCLA professor who mentions the continued exodus from the nation's largest state:

"This year's data reflect longer-term trends of movement to the western and southern states, especially to those where housing costs are relatively lower, climates are more temperate and job growth has been at or above the national average, among other factors," said Michael Stoll, economist and professor in the Luskin School of Public Affairs at the University of California, Los Angeles. "We're also seeing continued migration to the Pacific Northwest and Mountain West as young professionals and retirees leave California."

A Los Angeles Times op/ed over the weekend highlighted California's deepening poverty problem, which has been -- ta da -- exacerbated by massive and endless government spending:

Guess which state has the highest poverty rate in the country? Not Mississippi, New Mexico, or West Virginia, but California, where nearly one out of five residents is poor. That’s according to the Census Bureau’s Supplemental Poverty Measure, which factors in the cost of housing, food, utilities and clothing, and which includes noncash government assistance as a form of income...It’s not as though California policymakers have neglected to wage war on poverty. Sacramento and local governments have spent massive amounts in the cause. Several state and municipal benefit programs overlap with one another; in some cases, individuals with incomes 200% above the poverty line receive benefits. California state and local governments spent nearly $958 billion from 1992 through 2015 on public welfare programs, including cash-assistance payments, vendor payments and “other public welfare,” according to the Census Bureau. California, with 12% of the American population, is home today to about one in three of the nation’s welfare recipients. The generous spending, then, has not only failed to decrease poverty; it actually seems to have made it worse.

The essay goes on to track how California eschewed the pro-work welfare reforms of the 1980's and 1990's, opting instead for an explosion of taxpayer-provided benefits. The author notes that the spiral is self-perpetuating: "With 883,000 full-time-equivalent state and local employees in 2014, California has an enormous bureaucracy. Many work in social services, and many would lose their jobs if the typical welfare client were to move off the welfare rolls." One party rule also suggests that there are no realistic mechanisms to enact meaningful reforms, which is why California's Democratic rulers are racing down an insanely reckless path toward single-payer healthcare, which would double the already-bloated state budget, with no means to pay for it.  Better milk those awful rich people some more and push California into a coveted 'top three' slot on the taxpayer departure index.