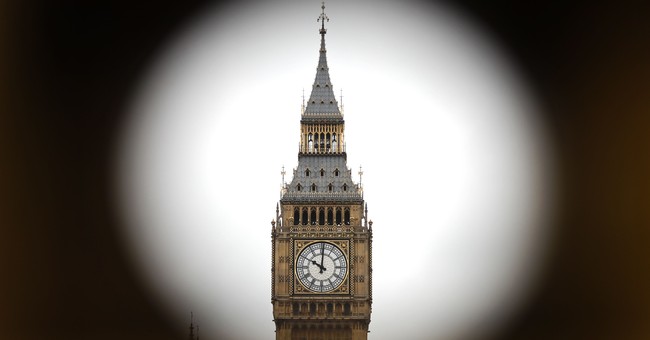 Last time we checked in on Britain's National Health Services -- often hailed as the model of a functioning socialized healthcare regime -- government bureaucrats were proposing a suspension of certain surgeries for smokers and obese patients.  Why?  To alleviate funding crises via an extreme government rationing scheme, under which "NHS will ban patients from surgery indefinitely unless they lose weight or quit smoking."  This proposal was to build off of similar regional cuts that had been already been implemented: "A number of areas have introduced delays for such patients - with some told operations will be put back for months, during which time they are expected to try to lose weight or stop smoking," the Telegraph reported.   That was in October. How are things going across the pond today?  New draconian measures:

Read every word of this story:

Every hospital in the country has been ordered to cancel all non-urgent surgery until at least February in an unprecedented step by NHS officials. The instructions on Tuesday night - which will see result in around 50,000 operations being axed - followed claims by senior doctors that patients were being treated in “third world” conditions, as hospital chief executives warned of the worst winter crisis for three decades. Hospitals are reporting growing chaos, with a spike in winter flu leaving frail patients facing 12-hour waits, and some units running out of corridor space. Sir Bruce Keogh, NHS medical director, on Tuesday ordered NHS trusts to stop taking all but the most urgent cases, closing outpatients clinics for weeks as well as cancelling around 50,000 planned operations. Trusts have also been told they can abandon efforts to house male and female patients in separate wards, in an effort to protect basic safety, as services become overwhelmed...By Tuesday night 12 NHS trusts - including two ambulance services covering almost nine million people - had declared they had reached the maximum state of emergency...

East of England Ambulance Service, also at maximum capacity, said some patients were being sent taxis to get them to hospital, with paramedics stuck in ambulances queuing at hospitals for more than 500 hours in the last four days...A number of NHS trust chief executives described the pressure as “relentless” with several on Tuesday saying they had never seen such pressure during 30 years in the health service. Dr Nick Scriven, president of the Society for Acute Medicine, said: "The position at the moment is as bad as I've ever known. We are simply not coping, we were at full capacity before the sorts of pressures that we should be able to manage - like a rise in flu - is pushing us over the edge. “Things are terrible now, but I am fearful the next few weeks will be horrendous."

A blanket, nationwide ban on all "non-urgent" until at least next month, with overcrowded state hospitals leaving sick and elderly patients in hallways, and treatment in some areas deteriorating to "third world" levels.  Wait times for care have hit 12 hours, with ambulances forming long lines outside hospitals (hardly unprecedented over there) lasting hundreds of combined hours, forcing vulnerable citizens to travel to emergency in taxis and private vehicles, due to a chronic ambulance backlog.  This is single-payer healthcare, operating in an advanced Western nation that has had their system in place for decades.  A fundamentally flawed system, insufficient resources and an aging population are proving to be a recipe for disaster.

And that disaster is exactly what Bernie Sanders and a bevy of Democratic presidential hopefuls have in mind for the American people -- this, despite the stunning fiscal realities that have blocked far-left states like Vermont and California from implementing "universal healthcare" fantasies.  Those stalled proposals would have roughly doubled the entire budgets of each state, offering absolutely no viable plan to make up those extraordinary funding gaps.  The Bernie/Warren wing of the Democratic Party looks at these cautionary tales and responds, "full speed ahead -- let's impose that upon the whole country."  And how would they even start to partially fund their reckless experiment?  Massive across-the-board tax increases on the middle class and working Americans.  That's according to the chairman of their own party.  Back to Britain, and this harrowing statistic, paired with a real-life example of the impact:

More than one in eight patients rushed to hospital in an ambulance this winter has faced a delay of more than 30 minutes on arrival, BBC analysis shows. Patients are meant to be handed over to staff within 15 minutes, but more than 75,000 have waited at least twice as long as that in England. Some of the worst waits had lasted up to five hours, ambulance crews said. Doctors warned the delays put patients at risk, as the prime minister apologised for problems in the NHS...Leah Butler-Smith was with her mother, who was having a stroke, when she was caught in a queue outside Broomfield Hospital in Essex this week. It was five hours until she was seen by a doctor - an experience she described as "scary". "We weren't moving. We weren't going anywhere," she said. Her mother kept falling in and out of consciousness, while she and her sister tried to keep her spirits up. Ambulances continued arriving, making them scared they would be bumped for more urgent cases.  "It's just gobsmacking," Leah said. She said it was too soon to know what affect the delay had had on her mother's health. "The staff are doing all they can. There just aren't the funds for the beds," she said.

If liberal Democrats get their way, these scenes will play out across our country, after 156 million Americans are forcibly uprooted from their existing healthcare plans and dumped into the mandatory government system.  Single-payer healthcare would be terribly disruptive and egregiously unaffordable in the United States, crushing medical innovation, achieving worse outcomes, and hugely expanding wait times for treatment -- all managed by the sort of unaccountable federal pencil-pushers who were responsible for the (ongoing) VA scandal.  And the people pushing this lose-lose proposition are the same group that lied incessantly about the outcomes and consequences of their most recent government intrusion into the US healthcare system.