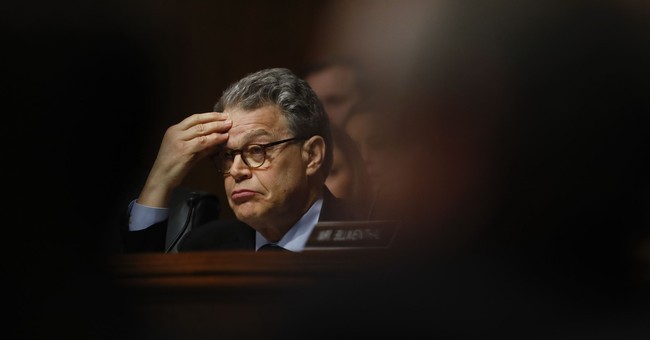 On one hand, this is a potential bombshell.  With Democratic gropers Al Franken and John Conyers finally on the way out, and the GOP divided over what to do if credibly-accused molester Roy Moore wins next week's special election in Alabama, could there be a big pile of shoes still waiting to drop on dozens of sitting members of Congress?  On the other hand, would that outcome really be much of a surprise at this point?  I direct your attention to this account of a tense hearing on the Hill a few weeks ago, at which female members decried and confronted a systemic climate of harassment within the halls of Congress:

After a stunning hearing Tuesday morning where lawmakers acknowledged sexual harassment is a pervasive problem on Capitol Hill, Ryan released a statement saying that the hearing was “another important step in our efforts to combat sexual harassment and ensure a safe workplace.” ... At Tuesday’s hearing, members publicly came to terms with sexual harassment as a pervasive problem on Capitol Hill. Female lawmakers aired tantalizing details, albeit without naming names, of unwanted sexual comments and advances taking place in their midst. “This is about a member, who is here [in Congress] now. I don’t know who it is, but somebody who I trust told me this situation,” Rep. Barbara Comstock (R-Va.) said at the hearing. The male member tricked a young female staffer into meeting him at his residence, Comstock said. When the staffer arrived, he greeted her in a towel, then exposed himself, she said. The staffer left the house and subsequently quit her Hill job, she said. There’s more.

Harassers have propositioned themselves to staff members by asking: “Are you going to be a good girl?” Some have exposed their genitals to victims. Others have grabbed victims by their private parts on the House floor, Rep. Jackie Speier (D-Calif.) said. “In fact, there are two members of Congress, Republican and Democrat, right now, who serve, who have not been subject to review but have engaged in sexual harassment,” said Speier, who has been pushing for years to make anti-harassment training a requirement. Speier said her office has been “inundated” with calls and meetings with former and current staff members, both female and male, who have been subjected to inappropriate and possibly illegal sexual advances.

Around Thanksgiving, Politico reported that members of Congress were "on edge" over the prospect of more allegations spilling into the open.  How many of them are feeling a little edgier this week?

Who is Trujillo?  He's a Democratic strategist who used to work for Hillary Clinton.  Could be be blowing smoke? Maybe.  But is his claim plausible (especially based on the rumors mentioned above), and is it likely that he knows plenty of people at the Post and CNN?  You bet.  Democrats (very belatedly) appear to be embracing a "zero tolerance" approach on these matters, but so far, they've dawdled and made excuses before calling for the ouster of colleagues who occupy safely blue seats.  Will they crawl further out onto similar limbs if it means relinquishing votes?  Even reliably liberal journalists aren't so sure about that:

Not being cynical. I do wonder if Franken’s colleagues would be coming out like this if a Republican was the governor of Minnesota

It's not too cynical to ask that question, considering the cynicism of Senate Democrats who just a few weeks ago refused to commit to immediately expelling a convicted felon who could have been replaced by a Republican.  Speaking of the GOP, the party seems to have no idea how to address their own problems on this front.  Congressional leadership and the NRSC have continued to denounce Roy Moore, demanding that he drop out of the Senate race, and threatening expulsion if he refuses (which he has) and wins (which he very well might).  But President Trump endorsed the guy, and the RNC retreated on its previous abandonment of him, even though zero facts had changed (if anything, Moore now looks worse).  And Texas Congressman Blake Farenthold, who is now claiming victim status, doesn't appear to have any intention to step aside after it was revealed that taxpayers footed the bill for a secret, high-five-figure payoff to a former staffer who accused him of harassment (allegations of which he was reportedly unanimously cleared by an ethics panel).  As far as I can see, only one House Republican (Virginia's Barbara Comstock, who's quoted in the Post story above) has advocated his resignation.  So how do things continue to shake out if ten, 20, or even 30 Congressmen get embroiled in harassment controversies, as journalists (those who haven't been taken down by their own scandals, that is) chase down leads?  It could get messier and uglier than it already is, especially because of considerations and complications like this:

What makes things difficult for Rs: MN voters did not know Franken revelations when they elected him. Alabamans will have elected Moore despite weeks of coverage. By calling for Franken's ouster, Ds didn't have to deal with sentiment that they were overruling judgment of voters.

What if partisan voters want pervs? Or at least are fine with accused gropers and worse, so long as they vote the "right" way in either direction?  Could this be a solution?

A few states require replacement senators to be from the same party as the departing one. That's probably a good idea and would help to get creeps out of office faster. https://t.co/YFAfbgkL9V

I'll leave you with two takes -- one my own -- on Al Franken's defiant, blame-storming resignation(ish) speech yesterday:

'Women must be believed, but not really these 8 women--whose perceived experiences involving our various body parts I respect, by which I mean they're all wrong. As for you, America, it's your fault I have to resign. I'll be fine, ingrates.'

Let Al Franken's legacy as a Senator be that we went out calling women liars.

Parting thought: If Moore wins and isn't unseated, does Franken renege on his "intent" to resign?  And do Democrats rally around him, in that case?  I doubt it, because their plan is to try to shed their heavy, heavy baggage on protecting sexual predators, accumulating over decades, in order to launch a full-fledged attack on Moore, Trump and the GOP in 2018.  On balance, that's far more important to them than protecting Franken or appeasing their base which will be furious in the short term over what they'll see as a double standard.  But it'd be good strategy: If Republicans do the right thing and boot Moore, they'll infuriate a significant segment of their delusional or nihilistic base, hurting their chances in the midterms.  If they abide Moore in the Senate, Democrats will nationalize the issue with rhetorical guns blazing -- and the result among women and independents will likely be devastating, also hurting their chances in the midterms.  The unknown X factor: If there are dozens more creeps left to be outed, and some of them are Democrats who the party faithful really want to defend, their carefully-laid plans on clearing the decks to focus on Moore could blow up on the launch pad.  Either way, stay tuned for the next episode of Perv-a-thon 2017.