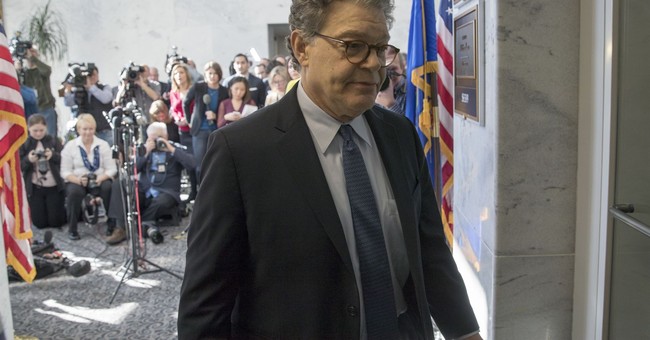 Sen. Al Franken (D-MN) announced on Thursday morning on the Senate floor that he will be resigning from the Senate “in the coming weeks.” Franken said that some of the allegations were “simply not true” and that he remembered others “very differently.”

Franken's resignation was first reported by CNN shortly before Franken's speech. On Wednesday evening, Minnesota Public Radio said that Franken would resign, but Franken denied this at the time.

Immediately after announcing his resignation, Franken immediately pivoted to saying that it was a shame that he was resigning while President Donald Trump, who himself was accused of sexual misconduct, was still the president.

Al Franken: "There is some irony in the fact that I am leaving while a man who has bragged on tape about his history of sexual assault sits in the Oval Office." pic.twitter.com/CKC4qpEPgc

Franken said that his decision to resign was not based around him, but rather for the people of Minnesota.

Notably, Franken did not issue any apologies to any of his accusers during his speech, and implied that many of them were lying. He did not provide a timeline for his resignation, saying only "weeks." His replacement will be appointed by Minnesota Gov. Mark Dayton and will serve until 2018.

Liveblog conclusion: Franken's angry, denial-filled swan song is a strong implicit slap at his Senate D colleagues who threw him under the bus yesterday rather than allow him due process to defend himself. The "moral high ground" they wanted to seize might be slipperier than ever https://t.co/5pAvbnV3sO

That was some speech by Franken. I've seen people more contrite sending back a plate of cold pasta.

This may be the least contrite resigning in disgrace speech ever.

Franken's resignation came after eight women accused him of sexual misconduct over the past decade. On Wednesday, dozens of Franken's Senate colleagues called for him to resign after another accuser came forward.

After the first wave of Senators called for Franken's resignation, his office made an announcement saying that the senator would make an "announcement" on Thursday.

Franken was first elected to the Senate in 2008.

This piece has been updated and will be updated.