Democratic Rep: Nancy Pelosi Knew About My Sexual Harassment Allegations A Year Ago 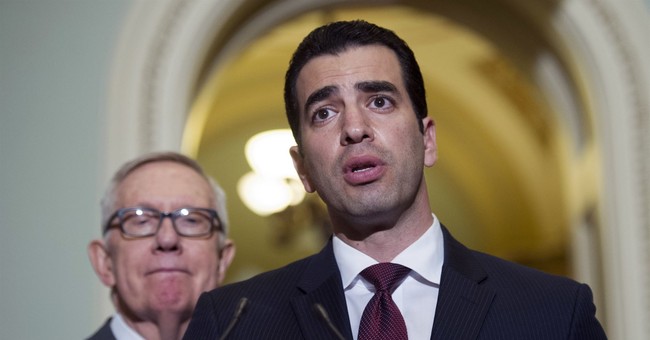 The dam has broken for Sen. Al Franken. Scores of Senate Democrats urged him to resign yesterday, and now he's gone, but one Democratic congressman, Ruben Kihuen, of Nevada has vowed to remain in office, despite leadership calling for him to make his way to the exit over sexual misconduct allegations. Nancy Pelosi has called on Kihuen to step down last week, along with Democratic Congressinal Campaign Committee (DCCC) chair Rep. Ben Ray Lujan (D-NM). Well, Rep. Kihuen lobbed accusations of his own, which is that Pelosi and the DCCC knew of these allegations last year and did nothing, charges that have been denied by her office (via ABC News):

Amid allegations of sexual harassment, embattled freshman Democratic Rep. Ruben Kihuen vowed he will not resign from his post, despite calls from Democratic leaders that he step aside.

Instead, Kihuen is digging in with a shocking allegation of his own, taking aim at the leaders of his own party. In an interview with ABC News, Kihuen, D-Nev., said party leaders knew last year about a former campaign staffer’s allegations of misconduct but stood by his campaign nonetheless. Kihuen questioned why they are calling for his resignation now, more than a year later.

“I do find it interesting that the DCCC, Leader [Nancy] Pelosi and Chairman Ben Ray Lujan -- they knew about these allegations last year,” Kihuen said. “They looked into them. They didn't find anything, and they continued investing millions of dollars in my campaign. They went out there and campaigned for me.”

House Minority Leader Nancy Pelosi and Rep. Ben Ray Lujan, the chairman of the Democratic Congressional Campaign Committee, who are both demanding Kihuen’s resignation, adamantly deny knowing about the allegations against Kihuen before BuzzFeed published a report last week.

“Sadly, this is not the case. Leader Pelosi first learned of these allegations from BuzzFeed last week,” Drew Hammill, a spokesman for Pelosi, said.

“Congressman Kihuen’s statement is not true,” Meredith Kelly, DCCC communications director, said. “We were presented with these disturbing facts for the first time last week, and the chair immediately called for his resignation.”

Democrats spend over $3 million in Kihuen’s race last year. In the meantime, CNN is reporting that Kihuen’s chief of staff sent the resumes of several staffers to other offices on the Hill; a sign that many in the Nevada Democrat’s office might be looking to jump ship. Kihuen’s accuser, names “Samantha,” also alleges that the congressman touched her without consent on her thighs (via Buzzfeed):

A woman who worked as the finance director for a promising Nevada Democrat is alleging that he repeatedly harassed and made sexual advances toward her during his 2016 congressional campaign — and like many young people on campaigns all over the country, she did not know what to do with her complaint and didn’t feel comfortable bringing it to the campaign’s leadership.

Samantha, whose last name BuzzFeed News is withholding at her request, began working for Rep. Ruben Kihuen early in his campaign to unseat Republican Rep. Cresent Hardy in December 2015 and quit by April 2016. Starting in February of that year, Samantha, who was 25 at the time, said Kihuen, who was then 35 and still competing in the primary race, propositioned her for dates and sex despite her repeated rejections. On two occasions, she says he touched her thighs without consent.

While Samantha was uncertain how she could report her experience, she said she spoke with a contact at the Democratic Congressional Campaign Committee to explain why she was quitting so abruptly, and told the staffer that Kihuen had done things that made her uncomfortable.

“I didn’t know what they could do, but I felt like I had to let someone know,” she said.

The person she spoke with at the DCCC, a midlevel staffer who no longer works there, confirmed a conversation took place. He said he did not recall her telling him any specifics, only that she quit because she felt uncomfortable with Kihuen, and he did not believe that she wanted the DCCC to escalate it. He spoke only with a colleague — another midlevel staffer who is also no longer there — about the call.

Because the race was, at that point, still in the primaries, the DCCC had limited involvement in Kihuen’s campaign. But the second staffer informed Kihuen’s campaign manager, Dave Chase, of Samantha’s call after she had left the campaign. Chase confirmed to BuzzFeed News that someone at the DCCC called to say that the woman had quit because she felt “uncomfortable” around Kihuen, but he was not aware of the specifics of the allegations. He says he confronted Kihuen, who denied that anything improper had occurred.

Kihuen then issued an apology:

“I sincerely apologize for anything that I may have said or done that made her feel uncomfortable. I take this matter seriously as it is not indicative of who I am. I was raised in a strong family that taught me to treat women with the utmost dignity and respect. I have spent my fifteen years in public service fighting for women’s equality, and I will continue to do so.”

As the Left regroups after the Franken fiasco, there’s still some house cleaning that needs to occur.